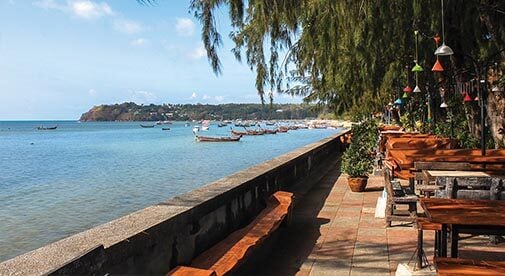 Rawai’s pedestrian promenade is ideal for a gentle stroll alongside the Andaman Sea. © Sean Keenan/International Living.

Phuket’s east coast is not the postcard-perfect series of expansive white beaches that indent the Thai island’s opposite shore. A list of what brings expats there is prosaic and practical: good road connections to the international airport, proximity to the healthcare and amenities of Phuket city, two convenient ferry terminals for inter-island hopping, and the Chalong Bay Marina for sailors.

It’s a place for living, rather than vacationing. Fishing boats offload their catch in the early morning; delivery vans make their rounds; markets, supermarkets, and mechanics busily ply their trades. A wide four-lane highway forms an efficient artery from the small beach towns to Phuket city, and is lined with businesses ranging from tiny push-along breakfast stalls up to vast Tesco and Makro hypermarkets. It’s all much more…practical than the sports bars, barbecue joints, and nightclubs of the west coast resorts.

Jack Taylor, a semi-retired engineer/manager from Calgary, Canada, came to Phuket 20 years ago. He’d been working in Jakarta, Indonesia, for a while, and first visited on vacation. His next trip was for a medical and dental overhaul, making use of Thailand’s top-notch healthcare facilities.

“I have nothing but good things to say about the hospitals here. They’re world-class,” he says. “Their equipment is better than in Calgary, but it’s not just that. They have a genuine concern for taking care of you. And it’s so fast. I had a CT cardiogram three years ago. I was in and out the same afternoon, had my results in three hours. It cost a little less than $400. I’ve had other treatments too, over the years. I’d say costs are about a quarter of what they’d be in Canada.”

Eventually, Jack’s trips to Phuket were happening so often, it made more sense to simply stay. He still works a couple of months each winter in the oil and gas industry around Southeast Asia. The rest of the year, Thailand is home.

Rawai, at the southern tip of Phuket, feels a little like it’s the last true fishing village left on the island. As you come over the hill and sweep down to the long waterside promenade, it’s as if the pace has dropped, the clamor of working life has paused for a moment. The village is not much more than a mile-long strip of stores, bars, and restaurants strung out along the main road, but that leafy walkway along the seafront, jauntily decorated with the tables, chairs, and décor of al fresco restaurants, really lends the place a relaxed air.

I meet Jack and his wife, Annie, at the Paradise Beach Bar, just a little outside of Rawai proper. It’s appropriately named. Branching off Phuket’s main highway every few hundred yards, small single-lane roads slope down to the sea. It’s these that lead to the treasures of eastern Phuket: the coves and bays that are hidden from the main drag. We talk at a dark-wood table, shaded by trees, overlooking a tiny beach featuring the full complement of Thai island imagery: longtail boats hauled up, rounded granite outcrops bursting out of the white sand, tropical greenery carpeting the shoreline, and cold beers beading in the warm air.

Dinner for six, with beers for everyone…about $60.

“Rawai still has a village feel. You can go down to the sea gypsy village at the pier, buy seafood for $1.50 a pound, then bring it over the lane to a restaurant that will cook it for you. We do that every time we have guests. Dinner for six, with beers for everyone, comes out at about $60 to $65. If it’s just us, we can go to a mid-range place and get dinner for about $4.50 each. Or street food for $1.50. Rawai’s the place to live for expats who aren’t looking for a gated community experience. For me, the only difficult thing is the language. I can get by, but I don’t think I’ll ever be fluent.”

Jack and Annie live in a Western-style development, in a side-by-side, two-story condo. “It’s got two big bedrooms, another bedroom that I use as an office, utility room, two full bathrooms,” Jack says. “We paid 3 million baht for it six years ago. That’s about $95,000. Things are definitely affordable here. I’d say day-to-day expenses cost about two-thirds of what they did in Canada. Beef is expensive, imported goods too, but fish, pork, chicken, vegetables, those are very inexpensive.”

As for downsides, Jack admits that he finds the long-term visa situation in Thailand quite exasperating. In the last few years, he’s seen more enforcement of the rules, which stipulate that expats provide proof of income of around $25,000 a year, as well as holding Thai health insurance (which costs around $1,260 a year). That’s a stricter set of demands than neighboring Cambodia or Vietnam, which he feels may be off-putting for potential expats.

That said, there are plenty who consider it worth the price. Rawai has a thriving expat population, with weekly billiards tournaments, hiking, diving, and golf scenes, and a buzzing expat hub in the aforementioned Paradise Beach Bar. “I go sailing with friends three or four times a month,” Jack says, talking about his hobbies. “Otherwise, I swim a lot, either in the pool or the sea. I was also very pleasantly surprised by the hiking trails around Phuket. You can do so much, every day. There’s just no excuse not to.”