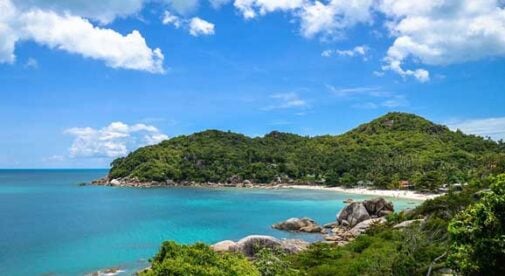 This is a story about Thailand. So, naturally, we start in the Czech Republic…

I moved to Prague three years ago to restart my life as a freelance/contract writer for International Living and other outlets. The experience has been more than I could have initially imagined. I’ve never been happier. The freedom I feel. The lightness of being. I’m unencumbered by all that seemed to weigh me down emotionally and financially in America. The affordability of my life, in turn, means I can do so much more with the money I earn.

People like me—those who leave America for more exciting lifestyles living and working as digital nomads overseas—we were once society’s outliers. We were the weird kids who ran off to weird places, to live and work seemingly without any structure or any promise of earning a sustainable living.

Bloomberg Wealth recently ran a story reporting that workers are quitting their jobs and striking out on their own (many are heading overseas). After more than a year of building a better work/life balance working from home, they’re done with companies trying to bring back the stultifying cubicle culture. The same week, Business Insider ran a story headlined: Workers are ‘epiphany-quitting’ their jobs after the pandemic forced them to rethink everything about their lives.

If the global pandemic has done anything—and frankly it has done more than I can quantify here—it has changed people’s perceptions of their own life and their own ideas of personal happiness.

Which bring us to Thailand (and, I promise, it’s all connected) …

The tropical Southeast Asian nation, known for its beaches and mountainous jungles, is one of the world’s most desirable destinations for digital nomads. Sand, sun, millennia-old culture, fabulous food, a crazy nightlife (at least in Bangkok), relatively quick access to everywhere from the Middle East to Australia, and an affordable, exotic lifestyle.

Alas, Thailand has never been the easiest place to live and work for nomadic expats. If you want to stick around longer than a two-month tourist visa will allow, it usually means making cross-border “visa runs” every couple of months.

Don’t even think about overstaying your welcome. Penalties include arrest, confinement to a detention center, and a ban that could see you denied re-entry into Thailand for 10 years.

Yet, the country has never offered an official freelance-worker visa program. This makes living and working in Thailand burdensome, since legally you need a Thai work permit to earn a buck there and to apply for residency. Though there is an application process for the visa and work permit, the process is a nightmare of bureaucratic red tape for independent workers.

One of the longest-duration visas in the world.

Now, however, things look to be changing. That could be an opportunity for anyone who’s ever contemplated living and working from a beach (or a jungle) in Southeast Asia.

The Tourism Authority of Thailand has put forth a new proposal that would markedly simplify the visa-application process and would award a visa that allows an applicant to live and/or work in Thailand for a decade at a time.

That would make Thailand’s visa one of the longest-duration visas in the world. The proposal targets four specific groups of people:

The plan is a direct response to the pandemic having destroyed Thailand’s tourism industry. It also highlights the government’s growing awareness of a trend among those four targeted groups: The desire to relocate their lives to safer, happier, more affordable locations.

Numerous countries have been jumping on this trend over the last year, particularly in the Caribbean, Europe, and parts of the Middle East. Several of those offerings, however, center on one- and two-year visas, and require proof of annual income of between $50,000 and $100,000.

For someone with the means, who relishes a tropical, Southeast Asian lifestyle, the Thai proposal is a game-changing opportunity. The income requirements are more affordable, and the visa’s 10-year duration means no need to either reapply (with the added costs involved) or leave the country after your document expires (which several of the digital-nomad visas require).

Not only that, the proposed visa comes with a unique perk: It allows you to buy and own land in the country. Currently, foreigners cannot do so. Thai law forbids direct ownership of land by non-Thais. A foreigner can own the house atop the land, but not the land itself, which can present its own headaches.

Land ownership through this proposed 10-year visa program is a meaningful perk for anyone who wants to, say, settle down on their own piece of beachfront property on the Gulf of Thailand, or maybe build a new life in the mountains near Chiang Mai.

Why Even Consider Living and Working in Thailand?

I’ve traveled extensively throughout Asia, from Sapporo, Japan in the north to the Indonesian island of Java in the south. I’ve spent time in uber-modern cities such as Singapore, and those that are only now on the verge of emerging, such as Yangon, Myanmar.

I can say, based on very broad experience, that Thailand is a gem.

I’ve visited various parts of Thailand several times for fun and for research, the last time being a trip to attend a friend’s wedding in Bangkok a few years ago. This part of Asia exudes what Western travelers have come to define as the “exotic Orient” vibe.

Colors seem more vibrant. Flavors are bold and fulsome. There’s an energy and a bustle in Bangkok unmatched anywhere in the West, and it immediately yields to a placid, mañana chill the minute you’re away from the capital. Along the coast are nooks and crannies where you can have the beach and the ocean all to yourself for hours, even days at a time.

Little wonder that Thailand regularly pops up as a target destination for digital nomads. Most recently, it topped a Club Med list of best destinations for the digirati, based on factors including cost of living, safety, internet speed (crucial to us keyboard surfers), and access to nature.

Research from Resume.io, a Netherlands-based online resume maker, shows that Thailand is the fourth-most popular destination for digital nomads, and that Bangkok is “a firm favorite for a post-pandemic influx of nomadic workers.” In large part, that’s a function of the country’s affordable living costs.

For an expat in Bangkok—someone who lives there year-round rather than a nomad who pops in for a couple of months—monthly living costs average about $1,200. And that’s for someone in the center of the city, living a middle- to upper-middle-class life. In Chiang Mai, in Thailand’s cooler, mountainous north, cost of living is less than $800 per month.

As for healthcare, Numbeo has Thailand in the #8 position globally for the overall quality of the healthcare system. The 2021 CEOWorld magazine Healthcare Index ranks Thailand among the very best in the world for healthcare cost and access to medicine.

All of that underscores Thailand’s capacity to address some of the largest concerns that Americans have when it comes to planning a Stateside retirement. The U.S. is exceedingly expensive and growing increasingly more expensive every year. The healthcare system, while good, still trails many other nations, and the costs far outweigh the rest of the world.

As such, destinations such as Thailand stand out for retirees looking to stretch a modest nest egg farther than it will go in America, and for digital nomads who want a tropical, affordable lifestyle in one of the world’s great countries.

Though Thailand’s new visa isn’t yet available, the country’s Board of Investment and the government’s COVID-19 task force have agreed to the details. And that means that soon enough, Thailand could have one of the world’s most appealing digital-nomad visa programs.