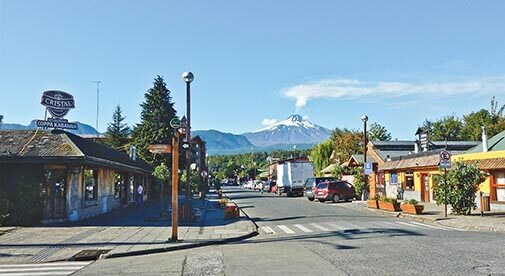 On a clear day, three active volcanoes are visible on the horizon. I’ve learned their names; they’ve become a fixture in my daily life among the Andes Mountains of southern Chile. I watch them from my front porch, birds crossing my vision as they scour the ground for mice and insects. When evening comes, one or two owls will join them, their sound low, like a secret shared only with the warm air.

Chile has not traditionally been included on prime expat or retirement destination lists—but it really should be. With a stable economy, slower pace of life, and easy access to nature, the diverse South American country is a secret gem for anyone seeking to relocate abroad.

I hadn’t expected to stay so long in Chile when I left small-town Illinois to teach English here three years ago, but the country pulls you in with its stunning landscapes, always-ready-for-a-laugh people, and hearty food. In my case, I was pulled in by one particular Chilean—my partner Felipe. A year after we got together, when my temporary resident visa was expiring, we had to decide if we intended to settle in Chile or go elsewhere. We settled in Chile.

The ease of obtaining residence made the decision easier. Chile’s visa process is one of the most painless in the world, making it a good option for expats wanting to live abroad without having to jump through bureaucratic hoops.

After another year of considering the options available to us—rent, buy, or build a house—we stumbled upon a new development selling 5,000-square-meter lots (a little more than an acre) just outside the city of La Unión in the region of Los Ríos. Los Ríos translates to “the rivers,” and the region has certainly earned its name. Rivers and streams crisscross like knitwork, topped off seasonally by the winter rains. While northern Chile struggles with water shortages, southern Chile continues to benefit from an abundance of the stuff.

We fell in love with a lot situated on top of a gently sloping hill, with views to the east of the Oncol Mountain Range, rolling over the land like unmade sheets, and to the west, views of the craggy, snow-capped Andes. Every sightline is overflowing with native forests that occasionally deliver wildlife to the nearby fields.

Once we realized we could buy the land and build a house for only slightly more than it would cost to buy a ready-made house on a lot the fraction of the size, we went for it. We recently finished the house, and the combined cost of the land and our 1,600-square- foot build has settled around $60,000, a steal by any North American’s standards.

With the development set more than a mile back from the main road, we can trick ourselves into thinking we live in the countryside. But in reality, we are less than a 10-minute drive from La Unión’s center, five minutes from the local hospital, and 15 minutes from the highway that runs nearly the length of Chile.

We spend summer days stand-up paddling on the nearby Río Bueno, relaxing on lake-side beaches, and sharing with friends on the patio of our favorite local restaurant. The winter chill drives us inside, but with a fire burning in almost every home in southern Chile, being inside feels cozy instead of confining. Every weekend, we make our way to the local market, full of local fresh fruits and vegetables, homemade jams, ready-to-plant flowers and seeds, and local handicrafts—the food all cheaper and more delicious than any I would find in the local supermarkets or stores in the U.S.

I was able to speak the Chilean dialect of Spanish—tricky, but great fun once you get the hang of it—within about a year- and-a-half, which opened up opportunities to learn from locals, be independent, and make friends beyond the expats I’ve met in nearby cities.

Before fulfilling its destiny as a neighborhood lot, our land was used as farmland, growing wheat and grass for livestock. This meant that we inherited land devoid of trees—there wasn’t a single one to offer shade or protection from the winds that occasionally blast over the Oncol Mountains, pushed forward by the Pacific Ocean less than 40 miles to the east. To fix this, we’ve spent the last few months planting fruit and native trees, as well as clearing ground for a vegetable garden and setting up a rough rain collection system.

Instead of connecting to the available electricity grid, we installed solar panels, choosing as close to an off-grid lifestyle as we are prepared to tackle (and can currently afford). Our lot has become a personalized homestead project, and one that will keep us occupied for as long as we let it.

I’ve never had to pay more than $20 for a quality doctor.

With the freedom and space our house has given us, I’ve moved to working completely online as a freelance writer and editor. Though I have no job inside the country, I still benefit from the public health insurance, Fonasa, and I have never had to pay more than $20 for a quality doctor or hospital visit. Between my freelance work and Felipe’s job as a teacher and IT administrator at a local high school, we’re living a simple but comfortable lifestyle—exactly what we want for ourselves.

I often find myself stopping as I pass our large living room window. I’ll pull it open and let the mountain air drift in, fresh after a heavy rain. I’ll smile as the sun pokes its way through the morning fog, grateful for the life we are building in La Unión.

The Ultimate Expat Guide To Chile