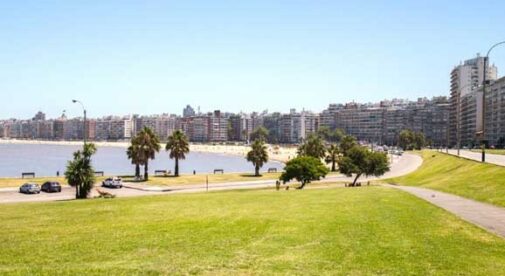 In 2010, Grégoire and Erica Bouthier (now 43 and 38) were between jobs at the same time. They took it as a sign to try a new direction. And moved from Denver, Colorado to Montevideo, Uruguay.

Why Uruguay? “It was a middle ground between Europe where Grégoire’s family lives and the U.S. where my family is,” says Erica. (Grégoire, who worked as an engineer, is originally from Léon, France.)

“Plus, our nest egg could go further toward making a start in South America than in Europe. It was also an opportunity for us both to learn a new language (Spanish).

“Our boxes were packed to move to Buenos Aires, Argentina. But, a month before we planned to leave, a Uruguayan friend recommended we consider Uruguay. She said it was smaller, easier to navigate, and has beaches. And it might be a better fit for starting a family,” says Erica.

Two months after arriving in Montevideo, Grégoire and Erica bought a home. It was in a location they liked. And the view from the rooftop terrace was impressive. “But it was in shambles. So we made a low-ball offer…that was accepted,” explains Erica.

As owners of a 1,000-square-foot fixer-upper in a new country, the couple got to work. “Basically, we renovated every inch of our house from top to bottom, keeping the very antique fantastic features like the stained glass windows and marble staircase,” says Erica.

Grégoire and Erica are food lovers. They start each morning with a visit to their neighborhood farmer’s market where they shop for the freshest and best ingredients for the day’s meals.

“We know the people where we buy our food,” says Erica. When we buy meat, we know our butcher’s name. It’s community-based living. Everything is close. And we walk everywhere.”

Since moving to Montevideo,  Grégoire and Erica had two girls. After the farmer’s market, they walk them (ages six and a half and eight) to school.

In the evenings, the family enjoys going on walks. “We usually walk on the rambla (the city’s coastal promenade) or in Parque Rodó (a large city park). We also like taking the girls out for lunch a couple of times per week,” says Erica.

However, if you don’t have a retirement income, living in Uruguay can pose a financial challenge. Especially if you’re raising a family and trying to get ahead. This is because wages in Uruguay, while high for the region, are lower than in the U.S. and Canada.

So how do Grégoire and Erica support themselves in Uruguay? Like many these days, Erica works online. Fluent in French, she works translating medical transcriptions from French to English for the French government.

Besides that, the couple started their own business—a Montevideo restaurant where Grégoire is the chef.

And since they own their home free-and-clear, they don’t need to pay rent.

Starting Their Own Restaurant

The couple opened their restaurant—Café Gourmand—in 2017. (In French, a gourmand is someone who appreciates and enjoys fine food.)

Montevideo is comprised of 62 neighborhoods. Café Gourmand is in the southern part of the Cordón neighborhood. It’s just a couple blocks from Grégoire and Erica’s home.

Six years ago, Cordón was known as an affordable community with a few pizza places near the state university. When people living in Cordón wanted to go out to eat and/or drink, they often went to restaurants and clubs in the Pocitos Area, two miles to the east; or to spots in Ciudad Vieja (Montevideo’s Old City), two miles to the west.

But then a wave of interesting nightspots, cafes, and specialty shops started opening in the southern part of Cordón. In just a few years, it developed into one of the most fashionable areas of the city. And it’s now referred to as Cordón Soho.

Among the new places that emerged during this food-and-nightlife awakening is Café Gourmand—now ranked one of the very top places to eat in the city.

To get Café Gourmand started, Grégoire and Erica found a commercial space—an old pub that needed a lot of work. “We liked the floor plan,” explains Erica. “So, we cleaned it up. Grégoire built the bar and the kitchen.”

To finish off the remodel, the couple hired a neighborhood graffiti artist to paint a mural on an interior wall. (It’s of the Little Prince.) “We wanted to bring a sense of the local community into the restaurant,” says Erica.

Grégoire and Erica buy their coffee beans directly from a trusted plantation in Colombia. Then, Grégoire roasts the beans in Montevideo.

Regarding the atmosphere, Café Gourmand is a down-to-earth place, where the staff and customers interact like warm neighbors.

“Our daughters go to the public school. We’re extremely happy with it,” says Erica. “It’s paid through our taxes. Plus, the school asks for a monthly donation. We give around $50 U.S. per child.

“The girls bring their own supplies in their backpacks each day. They each have a tablet with their online learning platform to use outside of school and to communicate with their teacher if needed.

“It isn’t perfect. There are a lot of strikes and that means that school is canceled (very similar to France). But our girls speak amazing Spanish and we speak English and French at home,” says Erica.

Regarding health care, Grégoire and Erica have a plan with CASMU, a local hospital-based health care organization. “It includes dental care as well as ambulance service for the girls. It’s currently paid through the restaurant,” says Erica.

(In Montevideo, private ambulance and emergency response coverage for adults costs around $25 per month.)

“We’ve been with CASMU since we moved here. We signed on with our passports and then converted when we got our cedulas. (A cedula is the ID card issued when you become a legal resident of Uruguay.)

“We had both girls in CASMU maternity. They also have an international service plan that we upgraded to when we traveled through Brazil a few years back, says Erica.

In Uruguay, health care is a social security benefit for employees and small business owners. By default, it provides coverage with the public health care system. However, you can opt to apply the health care benefit portion to a private provider, such as CASMU, similar to a voucher system.

(Before Grégoire and Erica opened their business, they paid CASMU directly, which cost around $250 per month for the whole family.)

Not long ago, one of their girls fell more than 10 feet on the school playground. An ambulance took her to the hospital, where she spent more than three hours. Tests included X-rays, a CT Scan, and an ultrasound. Fortunately, their daughter was okay.

And what were the family’s costs beyond their regular social security withholding? “It was about $40 for everything,” reports Erica.

For Grégoire and Erica, making a move to Montevideo worked out well.  “We live in a capital city with beaches. We can go out in the evening and it doesn’t break the bank. And the health care system and schooling is in line with our values,” say’s Erica.