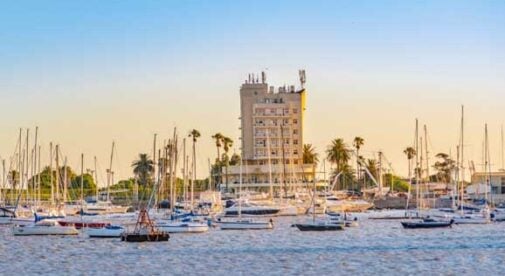 Uruguay is a small country with a small population (around 3.5 million) on the east coast of South America. In decades past, it stood out as one of the safest countries on earth.

Uruguay’s capital city is Montevideo. Half of the country’s population lives in or near it. Older Uruguayans, here, tell me about days gone by when they didn’t need to lock their homes or bicycles.

Punta del Este is Uruguay’s largest beach resort and a college town. Celebrities from both the U.S. and Europe have been known to find refuge in Punta del Este. It has been a place where they could relax and be themselves with no concerns about security or aggressive paparazzi.

While the good old days of almost no crime are gone, Uruguay is still safer than most other countries. For perspective, the 2020 Peace Index ranks Uruguay 35th out of 163 countries. (For comparison, the U.S. ranks 121st.)

Many say Montevideo offers the highest quality of life of any city in South America. And Punta del Este’s still attracts an international jet-set. At the same time, a growing middle-class population is burgeoning in Punta del Este, which includes expats from many parts of the world.

Uruguayan culture is often described as muy tranquilo (very calm). You find less economic disparity in Uruguay than in any other country in Latin America.

Every legal resident gets healthcare without the worry of debt. Every full-time worker is entitled to a benefits package that includes paid holidays, paid vacation time, and a retirement pension.

Sometimes union workers in Montevideo strike or demonstrate for higher pay. But there is little concern of serious civil unrest.

In Uruguay, you also find a relatively safe natural environment. The entire country is part of a low-lying plain south of the tropical zone. So you don’t have to worry about altitude sickness, volcanoes, or tropical diseases.

While dengue fever is common in countries bordering and near Uruguay, thanks to the government’s vigilance, it’s extremely rare in Uruguay.

The few cases that are reported in Uruguay are almost always imported. (Meaning, someone got bit by an infected mosquito in another country and then came to Uruguay.) And when this happens, the infected person is quarantined and protected from coming in contact with local mosquitoes to prevent spread.

Also, Uruguay doesn’t get destructive earthquakes. And while it can get high winds from time to time (called pamperos) it’s not in a hurricane path.

The following is more about crime, along with tips on how to stay safe living in Uruguay. It includes

Keeping Your Money Safe in Uruguay

The official currency of Uruguay is the Uruguayan peso. However, the U.S. dollar is also used. Many ATMs in Uruguay dispense both pesos and dollars.

The Uruguayan peso is used for most everyday expenses, such as gasoline, bus fare, groceries, and restaurant meals. Higher-ticket items like appliances, cars, and real estate are usually priced in U.S. dollars.

With that said, some lower-cost items can be priced in U.S. dollars. And some costlier items are priced in pesos.

Here’s how to tell the difference between prices in pesos and dollars:

Another thing to know is that Uruguayans use a decimal comma and a point for the thousand separators. Like this: $1.000,00

Regarding U.S. dollars, most ATMs in Uruguay dispense either just $50 bills or just $100 bills.

To reduce the likelihood of being overcharged or shortchanged in a store or restaurant, be attentive to what is happening when you pay. Pause any chit-chat.  Put on your glasses if you wear them. And take your time. Check to see the amount due is clear and what you expected. And if paying with cash, make sure your change is counted back correctly.

Since I moved to Uruguay 14 years ago, I’ve accidentally left valuables behind in places like a restaurant, a store, or a street market. (Things like a coat, day pack, umbrella, and once my wallet.) And in just about every case I returned to find my belonging set aside and waiting for me.

While experiences like mine are the norm, there is crime in Uruguay, which includes street theft, car break-ins, and home robberies.

Most street thieves in Uruguay work on foot. They grab a cell phone, handbag, or wallet and make a run for it. Less common are Motochorros—thieves that approach and escape on a motorcycle. Street theft can also include pickpockets.

Street thieves often select targets who seem distracted or leave valuables out. Others, such as pickpockets, may select victims they believe are carrying a lot of cash.

Pay Attention to Your Surroundings

If you need to make a phone call or study a map on the street, stop and do it where you can also stay aware of your surroundings.

Keep Your Valuables Close and in Your Line of Sight

Keep your phone, purse, and other valuables close by. For example, don’t hang your purse or bag over the back of your chair. And don’t leave your phone on a restaurant table while you go to a pickup counter or cash register stand.

Be Cautious of Overly Helpful Strangers

Most Uruguayans are polite, reserved, and will help with things like directions when asked. If a stranger tries to become too familiar too fast—watch out. They may be trying to figure out a way to make a profit from you. (Such as guiding you to a friend’s business where they can get a commission for delivering you.)

Perspective on Street Theft in Uruguay

In Montevideo, you’ll see locals walking down the street while lost in a phone conversation. You’ll see photographers carrying expensive cameras without a worry. And you’ll see people counting their money at a store counter with little concern about who sees it.

As established locals, they’re attuned to the risk level of specific places at specific times. But, as a newbie, it’s smart to error on the side of caution until you get a more complete sense of things.

Thieves in Uruguay can break into parked cars or rob cars with people in them.

In Montevideo, Don’t Leave Your Car on the Street Overnight

If you don’t have a secure place to park at home, rent a space at a secure parking garage. (Either that, or don’t own a car and get around walking and using public transportation like the majority of expats in Montevideo.)

To prevent getting robbed while in your car:

Don’t drive in Montevideo’s more dangerous neighborhoods. (Described in a moment, under Areas to Avoid.)

If you’re a new expat looking for a home to rent or buy, your due diligence should include asking neighbors about the area’s crime history.

In general, apartments are more secure against theft than single-family homes.

Single-family homes in areas where more than 80% of houses are summer vacation rentals are more likely to be targeted by thieves.

Most expats I know with single-family homes have an alarm system.

The majority of violent crime in Uruguay is associated with smuggling along the Brazilian border and in a few Montevideo neighborhoods with organized crime activity.

Violent crimes outside of these areas usually accompany a robbery.

The Montevideo neighborhoods with higher crime rates are located in the northern part of the city, and west of the Port of Montevideo. If you want to go someplace in these areas, or drive through these areas, ask a trusted local about its safety.

The safest areas of Montevideo where expats like to live is a 10-mile stretch between the Port of Montevideo and the coastal neighborhood of Carrasco, and south of Italia Avenue.

In Uruguay, you find bars and nightclubs, which are generally safe.

Many nightclubs don’t get going until 2 a.m. and will stay busy until the sun comes up in the morning.

To stay safe, don’t leave your drink unattended. And don’t be quick to leave with a stranger.

The legal alcohol limit to drink and drive in Uruguay is zero. And city buses get scarce after 11 p.m. So if you drink, bring a designated driver, go home in a taxi, or reserve a remise (a private car-and-driver service).

The most popular way to get around at night is by taxi. However, before you get in a taxi, make sure the driver knows how to get to your destination. Most taxi drivers are very knowledgeable about the city.

However, once and a while you can get a new driver who is also still learning the city and still learning how to use a GPS. In such cases, the driver will likely eventually find where you are going. But only after some trial and error—with the meter running.

The surest way to get around Montevideo at night is using a remise service. The cars are usually very clean. And most remise drivers arevvery professional. A remise will pick you up and drop you off, where and when you like at a preset price. So, you can have your remise waiting for you outside a restaurant or club to take you home at night.

Cross country buses store your large luggage in bays below the passenger compartment. Luggage stored in the luggage bays is tagged. When you arrive at your destination it’s matched to your receipt.

Regarding road safety, Uruguay has a higher percentage of highway fatalities than in the U.S. The highest percentage of fatal accidents involve motor scooters.

As mentioned, many expats in Montevideo, including myself, don’t own a car. We get around fine walking and taking buses and taxis.

If you decide to drive, be especially careful in Montevideo. Many streets bend and curve. Intersections can cross at odd angles. And parking is often difficult to find.

Also, be extra careful driving at night in any Uruguayan city, where pedestrians wearing dark clothes and motor scooters without proper lights can be hard to see.

By law, you need to wear your seat belt and drive with your headlights on (both night and day) on Uruguay’s intercity highways.

Many single women live and travel in Uruguay and are generally quite safe.

If going out at night, most expat women I know go with a friend or a group. The few women I’ve met that go out at night by themselves, go to places in safe neighborhoods where they are regulars and have a way home planned out.

Uruguay is among the safest and most accepting countries for members of the LGBTQ community in Latin America.

In Uruguay, same-sex marriage became legal in 2013. Same-sex civil unions were legalized in 2007. And since 2009, same-sex couples can adopt children.

One thing to watch out for in Uruguay during the summer is getting sunburned. In Uruguay, the midday sun is strong. So, limit your exposure, cover-up, or wear good sunscreen. (Some locals make a practice of staying out of the sun between noon and 4 p.m. in the summer.)

It can rain in Uruguay any time of year. Heavy rains can flood streets in Montevideo and Punta del Este. When this happens, it usually drains off in a few hours.

Some riverfront cities in Uruguay’s interior have buildings and homes constructed in floodplains. So, if you’re interested in a property near a river, check a floodplain map.