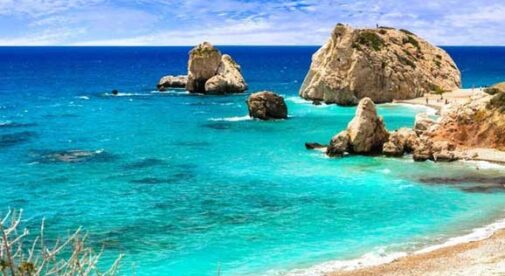 The natural beauty of Cyprus draws visitors and expats from all around the world.

Over the last 6,000 years nearly every major empire around the Mediterranean has occupied Cyprus at some point. And most of them left something behind.

The Ancient Greeks left ruins. They built a temple here to Aphrodite, the goddess of love, then forbade women to enter it.

The Crusaders left castles. The Knights Templar had their headquarters here and actually owned Cyprus outright for about eight months before selling it to a Frenchman.

The British left their language. The British Empire was the last to rule Cyprus—until 1960—and so most of the locals here speak English to at least some degree.

It’s easy to see why everybody wanted a piece of Cyprus. Apart from its strategic location in the Mediterranean, this island has a lot to offer.

A beautiful, subtropical climate with long dry summers and short mild winters. Natural beauty that ranges from stunning beaches to soaring mountains—you can sun yourself on the beaches in summer and ski on the central Mount Olympos in the winter. Warm, friendly people that love to welcome visitors with delicious Mediterranean food and wine.

Two people who appreciate the draw of Cyprus are U.S. expats Jim and Niki Stutzman.

When I talked to them, they were enjoying dinner on their balcony with longtime friends, having just returned from a day trip to the forested Troodos Mountains. They were contemplating a dip in their backyard pool. However, they told me, there’s no rush, as there’s always more halloumi, souvlaki, golden pita bread, chilled white wine, and a sunset to be appreciated.

Jim and Niki live in Europe on a part-time basis, dividing their year between Cyprus and Texas. They spend anywhere from one to four months in Cyprus.

Cyprus is part of the European Union (EU) and is the third-largest island in the Mediterranean. The country is just more than half the size of Connecticut and has about 320 days of sunshine annually.

With coastal landscapes, mountainous terrain, lively cities, quaint villages, and about 10,000 years of history, Cyprus has something to offer everyone. Coastal areas are perfect for swimming, boating, and diving. The Troodos Mountains are known for hiking, biking, and birdwatching; you can even go skiing in the mountains during the winter.

And then there’s the food and wine. Cyprus’ winemaking tradition is believed to date back nearly 6,000 years. Its cuisine is decidedly Mediterranean with Greek, Turkish, and Arab influences. Think olives and flatbreads, rich tomato dishes, and fresh, ripe salads.

“I like all the food, but the seafood is unsurpassed in Cyprus,” says Niki, a retired university administrator.

When it comes to Cyprus’ many attractions, Jim says that he most enjoys visiting the country’s traditional mountain villages. “The scenery up there is beautiful and you get to experience the ‘old culture’ of Cyprus. Also, it is much cooler there in the summer,” he adds.

Niki says that the best time to visit Cyprus is February through June, and September through November.

“The weather is extremely nice around these times and there are not as many tourists,” she adds.

Ten years ago, the couple purchased their home in Paphos, a city of about 36,000 people. Paphos is located on Cyprus’ sun-drenched southwestern coast. The city features a palm-lined promenade, a variety of beaches, and Greek, Roman, and medieval ruins.

“We liked the terrain of Paphos, we have a view of the sea, and there are fewer people here,” says Jim, a retired teacher and West Virginia native.

Niki and Jim’s 1,700-square-foot home has three bedrooms, two bathrooms, and a swimming pool. “It was built for potential foreign buyers. Foreign buyers are mostly British, some Russians, and Chinese. One of Niki’s nephews knew the builder and recommended him,” Jim says.

Niki says that it’s not difficult to create an American-style kitchen in Cyprus. However, she did do a bit of tweaking with the floor plan to make things just right. This included adding a pantry and a central island.

“There are several appliance stores and it’s easy to purchase what you need,” Niki says, noting that she bought her washer, dryer, refrigerator, and other small appliances at the same time.

According to Niki, the selection of products is good in Cyprus. However, prices for electronics are more expensive in Cyprus than they are in Texas. As a result, Niki brought some electronics and household goods with her from the U.S.

Jim says that their routine is roughly the same in Cyprus as it is in the United States. They like to travel, spend time with Niki’s family, and just enjoy life’s everyday happenings. “If we’re at home, we walk the area, go to the grocery store or bank, chat with neighbors, watch TV, and swim in our pool,” Jim continues, adding that they do a lot more driving when running errands in the U.S.

Medical care is available both publicly and privately. “We are covered by our Medicare supplemental insurance,” Jim says. “Our only use of care in Cyprus occurred when I cut my finger badly. I went to an emergency room at a nearby public hospital where I was treated quickly and very well. Treatment was free but a small registration fee of about $2.50 was charged.”

Both Jim and Niki agree that the Cypriot people make life on the island special. “They are friendly, warm, and giving,” says Jim. And Niki stresses how rewarding it can be to befriend the locals. “Don’t be afraid to get to know the Cypriot people—their hospitality is unsurpassed. They will go above and beyond to make you feel comfortable and welcome,” says Niki.

Cyprus: Beaches, Mosaics, and Mythology on a Divided Isle

Wine, Olives, and a Ski Resort: Island Living on Cyprus

International Festivals and Events in Cyprus