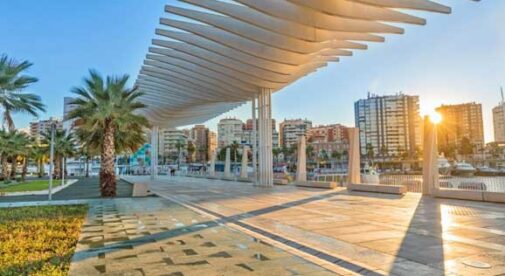 With acres of green spaces, beaches, and sunshine, Málaga is an easy city to enjoy. ©iStock/bbsferrari

“The outdoor life here is phenomenal,” says Canadian-born Maggi Jones. “Everybody goes out and does whatever they can. The weather is always good, and even if it’s not good, it is nothing like my experience of the Canadian winter.”

When Maggi and her husband, Geoff Norris, arrived in sunny southern Spain 16 years ago, they already had a business plan for a cycle-touring venture. As avid cyclists themselves, they had experienced the joy of cycling in Spain.

“It was the main reason we came here, aside from the great food, the weather, and everything.” Maggi says. “They have a wonderful heritage of cycling here. In every village and town, a club goes out every day. Cycling and cyclists are much more respected here, and Spain’s professional cycling races, La Vuelta d’Espana (one of Europe’s three Grand Tour Races) and Ruta del Sol – Tour of Andalusia, guarantee great support among locals.”

Today, Maggi and Geoff operate Málaga-based Cycling Country Tours (See: Cyclingcountry.com). “Cycling Country lets me combine my love of riding bikes with travel and allows me to live in one of the world’s outstanding cycling destinations,” Geoff says. “Running a business in Spain with its slower, more laidback approach, has challenged me not to be so stressed and frenetic about life after my initial career in investment banking. Balance is a good word to live by, especially off the bike!”

The couple met while backpacking in the Middle East, then continued traveling in Asia. Their first cycling trip together was down the East coast of Australia. According to Maggi, it was her idea. “I thought, ‘Hey, this guy is pretty interesting, how best to spend more time with him? He likes cycle touring. Why not propose that we cycle down Australia’s coast?’ This was despite never having cycled since I was about 10 years old, but where there’s a will, there’s a way! So, we did, camping the whole 2,100 miles of it. If you can cycle tour together, you can do anything together. He converted me, and it has been cycling ever since.”

A couple of years later, they moved to London, England where they married in 1999. In 2001, they cycled from London to Turkey. Maggi explains, “On that tour, we decided to think seriously about leaving London to try something that we loved, cycling. We spent the next year after that scouting places and coming up with a concrete idea.”

The bluest skies we had ever seen.

They chose Spain, “for the allure of the bluest skies we had ever seen and the fascinating mixing pot of cultures. It scratched our travel itch and still does.” They originally settled in the charming, traditional pueblo of Alhama de Granada, situated halfway between Granada and Málaga. Maggi says, “We loved Alhama in an instant. It is a gorgeous little friendly rural town set on a gorge, with a medieval heart, against a backdrop of coastal mountains, with a lake and some beautiful bike routes.” Three years later, they became the parents of Ariella Norris Jones.

“We decided to move to Málaga city a few years ago to find a high school for Ariella. Strangely, it hasn’t been difficult jumping back into a city lifestyle,” Maggi says. “I think for anyone living abroad, you have to be outward-looking and ready to change when necessary. Every day is an adventure. After spending 14 years in a small town, the bright lights of Málaga are a fun change, as is the beach!”

Their friends in Málaga are a mix of Spaniards and other Europeans, many of them parents of Ariel’s fellow students at the international high school she attends. The clients of their cycle touring business are from all countries and of all ages, “mainly from the U.S., Canada, Australia, and the U.K. However, we’ve also had cyclists from Japan, Guatemala, and Brazil.” Geoff explains.

“We offer easier tours to those who are looking to explore at a slower pace, with bilingual guides and full van support. We also get riders who want to challenge themselves by climbing some of the toughest roads in Europe. From E-Bikes to carbon road bikes, we cater to all cyclists and levels,” he adds.

Their most popular tour is “Enchanted Andalusia,” a guided and supported tour that covers Granada, Seville, and Córdoba in six or eight days with lodging in luxury hotels. Another favorite is a self-guided, seven-day tour from Granada to Ronda through the traditional “White Villages.”

They are especially proud to be an official VIP tour operator for La Vuelta (Spain’s version of the famous Tour de France) offering bike tours throughout Spain to see the race. VIP access allows guests to ride the roads as the crowds gather, only hours before the competitors, then watch the race from the VIP zone at the finish line.

Maggi adds a bit of advice for expats considering starting a business in Spain, “A lot of people say we are living the dream—running a cycling business. While it’s true, and we have never looked back with regret, Spain is a hard country to start a small business in. Be prepared to work hard and, most importantly, work as a team! If you don’t try something, you’ll never know if you missed out on something amazing!”