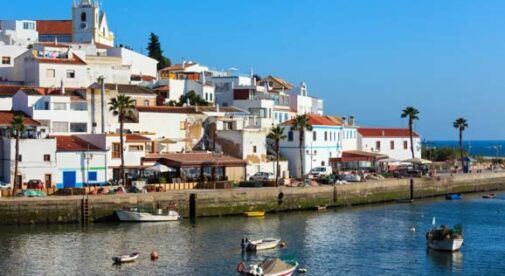 Lagoa, with a population of 26,000, is both a city and municipality in the Faro district of southern Portugal. A typical Portuguese village of white-washed buildings, narrow cobbled streets, and tiled plazas that glow with sunshine year-round. The existence of man in Lagoa dates to pre-historic times, evident by the standing stones called, “menhirs,” found along the roadside along with ancient cemeteries. Early settlers drained the marshes and lagoons, or “lagoas,” to create fertile land fit for farming, still common today.

The area has become a tourist haven with its stunning beaches, water parks, golf courses, cultural heritage, and friendly locals. Whether you are visiting or call Lagoa home there is plenty to do here year-round.

Whether you’re looking to explore historical sites, have some fun in the sun or sip Portuguese wine at corner cafe’s, Lagoa has something for you.

Considered by the Michelin Guide to be one of the 10 most beautiful beaches in Europe and among the top 100 in the world, a stop here is a must. Man-made paths follow the tan and orange variegated cliffs that overlook the turquoise sea below. Jagged rock formations, arches, coves, and caves dominate the clear, blue waters while a small, family-friendly beach snuggles into the cove below. Meander along the paths that follow the cliffs above the sea offering spectacular views or follow the steps down the beach to cool off in the water or chill in the sun.

Perhaps one of the best kept secrets near Lagoa is Praia de Albandeira, a small, secluded beach near Lagoa famous for its arch in the water. The transparent water makes it the perfect spot for diving or snorkelling and since it’s protected by the cliffs the waters are tranquil and safe for children. The soft, golden sand is perfect for relaxing or building a sandcastle to bring out your inner child. Few tourists know about this local beach so let’s keep it a secret!

The city of Carvoeiro is a bustling, tourist hub of restaurants, shops and pubs, great for picking up a bite to eat or enjoying a fun night on the town. The nearby beach by the same name is one of the most popular in the area and swells with crowds during the heat of the summer. A nearby boardwalk goes along the cliffs that surround the town with views of the many caves and rock formations.

Head to the marina and jump aboard a small boat for a trip through the nearby caves of Benagil. On route the boat will pass by other stunning sights like, “boneca,” a natural rock formation that looks like a doll from the water, and the “Algar Seco,” wind-swept rock formations created thousands of years ago. 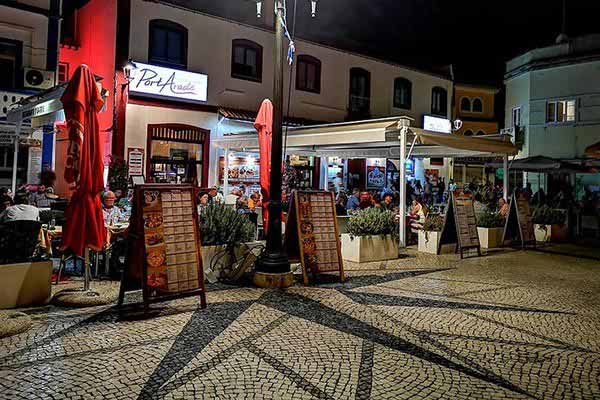 The charming fishing village of Ferragudo is just a short drive from Lagoa and offers more of a sleepy vibe compared to Carvoeiro. The old town has traditional cobbled streets with shops and restaurants offering great seafood, piri piri chicken, and other options to suit every taste. To the south of the town is the São João do Arade Castle, erected in 1640 that still holds a stately presence along the waterfront. Built into such a massive rock, it survived the great earthquake of 1755 which destroyed much of Lisbon and other parts of the country.

The Ponta do Altar Farol, a lighthouse at the tip of the beach, features a unique design. Unlike most lighthouses with large, cylindrical towers, this one features a small, square tower attached to a one-story care takers house. The house is painted white with red trim, making it look more like an old schoolhouse that a lighthouse, yet it still gives a charming ambiance to the waterfront.

Old fishing shacks along one side of the beach can still be seen giving it a feel of yesteryear, among the modern surroundings.

Built on top of a cliff that was once a military fortress and castle, the chapel of Our Lady of the Rock is both romantic and inviting. Sitting along a promontory of bronze and gold rock that extends from the mainland to the sea, it has become one of the most picturesque spots in the Algarve.

Imagine having the wedding of your dreams in this magnificent setting with the sounds of the waves breaking in the background? Or perhaps, for those already married it might be a better idea to renew vows or celebrate an anniversary? Whatever your choice this quaint, little chapel is a must see when exploring the area of Lagoa. 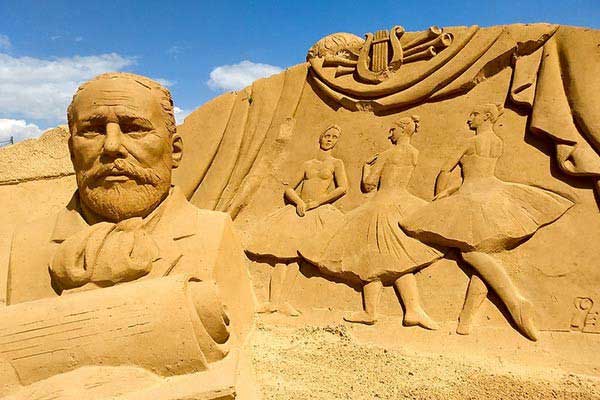 Everyone loves playing in the sand, but some adults have turned it into a career and art form with results for everyone to enjoy. Sand City boasts of having the largest collection of sand sculptures in the world, over 100 larger-than-life creations depicting scenes from around the globe. Stroll along the paths and examine each one in a leisurely fashion then use the same entry ticket to return after dark when the sculptures take on a different look with colorful lighting. A fanciful delight for the young and the young at heart.

A small cafe and restaurant offer a respite from the hot, dry sun. Grab an ice cream or drink before exploring the rest of the sand creations by foot or renting a golf cart to use for your visit.

Aqua Show is not just a water park but has become the first indoor water park on the Iberian Peninsula and the largest in Portugal. This park has something for everyone in the family. Besides the typical water slides, and coasters the park features a lazy river, enormous indoor wave pool, thrill rides, a jacuzzi, and even animal shows to appeal to almost every taste. And with a hotel attached to it, it makes the perfect go-to spot for a family vacation.

Seven Places to Retire in Portugal for Under $30,000 per Year