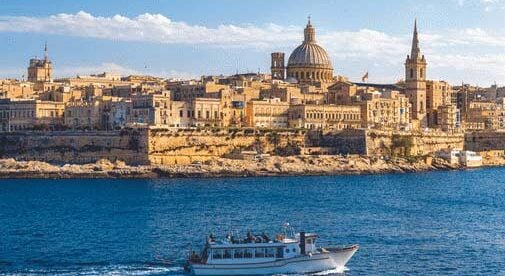 Malta is just 122 square miles in size and boasts over 3,000 hours of sunshine a year. ©LEONID ANDRONOV/iStock.

We looked at each other and said, ‘we’re doing this,’” Gail Klarke says as she reminisces about the moment she and her husband Saul signed the rental lease on their waterfront apartment on the sunny, Mediterranean island nation of Malta.

“We had been talking about moving overseas for a while, casually, while Gail was still working,” says Saul. “We got married late in life and were together 18 years before moving,” Gail says. “I was in finance before retiring in 2019. It was a stressful job and a lot of hard work for a lot of years.” Saul retired in 2013: “I was involved in my family electronics business in sales and marketing and sold my share to family members.”

“In 2013 we visited Malta on a cruise, and we were surprised and delighted to find out how beautiful Valletta (the capital) is and that English is an official language,” recalls Saul. They returned on a cruise again in 2018, and it served as a reminder of how much they liked Malta.

Then the pandemic hit, and so Saul and Gail conducted intense research during lockdown and restrictions from their home in New York City. They started planning their overseas move before telling friends and family their intentions. “In 2020, obviously, we could go nowhere,” says Gail, “so we started doing research on residency and Zooming with friends of friends in Malta, who were so helpful.”

Finally, in July 2021, they made it back there. Working at lightning speed with the help of a real estate agent, Saul and Gail found a modern three-bedroom, two-bathroom, furnished, waterfront-view apartment rental on the coveted Sliema Strand for €2,900 ($2,907) a month. The apartment was move-in ready…all they needed to do was bring their toothbrushes.

“We were drawn particularly to Sliema,” Gail explains, “because it is just a five-minute ferry ride to Valletta. We heard that St. Julian’s (also popular for expats) is more touristy and clubby, and Sliema is more residential.”

Once the apartment lease was signed, Gail and Saul returned to New York City and proceeded to sell everything or give it away. “We had a moving consultant we had used when our parents downsized,” Saul says. “She helped clean out the last of our items that did not sell and connected us with a shipper for some of our art, books, knickknacks, and heavy winter things.” They shipped just two wooden crates, two cartons, and 10 suitcases accompanied them on the plane from JFK to Europe in October 2021.

Saul and Gail used the Malta Permanent Residence Program (MPRP) in order to stay long-term in Malta. To qualify for this, you need to have capital assets of €500,000 and be “economically self-sufficient” (in other words, you have to have the means to support yourself while living in Malta). And the visa is renewed every five years.

Life here has opened a new world of exploring.

For Gail and Saul, their permanent residence process was fast and efficient, taking only a month to complete. They hired PricewaterhouseCoopers Malta who assisted in the process and helped them secure notarized documents, applications, and made the submissions to Identity Malta (the agency in charge of handling residence visas, see: identitymalta.com).

“You have to have a lease or agreement to purchase and health insurance to qualify,” Gail recalls. “They also recommended a real estate agent. PwC made all the appointments for us, and even took us to Identity Malta for our fingerprints and photos. It was like a concierge service. We had to leave to go back to the U.S. before the resident cards were ready, so they gathered them for us and express-mailed them to New York, so we would have them when we returned to Malta in October.” This year, 2022, will be the first year that Saul and Gail are tax residents. In Malta they will be taxed on money they bring in from abroad to spend locally. (For the latest on the visa and residence options in Malta, see: intliving.com/maltavisas)

Life in Malta has opened a new world of exploring for the couple. “We had an agreement that we would travel every couple of months,” says Gail. “It is super easy to see Europe now that we don’t have that six-hour plane ride across the Atlantic.” In comparing life back in New York City to Malta, the couple sees many pros and a few cons. “We go out to dinner with friends and that is still the same,” Saul says. “But in New York we would also go to plays, baseball and hockey games, horse races, and museums. We have similar social occasions, but we are missing the museums and sports.”

“You get used to the fact that in Malta not everything is available all the time,” Gail says. “For example, fruits and vegetables have seasons. There is plenty of food, but not as many choices.” Another example is Amazon delivery, which is available, but expensive. “We became unfortunate VIPs with Amazon in New York during the pandemic. And now we don’t get it here.”

“We are in a beach community in Malta, and although New York is on the water, this feels more like a tropical lifestyle. I am OK with the snow and the cold, but I don’t miss it.” Saul admits.

They have found the cost of living to be generally more affordable than life back in New York City. “I would say grocery bills are fairly similar. Restaurant meals are definitely less. And this apartment with a beautiful terrace overlooking the harbor, this would cost three times as much in New York,” Gail says. Their monthly budget is in the $4,700 to $5,300 range. That includes rent, all utilities, groceries, social events, medical care, and a maid. They have an additional allotment for travel.

Gail and Saul have the luxury of being untethered to their previous homeland. We have no home, no kids, and no great desire to go back,” says Gail. “Our plan is to return twice a year to visit.”

Life in Malta has also offered new activities for the couple. Saul has returned to golfing. “I have not played much since the beginning of the pandemic. It is easy to join the golf club here…there’s only one!” And Gail is learning Italian and volunteering. “I would have done that when I first retired, but COVID shut that down. It is surprisingly easy to join social sets of friends here.” They also swim in the Mediterranean Sea as often as possible. Last year, it wasn’t until November that the water became too cold.

Saul shares this piece of advice to potential expats, “Come and visit for at least a month and see how you like it. We gave ourselves stopping points along the way in case we did not want to move forward with the plan. Also, don’t rush out to see and do everything. The island is small…take your time.

Where to Move to in Malta

Guide to Visa and Residency in Malta