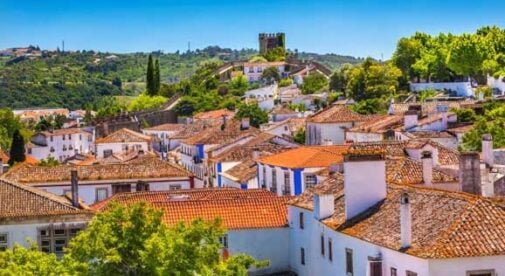 When David Bantz suggested to his wife Sharie Korter that they retire to Portugal, her response was a resounding, “Hell no. I’m not leaving my friends.”

Sharie and David were 70 and 71 years old and still working just to make ends meet in Portland, Oregon. There was no way they could stop working and retire there with the high cost of living, health insurance, property taxes, and a mortgage.

“It was costing us $4,000 a month just for our house, which included over $7,000 a year for property taxes,” says David. “And that didn’t include utilities or anything else.”

Sharie owned and ran her own day spa in Portland and David spent nearly 30 years as a land developer, consultant, and planner. When this busy, active couple were not working, they loved to travel. They explored much of Europe and enjoyed taking Segway tours in the major cities. “It is a fun way to get around and our guides have been great,” Sharie says.

One country stood out and they returned time after time: Portugal. Ultimately it captured their hearts and they knew they wanted to make it home.

“It was the Portuguese people that really sealed the deal for us,” David says. “They are so gracious and welcoming, even to those of us that don’t speak the language.

“Americans are so work oriented, and just live to work. Europeans just work to live and find plenty of time to relax with friends and family.”

Eventually, David convinced his wife to take the plunge and move to Portugal. Finally, they would be able stop working and enjoy life.

In 2019 they sold their house in Oregon along with their businesses, packed up their two cats, and boarded a one-way flight to Portugal. They fell in love with the country’s Silver Coast since it had similar weather to Oregon—summers are spring-like, and winters are mild with rain—and began to search for a home there.

One hour north of Lisbon sits the walled, medieval village of Óbidos. The cobblestoned streets pass through a historic, tiled archway, then climb up toward the castle. Lined with little shops, restaurants, and chapels, the road comes to a dead end at the famed castle that once served as a defense to protect the city. Today the castle is a hotel.

Óbidos comes alive with a yearly medieval festival, a chocolate festival, and Christmas village that lights up the town. During the holiday season the entire wall of the city is decorated with white lights that shine as a beacon from miles away.

Tourists flock there in summer to enjoy a shot of the famous ginjinha of Óbidos. Ginja, as it is commonly called, is a made with ginja berries that are infused with alcohol. Every shop sells the delightful drink in tiny, edible cups made from either white, dark, or milk chocolate at a price of just one euro.

David and Sharie found the perfect home just a 10-minute walk outside the walled city. Their townhome features three bedrooms, two-and-a-half baths, and came completely furnished. “And the best part,” Sharie says, “is that we can sit outside on our terrace and see Óbidos castle.”

As for Sharie’s friends… “I never really left them,” she says. “I just have to open my computer on the kitchen counter and there they are.”

Although David and Sharie are retired they enjoy taking long walks in the countryside in an effort to get in 10,000 steps or more per day.

“We need to stay active in order to compensate for all the wine we drink,” David says. “I cannot believe that restaurants make any money at all selling glass of wine for just $1.50,” Sharie adds.

Eating out in Portugal is very affordable. A typical meal with wine costs less than $20 for two.

David and Sharie estimate that they live on about one-third of the money they lived on in Oregon.

“Since our house is paid for and we can walk most places, which saves us from using the car all the time, we live comfortably on about $2,000 per month,” says David.

They bought a health insurance policy from their bank at a cost of just $130 per month for the two of them. “It does only cover 50% of our healthcare costs, but with healthcare here costing so much less than the U.S., we are not worried,” David says.

“We have made many friends in the years that we have lived here and I feel so blessed,” Sharie adds. “Life is good.”