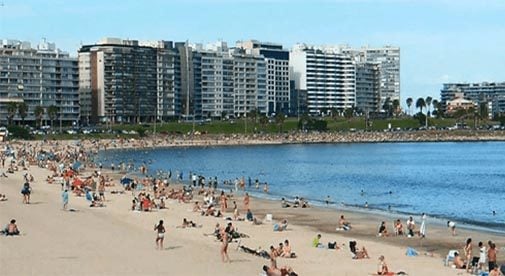 People from many parts of the world find a good life in Uruguay’s capital, Montevideo.

It’s a city of 1.4 million (40% of Uruguay’s population) on the Rio de la Plata, a sea-like estuary that opens to the Atlantic Ocean. Montevideo is comprised of 62 neighborhoods that cover 77 square miles.

The most popular residential district in Montevideo is the Pocitos Area. It’s about two square miles in size, and where you find a long sand beach, roomy green spaces, and lots of close-by shopping and dining options.

Development in the Pocitos Area continues to grow as single-family homes are replaced with 10-story apartment buildings. Today, Pocitos is the most densely populated community in Montevideo. It’s where you find the largest selection of apartments for sale and rent anywhere in the city.

The most popular outdoor space in the Pocitos Area is Pocitos Beach. People from many parts of Montevideo come here during the summer months to enjoy the sun and cool off in the water.

The Rambla of Montevideo is a coastal promenade that runs the full-length of the city, including along Pocitos Beach and the waterfront park areas. People come to the Rambla to walk, run, and bicycle without the worry of car traffic.

At each end of the Pocitos Area, you find a shopping mall. On the East side, next to Montevideo’s World Trade Center towers (technically in the neighborhood of Buceo), you find a mall called Montevideo Shopping. (In Uruguay “shopping” is often used as a noun, as in a place to shop.) In this complex, you find 180 businesses on three levels. It was the first mall constructed in Montevideo, opening in 1985.

On the other side of the Pocitos Area (in the neighborhood of Punta Carretas), is Punta Carretas Shopping, which opened in 1994. It’s where you’ll count 200 businesses on three levels.

Next to Punta Carretas Shopping is a large supermarket called Disco Fresh Market. It’s one of three supermarkets in the Pocitos Area. Inside you find a broad selection of foods, including many imported foods.

For produce and cheeses, you get the best prices at street markets called ferias. Ferias set up one or two mornings per week in several Pocitos locations. You find the largest feria in the area on Saturday mornings in Villa Biarritz Park.

While some people get around Pocitos by car, most walk, ride the bus, or take a taxi.

In the two-square-mile Pocitos Area, you’ll find more than 100 restaurants and cafes. These include barbecue places, like La Otra and Garcia’s. As well as restaurants with wide-ranging menus that include a variety of meats, fish, and pastas like La Perdiz. You also find vegan-only establishments such as Namaste Veggie Resto and Chill Out Bar.

If you’re in the mood for Italian food, choose from the menu option at Fellini’s. For French food, try Bistro Francais. For Armenian food, there’s Erevan. For Indian food visit The Taste of India. Enjoy sushi at Konichi-Wa. And satisfy your craving for Mexican food at La Lupita.

For coffee, choose from dozens of cafes that include Porto Vanila, The Lab, and Starbucks.

For entertainment, you’ll find a multiplex in Montevideo Shopping, three multiplexes in Punta Carretas Shopping, and two stand-alone multiplexes between the two malls.