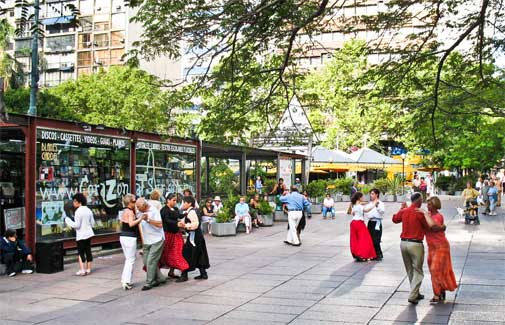 Uruguay is on the east coast of South America between Brazil and Argentina. While it’s a small country with a total population of just 3.5 million, it possesses a rich culture created from its own blend of interesting traditions.

One of the oldest traditions in Uruguay is drinking yerba mate. It’s a practice passed down from the indigenous Guaraní people.

Yerba mate is a tea-like infusion made from the leaves of a certain holly tree that contains stimulants similar to coffee and tea.

The ground leaves, or herb, is called yerba. It’s drunk from a hollow gourd (called a mate) using a metal straw (called a bombilla).

In Uruguay, you can enjoy yerba mate on your own or share it with friends. People drink yerba mate any time of day. You’ll even see people drinking it as they walk along the street.

While it’s still consumed by many in South America’s Southern Cone, Uruguayans drink more yerba mate per capita than anyplace else.

When you barbecue Uruguayan style, the wood is stacked and burned in a steel-rod frame next to the grill. When the coals drop from the steel frame, they’re raked under the grill.

The grill is set at an angle. This enables you to control the cooking temperature, placing food closer or further from the heat of the coals.

3. Eating Gnocchi on the 29th Day of Each Month

In Uruguay, the 29th of each month is known as Dia de los Ñoquis (Gnocchi Day). It’s the day people all over Uruguay eat potato Gnocchi for lunch. It’s a tradition that came to Uruguay with Italian immigrants in the 1800s.

Each 29th, you’ll see ñoquis de papa (potato gnocchi) on restaurant lunch menus throughout Uruguay. After eating, you leave a coin under the plate for good luck and prosperity in the coming month.

Candombe refers to a form of drumming rhythm and the dance associated with it. It started in Uruguay during the early 1800s by descendants of Africans.

In candombe, you find three types of drums, known as tambores. Each drum is played by a separate drummer. Drummers wear their drum by a wide strap for parading. The drums are played with one hand and one drumstick. You need all three drum types to form a complete candombe group, called a cuerda.

Cuerdas are found in communities throughout Uruguay but are most numerous in Montevideo.

You’ll often see small cuerdas of three playing for tips in popular tourism areas. Larger neighborhood cuerdas, with more than a dozen drummers, are often seen (and heard) practicing in their local neighborhoods.

Cuerdas are usually members of carnival parade groups known as comparsas. During Carnival season, comparsas go from town to town to take part in local carnival parades. The largest and most popular parades is Las Llamadas (The Calls) in Montevideo.

“Tango—both the dance and the music genre—developed on both sides of the Río de la Plata (River Plate) in Montevideo, Uruguay’s capital, and Buenos Aires, Argentina in the late 1800s.

In Montevideo, you find tango shows, tango clubs, and a tango museum.

The Tango’s influences include many European music forms as well as milonga (a regional predecessor to tango) and candombe. In fact, the name “tango” is derived from the candombe term tangó which was used to describe the tambor (drum) and the accompanying dance of candombe.