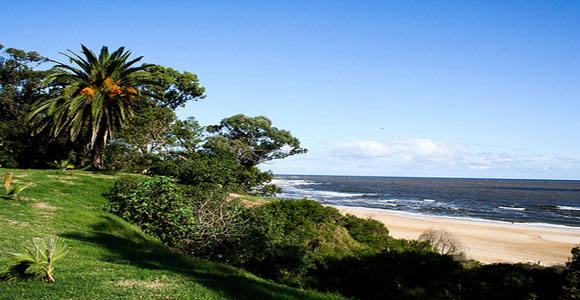 A trip to the South of France inspired Francisco Piria, an Uruguayan developer, to build and promote a Mediterranean-style coastal resort in Uruguay.

In 1905, Piria completed and opened the Grand Hotel Piriápolis, the cornerstone of his project.

The idea was a success and the concept took off.

One of the main draws of Uruguay’s coast is the ideal summertime climate—warm days with a sea breeze and cooler evenings for good sleep.

Because it’s in the Southern Hemisphere, January and February are summer months. July and August are winter months, which get cool but not cold enough for ice and snow.

If you look at the east coast of South America on a map, you’ll notice an indentation along the coastline where Argentina and Uruguay join. It’s a body of water called the Río de la Plata (often called the River Plate by English speakers).

Montevideo is located on the north coast of the River Plate—technically, a huge estuary that’s formed where the Uruguay River and the Paraná River enter the Atlantic Ocean.

To give you an idea of the size of this estuary, the distance across the water from Montevideo to the shore of Argentina is more than 60 miles.

About half of Uruguay’s population of 3.5 million live in or near Montevideo. It’s a city known for its tree-lined streets, large parks, and sand beaches.

In the summer months of January and February, Montevideo’s average daytime high temperature is 82 F.  Nights are cooler. The average summertime low temperature is 64 F.

On summer evenings, many living in Montevideo go to the rambla (the waterfront promenade that runs the full length of the city) to enjoy the cooler air and socialize.

Montevideo’s average annual rainfall of 37 inches (940mm) is spread out fairly evenly through the year.

In summer, Punta del Este’s year-round population of about 25,000 jumps to hundreds of thousands when vacationers and snowbirds arrive.

The average summertime high temperature in Punta del Este is right around 78 F, a little cooler compared to Montevideo’s 82 F.

The average summer nighttime low temperature in Punta del Este is 64 F, the same as Montevideo.

The average summertime sea temperature in Punta del Este is around 72 F. It’s warm enough for beach-goers wearing swimming suites to wade and body surf. In the winter, the water gets cold, requiring a full wetsuit for swimming and surfing.

The Best Time to Vacation in Punta del Este

Punta del Este’s summer climate can be equally nice in January and February.

However, January is the month to see and be seen. It’s when celebrity parties are planned and top-billed fashion shows and tournaments are scheduled. As a result, prices for just about everything including places to stay and rental cars gets a lot more expensive.

If the social scene and events aren’t important to you, come in February. Enjoy great weather and save money. Prices step down significantly after the first of February and step down again after the middle of February.

For those on a tighter budget, March can be a smart time for a Punta del Este vacation. The crowds are gone, hotel and apartment prices are even lower, and the weather, while a little cooler, is often still nice with an average daytime high around 75 F.

Most of the interior is cattle and sheep grazing land. Many areas also have good soil for plant crops.

These good soils, combined with Uruguay’s temperate climate and even rainfall, produce favorable growing conditions for a variety of crops including rice, wheat, soybeans, oats, sunflowers, potatoes, and peanuts.

The nighttime low temperatures in Uruguay’s interior are about the same as Montevideo and Punta del Este. However, the daytime highs are warmer.

January is the hottest month, with average high temperatures from 87 F to 90 F. Average mid-winter highs range from 60 F to 65 F.

Uruguay’s interior also gets more rainfall—from 45 inches to 50-plus inches per year. The City of Rivera gets an average rainfall of 58 inches.

A popular winter travel destination in Uruguay’s interior is the hot spring resorts near the city of Salto.

Another place of interest is the city of Artigas in the very north of Uruguay. From Artigas, you can visit nearby deep-purple amethyst mines and the workshops that cut and process them.

Uruguay’s climate and geographical hazards are minimal. It’s not in a hurricane path. Uruguay doesn’t have earthquakes. And because it’s below the tropical zone, you don’t have the concern of tropical diseases.

Like most places, Uruguay’s climate can deviate from seasonal averages. You’ll have days, weeks, and seasons that will be warmer, cooler, rainier, or dryer than what is average.

You can get spells of heavy rain and thunderstorms any time of year, including the summer.

From time to time, Uruguay gets strong winds, flooding rivers, and periods of drought.

Thanks to Uruguay’s scenic beaches and ideal summer climate, coastal tourism is a major industry.

The temperate climate and even rainfall nurtures a broad range of crops, from rice to apples.

Uruguay’s interior gets warmer daytime temperatures than the coast.

Uruguay doesn’t have hurricanes or earthquakes, but can get strong winds and occasional flooding.