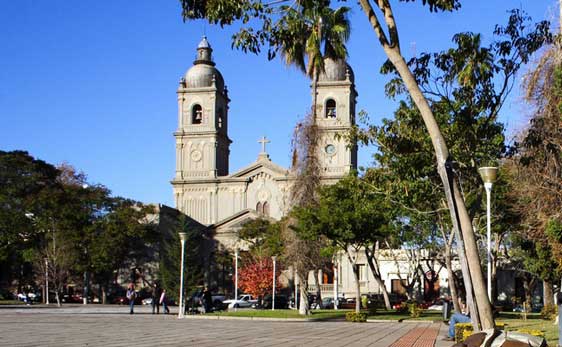 Salto is the second-largest city in Uruguay, with a population of around 105,000. It’s a picturesque place in a region known for hot spring resorts and wineries. And you can live in Salto for less than in Montevideo, Uruguay’s capital.

Founded in 1756, Salto, Uruguay, is a city of mostly low-rise buildings. It’s in the northwest part of the country on the Uruguay River. Salto is 300 miles north of Montevideo, and just across the river from Concordia, Argentina.

The Salto area’s economy is fueled by three major industries:

Agricultural activities close to the city of Salto includes vineyards and citrus groves.

The main tourist attraction in the greater Salto area is the many hot spring parks and resorts, which tap into the hot mineral-rich water of the Guaraní Aquifer. These faculties range from a hot spring municipal park to a 5-star hot-spring resort with an 18-hole golf course.

Eight miles north of the city of Salto, on the Uruguay River, is the Salto Grande Dam. It provides energy for both Uruguay and Argentina. On top of the dam, you find a roadway and railroad connecting the two countries.

You find many stores and interesting shops along Uruguay Street (Salto’s main street). You also find the Salto Shopping mall. It’s the largest shopping mall north of Montevideo, complete with a multiplex.

For medical care, you find both private and public hospitals in Salto.

Restaurants in Salto offer barbecued beef, lamb, and chicken, as well as Spanish and Italian dishes, for less than you’d pay in Montevideo.

If you live in Salto’s centro, you can get by without a car. However, many in Salto prefer to own a car for convenience as well as for outings and day trips.

If you like animals, you may enjoy visiting the zoo in Salto. It’s right in town with 150 animal species.

Just six miles southeast of Salto is the hot-spring resort village of Termas del Daymán. It’s where you find Parque Termas de Daymán. It’s a municipal hot spring park with pools for adults and children, as well as thermal showers. You can spend the day here for less than $4.

Salto is a long-time wine region with both vineyards and wineries. A good winery for a day trip is Bodega Bertolini y Broglio about 12 miles south of Salto.

North of town, just above the dam is Parque del Lago (Park of the Lake). The park includes a sand beach on the lake, a forest, and a picnic area with tables and barbecues.

From Salto, you can go across the river to lunch and browse around the city of Concordia, Argentina, either by driving on the top of the Salto Grande Dam, or in a small passenger boat that departs from the Salto waterfront. In just a few hours, you can enjoy an international adventure and get your passport stamped.

Following are a few examples of what your money can buy in Salto:

As mentioned, rents in Salto are lower than in Montevideo, with lots of apartments and small homes to choose from between $350 and $600 per month.

Cost of Living in Salto, Uruguay

Here’s a sample monthly budget for a couple renting a two-bedroom apartment in Salto: