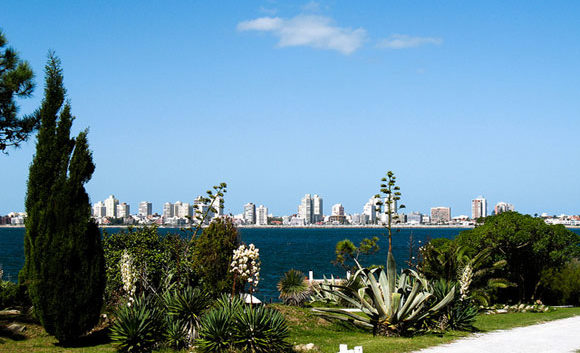 Uruguay’s moderate climate means that visitors can come to travel in Uruguay at any time of the year. However, the summer season shows a marked increase in tourism, due to the Carnaval season and the climate.

Carnaval is celebrated in all parts of the country, but the central events are carried out in Montevideo. Preparations are generally under way by the middle of the previous year and the event itself goes from January to March.

The climate in Uruguay is subtropical, partly humid, and subject to occasional rainfall; there are no major climatic variations from one region to another, but they do exist between seasons. The lack of mountains allows for the free circulation of different winds.

September to April are the most desirable months with respect to climate. Uruguay is not subject to snow, hurricanes, tsunamis, earthquakes, or extreme cold.

There is much to see in this diverse country. The following is merely a sample of some of our favorite tourism destinations…that will hopefully serve to help you when you make your travel plans.

The city of Montevideo, the capital of Uruguay, is situated on the northern coast of the River Plate. It is a modern and open city displaying its colonial past in a peaceful and tranquil setting that makes it a wonderful place to visit as you are traveling in Uruguay. With a clear sense of identity, backed up by customs, traditions, and a strong sense of community, Montevideo ranks as the second-safest large city in South America. This sprawling metropolis boasts a high level of services and infrastructures. It can be considered one of the most secure sites for financial investment in South America. It is ideal as a business as well as a tourist destination.

Montevideo is a dynamic city that combines modernity with a rich history. The European immigration, to which it opened its doors, brought ideas from the “old continent,” the influence of which can still be seen in the city’s architecture, as well as the layout of its avenues and parks.

Montevideo is Uruguay’s financial hub. Most of the country’s major commercial and personal banking activity takes place here. With a temperate climate all year round, this picturesque and progressive city offers visitors a broad range of alternatives: outstanding landscapes…a natural port of deep water…green spaces. All just a few minutes from the city center.

When you are traveling in Montevideo, make sure to stroll along its streets, admire its buildings, and experience the warmth of its people. Montevideans tend to be respectful, kind, and proud of their country. While visiting the town, no one will bother you, let alone even look at you.

When asked his opinion about this phenomenon, a tourist explained: “At the beginning, we were a bit worried, being used to being stared at and chatted to. The apparent indifference and respect in this city was puzzling, until we had to ask for directions… The kindness shown surprised us, and this was not a mere coincidence. They all are like this. By the second day, we would just ask for the pleasure of interacting with locals.”

Time seems to stand still in Colonia del Sacramento. This historic town, founded by the Portuguese in the 17th century, was declared a UNESCO World Heritage Site in 1995. A center stage of historical conflicts between Spain and Portugal, Colonia del Sacramento changed hands numerous times and this is reflected in the differing architectural styles here.

You’re as likely to see Portuguese stone houses with saddle and terracotta tiled roofs as typical Spanish brick houses with flat, terraced roofs. The “Banda Oriental,” as this region was once called due its position in relation to the Uruguay River, was a sort of no-man’s land in the undefined border between the Spanish and Portuguese dominions.

In 1680, the governor of Rio de Janeiro, Maestre de Campo Manuel Lobo, ordered the foundation of a fortified city in what is the present site of Colonia. The history of this area reflects the continuous dispute that existed between Spain and Portugal over possession of the territory. Owing to this, the city underwent an agitated period of almost a century in which sieges, treaties, and alliances developed as the two countries struggled for control of the region. However, after 1777, Colonia remained under Spanish reign until it was deemed to be part of an independent territory of Uruguay. Despite the destruction of parts of the city in the process, it conserved its original Portuguese city plan.

The old city grounds are spread over some 30 acres and are surrounded by a rampart that has been reconstructed together with the moat, gate, fixed bridge, drawbridge, and bastions of St. Miguel, St. Antonio, del Carmen, St. Pedro, and St. Rita.

Named after Luis Rocha, an Argentine who issued permits for the slaughter of cattle here at the turn of last century, the Rocha area is prized for its striking terrain and unique blend of flora and fauna. And there is no place in the world quite like Rocha.

The main populated towns are San Vicente de Castillos, Los Palmares, and Lascano, all of which still deal primarily in cattle raising. This area boasts 112 miles of coastline, spectacular beaches, massive dunes, and a great variety of ecosystems: marshy areas, woods, palm trees, and vast lakes. It also features the biggest forest of ombues trees in the region.

As this area was once a strategic point in the communication between the Brazilian empire and the Viceroyalty of the River Plate, Portugal and Spain fought many battles here as a means of gaining control over the South American territory. Many fortresses built during that time remain for you to see as you travel in Uruguay, such as the fort of Santa Teresa, which was built between 1762 and 1776, and the fort of San Miguel, built in 1734. In addition to this, funerary remains of the native Indians–small groups of elevations found in the marshy areas–can still be seen here.

The people of Rocha have always preserved their identity, their way of life, and their traditions. As such, Rocha is favored among Uruguayans, Argentines, and Europeans as a unique vacation spot.

Close to Rocha, there is a mysterious region of stony hills with valleys and streams, home to a variety of fauna and flora. This is an ideal place for fishing, boating, and bird watching. Hunting is forbidden, as this area is protected.

Known as the Saint Tropez of South America for its unspoiled beaches and exceptional architecture, Punta del Este will amaze you with its variety of sights, luxury hotels, international gastronomy, art galleries, and vibrant nightlife.

The peninsula is divided by Gorlero Avenue, an upscale shopping area. Valentino, Tommy Hilfiger, Donna Karan, Gianni Versace, Nike, and Banana Republic are among the many international brands represented here.

Attracted by the natural beauty and the European way of life, many expats have chosen to move and settle here. Gorlero’s palm-tree-lined 11 blocks features a wide range of banks, boutiques, movie theaters, casinos, music stores, exchange bureaus, and restaurants. It is a popular spot for teenagers and nightlife-lovers of every age and inclination.

The famous craft market, located in Plaza Artigas in the center of the peninsula, accommodates more than 200 stands that sell everything from simple souvenirs and woolen or leather clothes, to jewelry and semi-precious stones. The anticipatory atmosphere as workers set up the market the previous night is not to be missed, as painters and caricaturists display their work and bands play into the wee hours.

Each year, Punta del Este welcomes movie and TV celebrities, as well as businessmen, cultural representatives, and international politicians. In fact, during the high season, this South American tourism resort comes to resemble a playground for the worldwide jet set.

The great attraction of this city is the broad range of choice it offers visitors. Choose from simple inns to deluxe international hotel chains; local family-style dining to gourmet international cuisine; international theater to jazz festivals; and major sport competitions, such as tennis or polo. There is always something to do in Punta del Este, day or night.