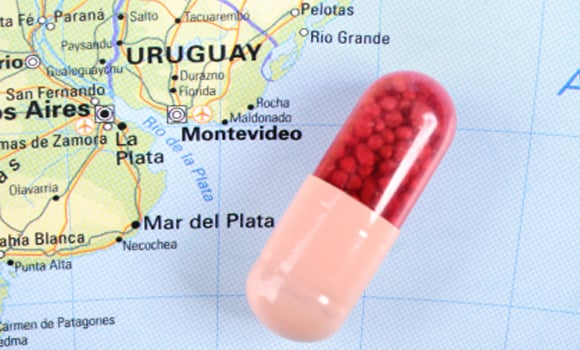 First-world healthcare standards are nothing new in Uruguay.

Most Uruguayans are descendants of European immigrants who brought their hospital traditions with them.

For example, the Spanish Hospital, Asociación Española, was started in Montevideo, Uruguay’s capital, in 1853.

Today, Uruguay offers a range of health plan alternatives, which includes private health insurance through companies such as BlueCross and BlueShield of Uruguay.

But what makes Uruguay stand out in the world of healthcare is an affordable private hospital membership plan called a mutualista.

To be clear, Uruguay is not a medical tourism destination. Buying medical services individually as a traveler in Uruguay can be quite expensive. (If you vacation in Uruguay, be sure to buy travel insurance.) The value, here, is in long-term healthcare plans available to locals and expats who make Uruguay home.

A mutualista works like this: An individual applies to become a member of a private hospital’s plan.

Once accepted, the hospital provides the member with healthcare—everything from routine doctor visits to emergency room care and major surgery. In exchange, the member pays the hospital a monthly membership fee and makes a small co-payment when he or she uses the hospital’s services.

Unlike health insurance, a mutualista has no big deductible, no lifetime cap, and no tricky terms.

Mutualistas usually include discounts on medications. They typically don’t cover optometry, non-emergency dental work, and visits to a psychologist.

The monthly membership fee for a mutualista is often less than $60 per month.

Hospitals that offer mutualistas are private companies. Each sets its own standard in regard to age limits and pre-existing conditions for non-employed members. Some apply more scrutiny to new-member applicants over 60 or 65.

More than 165 years since its inception, the Spanish Hospital, Asociación Española, is still going strong. Today, it’s the largest mutualista in Uruguay and said to possess the best medical equipment in the country. It’s located in Montevideo, with more than 20 satellite clinics, including one in the beach resort town Punta del Este.

The majority of expats I know in Montevideo are members with Asociación Española. Many came to Uruguay as retirees and got accepted as new members in their 60s. I hear many good reports about effective treatment and life-saving medical interventions at Asociación Española.

The British Hospital is known for its pleasant well-organized surroundings, shorter waiting times, and high level of personal attention.

It offers its own premium hospital plan at its two locations in Montevideo called the “Hospital Scheme”.  Plan options include a private room if you’re hospitalized and international travel insurance.

Rates at the British Hospital vary depending on your age and when you become a member, but often run in the neighborhood of $300 to $400 per month.

The British Hospital is stricter than most in regard to age and pre-existing conditions of new members. It will sometimes consider new members over 60 for an additional up-front fee.

I’ve been a member of the British Hospital for more than 10 years. When I first moved to Uruguay, getting a healthcare plan was just one of the details of making a move. Now, after two emergency room visits, a number of tests, and a surgery, my hospital plan is one of the things I am most grateful for living in Uruguay.

You will find ASSE Hospitals in cities throughout Uruguay, with polyclinics and hospital auxiliaries in most small towns.

You can use ASSE like a mutualista: making a regular monthly payment (usually less than $60, the same as a mutualista) in exchange for all your healthcare. However, with ASSE, you won’t encounter restrictions for age or pre-existing condition.

In Montevideo, service standards at ASSE hospitals are generally lower than the mutualista programs at private hospitals. The exception is the university hospital (accessible through ASSE), where you find some of Uruguay’s top medical specialists.

One Montevideo expat, who came to Uruguay in his early 70s is a member of ASSE. He had a close call that landed him in the university hospital for more than a week. While the physical surroundings were a little lackluster, the medical treatment and follow-up he received was top notch.

Outside Montevideo, where ASSE hospitals often have a better service reputation, you find more expats using the public option.

In order to use the public healthcare system, you need a cédula (Uruguayan ID card), which you receive when you start the legal process to become a resident of Uruguay.

Some expats in Uruguay purchase an additional private mobile-emergency-care plan. It’s a
service that will dispatch an ambulance with a doctor to you 24 hours per day, seven days per
week.
A mobile medical assistance plan costs between $20 and $36 per month. Popular emergency
services include SUAT, UCM, and Española Móvil.

Uruguay is a Spanish speaking country. And at most hospitals, you cannot expect to receive service in English.

At Asociación Española appointments are made online instead of by phone, which can be difficult for a non-Spanish-speaker to navigate. One expat couple I know who speak just a little Spanish, visit their local Española clinic in person to make appointments.

They get by with their doctor who speaks a little English. A few people in the clinic’s administration department who speak English can be called on to translate if need be.

Another solution is to use the services of a translator or call upon a bilingual friend to help out as you gradually develop your Spanish language skills.