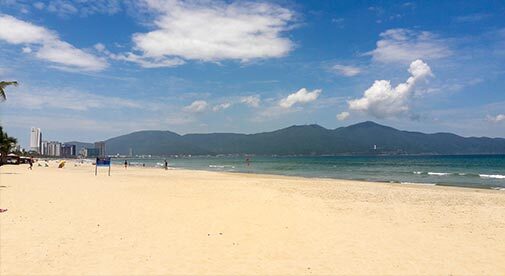 Da Nang combines all the amenities and atmosphere of a city with the fun of the beach. ©Sharyn Nilsen/International Living

Tony (“Hilly”) Hill, 54, moved to Da Nang in 2010. It wasn’t his first time living abroad—he’d been away from his hometown of Echuca, in the Australian state of Victoria, for six years working as an insurance broker in hectic Hong Kong before he discovered this dynamic city on Vietnam’s central coast.

It was a place where I could start over again.

He first came here for a month’s stay, working as a volunteer, “There was something magical about Da Nang,” he says. “It took me a couple of years to make the move, but I’m so glad I did. There was so much opportunity and potential here, and I was drawn to the laidback lifestyle and the beautiful beaches. I felt like this was a place where I could start over again.”

Today, Hilly’s Bakery is a successful and well-regarded Da Nang business. He sells meat pies and homemade breads, English muffins, brownies, and other baked goods to restaurants and individuals throughout the city. “My very first job was working as a cook in the Australian Navy. I eventually worked in the IT section of a company, which got me out of the kitchen. But I always felt like there were more opportunities in the hospitality industry, and I knew that sometime I’d have a business like this,” he says.

The business started small. “A friend of mine had a bar and asked me to make some meat pies for him. I leased a small kitchen so that I could do what he needed. The word got out, and I started selling pies to other people as well. Then, people wanted sandwiches, but I didn’t like the quality of bread that I was buying, so I started making bread. When people heard about how good my bread was, those sales increased, and so did the meat pie business.”

Hilly met his wife, Hien, while the business was still new, and she’s been a big help in working with suppliers and dealing with the red tape. “We had to lease a larger kitchen, and we grew out of that space in three months, then moved again to our current place. We’ve grown as the needs have changed, and it’s been very successful for us. Since we don’t market to the tourist audience, we don’t need to be on a major road to survive.”

Hilly is the sole proprietor of his bakery, and he says that it wasn’t difficult to get the proper licensing. “If all the paperwork is in order, the Da Nang government is very helpful. I had to show that I had investment capital, and they could see that there was room for growth and employment, and that I could train and hire local Vietnamese staff,” he says.

“Currently, 20% to 25% of our business comes from Vietnamese clients. Many Vietnamese restaurants and coffee shops in town buy their baked goods from us, and they’re happy because they know their customers like it. Some months are crazy-busy—that’s good, and we enjoy it—but if it’s a quiet month, that’s fine too,” Hilly says.

At first, Hilly and Hien put in long hours. “You have to be prepared to sacrifice for the first couple of years, and there wasn’t a lot of free time at first. I’d be delivering in the midday sun or in the rainy season. Now that we’ve got a good customer base and really good staff, it’s not as taxing on our time. I still do deliveries on my motorbike, but it’s an opportunity to visit my customers and get out of the kitchen. Now, I work two or three hours a day, and if I want to go somewhere, I can just close the place for a day or two. I feel like we’re on holiday most of the time,” he says.

When he’s not baking or making deliveries, Hilly says that he enjoys taking afternoon swims and going for rides on his motorbike. “I like going to the beachside places, and I’m just a few minutes’ walk from one. I also enjoy playing golf now and again,” he says.

Da Nang has a monsoonal tropical climate. The weather tends to be mild in the winter months and warm during the summer. “The weather was a factor in my moving here, but it was the beaches that attracted me,” he says. “In Da Nang, even when it’s raining, it’s still a mild day. Now, it only feels cold if I’m on the motorbike. I’ve never felt that I needed to put in a heater.”

When they go out for dinner, Hilly says there’s plenty of choice in Da Nang. “We tend to go to local Vietnamese restaurants. We both like banh xeo (a fried rice-flour crepe filled with bean sprouts and shrimp, squid, or pork). If there’s a new restaurant, we like to go try it out—and we’re surrounded by steak and seafood.”

Hilly says that he’s pleased with how things have turned out. “I’d suggest someone live here for a couple of years and see how things work first; don’t expect to come here and get rich quick because it doesn’t work that way—not here or anywhere. If you start up small, then there’s always room for growth,” he says.