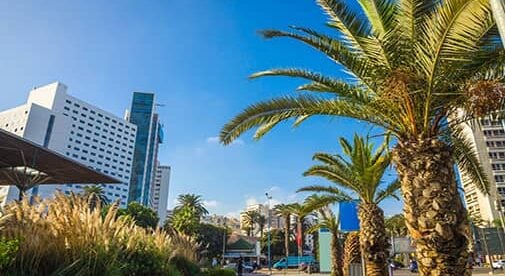 Casablanca is home to miles of ocean coastline and its busy shores serve as Morocco’s principal port. ©iStock/Olena_Z

The last stop on our journey through Morocco was Casablanca. Beverley and I arrived by train from Marrakech, eager to compare Casablanca’s modern reality to that romantic black-and-white version so many people still imagine of it.

After a brief shopping excursion through the narrow and crooked alleys of Casablanca’s old and new Medina districts (which are much younger—dating only to the 1800s, and substantially smaller and less intimidating than those in Fez and Marrakech), we headed to the Hassan II Mosque—which, with its minaret thrusting 689 feet high, is the city’s most prominent landmark. Atop the tower, a laser beam travels 18.6 miles, pointing toward Mecca.

Reputedly (but arguably) the world’s second largest mosque next to Mecca—and the biggest in Africa— this elaborate building, completed in 1993, can host up to 105,000 followers (25,000 in the prayer hall and 80,000 outside). Unlike most mosques, access is provided to non-Muslims and tours are conducted in several languages.

Built according to beliefs expressed by the Quran, that God’s throne was built upon water, this colossal building was constructed on a promontory that protrudes into the Atlantic. Worshippers can watch the ocean waves crashing ashore through a glass floor in the lower level.

We admired the majestic architecture of this great hall of worship, and the dedicated workmanship that took a team of 6,000 master stonemasons and carpenters six years to complete. From its heated prayer floor to its gilded wooden ceilings—carved from cedar from the Middle Atlas Mountains—to its ornate marble floors, colorful terracotta tilework, and 45 lotus-shaped fountains in its underground ablution halls (where followers conduct ritual cleansings prior to worship), the entire structure presents as a masterful work of art. A 200-foot-high retractable roof allows sunlight to flood the hall during daytime hours and allows worshippers to pray under starry skies at night.

After our tour, Beverley and I strolled the ocean-view promenade leading from the mosque toward the city center, running alongside a busy ten-lane boulevard. We shared the path with joggers, bicyclists, scooters, and fishermen, as mighty whitecaps crashed against the rocks below us, and a cool ocean breeze gently swept through our hair. As we looked back at the world’s tallest minaret, with the expanse of the ocean beside us, we felt like, well…a hill of beans.

We ended our day at La Sqala, a garden restaurant situated on storied grounds concealing the 18th-century remnants of Casablanca’s portside fortifications. Unbeknownst to many diners, hidden behind the restaurant’s unassuming stone walls is a raised promenade that overlooks the Atlantic Ocean. Those with keen eyes can observe battle scars on these storied reddish-yellow stone walls – many attributed to enemy gunfire sustained during WWII. Although their open concept dining allows for stray cats to beg tableside, the restaurant offers great food and service, and otherwise comfortable dining, at very affordable prices. Chicken kabob plates are $6.50, with many beef and seafood options also available.

Although we planned to continue exploring Casablanca, as well as the nearby coastal community of Essaouira, a location beloved by many expats, before flying from Casablanca to Lisbon to return home for a Christmas sojourn, our plans were scuttled. Morocco’s King acted swiftly upon learning of the Omicron variant and ordered all air traffic to be suspended for an indefinite time. Beverley and I were forced to end our journey ahead of schedule to take the last plane out of Morocco, lest risk abandoning the rest of our travel itinerary.

We look forward to returning to Morocco one day soon to continue our journey. Because if we don’t, I know we’ll surely regret it.

IS MOROCCO THE RETIREMENT DESTINATION FOR US?

Beverley and I were slightly unnerved as we first set foot in Morocco. Dropped at the edge of Fez’s Medina, it felt like we’d parachuted straight into an action-packed Indiana Jones sequence. But while the culture seemed vastly different at first, its mystique and charm quickly grew on us. By the time we left Morocco, the chaos had morphed into a tuxedo-and-evening-gown scene from a classic Bogart flick. That’s the dynamic nature of this country—and that really appeals to us.

We loved the low cost of living, with amazing value for housing, food, medications, and other essentials. In Morocco, you’ll feast on a smorgasbord of food on a linen-covered table, by candlelight, for less than the cost of cooking your own meal in North America. And homes cost less than what most people fork out for a new car back home.

People in Morocco are gracious, kind, and accepting. They’ve got a laid-back attitude with respect and tolerance for other cultures. “Americans and Canadians walk on water here,” our U.S. expat friend, Karl Mangialardi, enthused. “There’s no animosity between our cultures whatsoever.”

We found it easy making friends, with many locals fluent in English or French (my Canadian high school classes paid off!), and the climate’s as diverse as its landscape. From its majestic snow-peaked mountains to its hot desert sands, lush cedar forests, and miles of serene, palm-fringed Atlantic coastline, Morocco covers the gamut. You can hop aboard the country’s high-speed train in the morning and ride a camel into the desert that evening. Or hop a ferry and visit Spain or Gibraltar for the day.

Morocco’s cosmopolitan cities, many with European influences, and the modern amenities available to expats were a pleasant surprise. The infrastructure of many of the “New Cities,” where most expats live, reminded us of a cleaner Toronto or Chicago with more botanical gardens and green parklands. Although many of the municipal buses seemed poorly maintained and crowded, intercity buses and the rail system had higher standards.

Morocco’s food is heavenly, once you get past sheep and camel heads and boiled snails. Their mint tea, tajine, fresh BBQ chicken, moist but flaky couscous, the melt-in-your-mouth goodness of their maakouda balls, and homemade pastry “bricks” are simply to die for.

Morocco has private hospitals and clinics available to those with insurance plans. Overall, its healthcare system has improved significantly over the past 20 years, with most expats pleased with the services received.

Still, Morocco isn’t without its challenges.

Roads and traffic are chaos. With few streetlights or crosswalks, it can be very dangerous for non-vigilant pedestrians. With taxis so cheap, I wouldn’t even hazard to drive here.

Dealing with pushy touts (unofficial guides) in tourist areas gets annoying. For our expat friend, Karl, it took a couple of years to finally be recognized as a local. “They can smell new blood from a mile away…and tourist scams are plentiful,” he says.

The water is non-potable, but bottled water is readily available at very affordable prices. Outside of developed areas, pit toilets are commonplace, and soap and toilet paper are rarely provided. Services can become quite rustic.

As a developing nation with economic challenges, it’s best suited for those bringing their own money, pension, or income sources.

For us, however, Morocco’s a contender. Ticking most of our boxes, it’s earned a well-deserved spot on the short list for our retirement paradise.

␣
David Gibb is a retired private detective exploring Europe and Latin America with his wife, Beverly. Together, they set off in search of a personal retirement paradise where they can live, as the saying goes, happily ever after. They’ve toured Portugal, Spain, the English-speaking enclave of Gibraltar, and crossed the Mediterranean to Morocco. Check out his other articles below:

Next up, he’s heading back across the Atlantic to investigate retirement havens in Mexico, Guatemala, and Belize. Look out for his latest updates at: Gumshoe in Paradise.