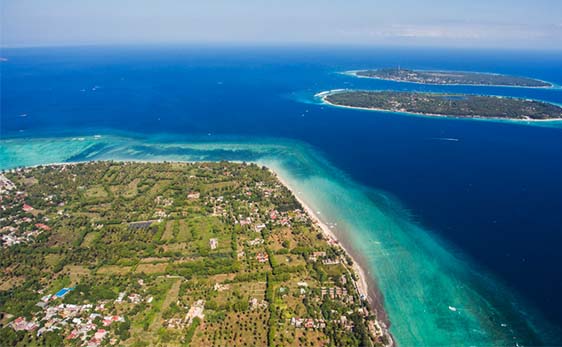 Gili literally translates to “small islands” in the traditional Sasak language of Indonesia, and you’ll find many ‘gilis’ all over. In fact, there are over 17,000 of them.

When you hear people referring to “The Gilis” though, you’ll find they’re meaning the three islands located off the north-west tip of Lombok Island—known as Gili Trawangan, Gili Air, and Gili Meno. The islands are one of the most popular destinations within Indonesia, but not so long ago they were semi-deserted, a place where only occasional travelers would visit. Only in 2008 were ATM’s introduced to the area and electricity was only introduced in 1994. Development is creeping in now however, fortunately in a tasteful way that still keeps intact the laidback lifestyle and a simple life.

The islands are a popular destination for many tourists from all over the world, with the calm turquoise waters and white sandy beaches fringed with palm trees, the most serene you’ll find across Indonesia.

How to get to the Gili Islands

Travelling to the Gilis is relatively easy from Lombok or Bali.

From Padang Bai in Bali, take one of the many fast boats available and you’ll be disembarking on Gili Trawangan within three hours.

The alternative is a short flight from Denpasar airport to Lombok airport. The 50-minute journey lands in the town of Praya, located in the central part of Lombok, from there the transfer via car and fast-boat will take you just under two hours.

Island hopping between the three islands is easy, with many of the large tour operators scheduling smaller boats throughout the day.

Retire in the Gili Islands, Indonesia

There’s a small expat community living on the Gili Islands and most of those are running a business. The islands are famous for diving and snorkeling activities and there are many hotels and homestays available.

Life on the islands is relaxed. The local people are mostly of Muslim faith and you’ll hear the call to prayer regularly from the mosques, which are scattered all over the three islands, but there’s also a diverse population of many cultures. The locals have big smiles and are most welcoming; they’ll happily sit and discuss their daily life. Housing is budget style, with only a few upscale hotels on the islands. People settle on the Gili islands to slow down and enjoy life.

Cost of Living in the Gili Islands, Indonesia

The majority of accommodation offered to expats are homestays and can be negotiated at a reasonable price for longer stays. Basic accommodation, with one-bedroom, simple kitchen and bathroom, will start from $260 per month. The more upmarket places, two to three bedrooms, western style kitchen and bathroom, are around $600 per month. Internet access is available on all the islands, but WiFi options can be limited. The best way is to use an Indonesian sim card and pay around $10 to $15 a month for data on your mobile phone. There are small local stores dotted around the islands, but most homestays are able to supply you with staples like gas and water.

You’ll find a few larger hotels with more upmarket menus, but mostly there are beachside warungs serving a mix of local and western fare, dining is definitely casual. Feet in the sand while you listen to the waves lapping at the shore. Most meals will cost around $3 to $7 depending on your choice, with a bottle of beer costing around $2.50. As typical across Indonesia, wine is the most expensive part of a meal, around $7 to $10 a glass or $30 for a bottle for local wines, and more for the imported brands.

Tipping is a matter of choice across Indonesia. You may wish to leave a tip if your service was great, but be aware some places already include a 15% tax and service charge.

Lifestyle in the Gili Islands, Indonesia

The island’s weather is tropical and balmy all year round. The wet season ranges from November through to January and it’s overcast with intermittent downpours over this time. During dry season, expect clear skies and temperatures hovering around 86 F to 95 F on most days.

The Gilis are one of the few places in the world where you will not find motorized transport. No power-driven transport means the only ways to travel are to walk, ride a bicycle, or take a ride in a horse drawn cart. It also means there’s no traffic noise, all you’ll hear is the clip-clopping sound of horses. The carts are known as ‘Cidomos’, and are used as taxis for tourists and also to carry goods from the harbor to stores, and whatever else the locals need carting around.

There are a few ATMs dotted around all of the islands and small cash withdrawals wouldn’t be a problem, but for anything large you may need to visit a bank on Lombok or Bali.

With such a diverse culture, there are a few local holidays to be aware of. Balinese special days include Nyepi Day, this day means the whole island will shut down for 24 hours and you must remain indoors for that time. Then of course there are the Muslim holy days of Ramadan and Idul Fitri (Eid al-Fitr).

English is widely spoken, but knowing a few Indonesian words will definitely be an advantage for you.

Things to do on Gili Islands, Indonesia

The islands are celebrated for the tropical waters which surround them, so it’s no surprise that snorkeling tops the list of things to do. Beneath the water you’ll find many varieties of fish and eels, but by far the standout are the majestic sea-turtles, so close you can touch them.

The highlight would be the sculptures you can find at the bottom of the sea. The project called “Nest”, was designed by Jason deCaires Taylor. Placed to act as an artificial reef, the underwater sculptures are located just off Gili Meno. They ensure that coral will grow, which ultimately results in more fish. At the same time, it attracts many people as it’s a great spot to snorkel, dive, and to take underwater photography.

On Gili T there’s also a turtle hatchery, with the hatchlings being released into the ocean regularly. You can even go horse-riding on the beach on Gili Trawangan, with a cost of around $25.

Take it one step further and get your scuba diving license. The Gilis are a hot diving spot, and there are quite a few diving companies that can assist you in gaining your PADI qualification. The visibility in the waters is very clear almost all seasons, making it the perfect spot to explore the colorful reefs. Diving tours are easily organized at a starting cost of $50.

The Gili Meno Lake is situated in the center of Meno Island, it’s a saltwater lake with a mangrove forest attached. It’s a great spot for a peaceful walk, or lay back with a good book in one of the huts that sit on the lake’s edge.

With no cars to drive, riding a bike around any of the islands is a great experience, you can rent a bicycle for $3.50 per day, or even cheaper if you go long term. Beach-hop the islands with many places along the way to stop for food or a cold drink— really, it’s the best way to discover hidden spots on all of the islands.

For the surfers, Gili Air has its own surf break, known as “Playgili”, but it can be treacherous as the waves run over the coral reef and rocks. Not far away are the famous surf breaks on the bigger island of Lombok.

After you’ve done all of the above, at the end of the day, head to a western facing beach and catch one of the most amazing sunsets you’ll ever see. Alternatively, sit on the shores of Trawangan at sunrise and the mountainous ranges of Lombok are directly before you, with the towering Mount Rinjani, an active volcano, rising through the center. As the people of Gilis and the people of Lombok are primarily Muslim, the call to prayer wakes you just before dawn.

Which Gili Island is for you?

Gili Air is the smallest island with a circumference of only 3 miles, and is known for being the most peaceful and relaxing. Back in the ‘80s this was every backpacker’s destination. It’s the closest to Lombok’s mainland and is also probably the most underdeveloped of the three. A lot of people prefer the local atmosphere still very visible and the opportunity to be a part of a close-knit community.

Gili Meno is for the adventurous with easy access to the many boats that go scuba diving or you can walk straight off the beach and be snorkeling amongst the sea turtles in the crystal-clear waters.

Gili Trawangan is the place to be if you want the nightlife. The many bars offer live entertainment most nights and on the main beach you’ll find the nightly food market where locals and expats meet.

Any of the Gili Islands give you the opportunity to escape the hustle and bustle of the outside world, and all are easily accessible no matter which one you choose. Island hopping can be done easily and from as little as $3.50 for a ride on the local boats.

Get Your Free Indonesia Report Here

Simply provide your email below to receive this Free report. You’ll also receive a free subscription to our International Living Postcards – a daily e-letter that explores living, traveling and investing in South East Asia and other exciting countries from around the world.