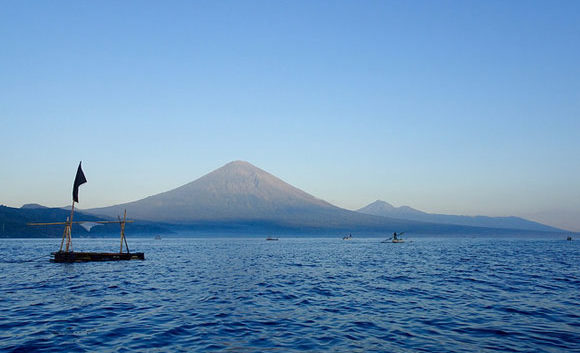 The mere mention of Bali evokes thoughts of paradise, but it’s more than just a place. There is a spiritual energy surrounding the island that you feel as soon as you step off the plane. You’ll notice offerings to their gods everywhere, and temple processions, where you’ll witness groups of elegantly dressed people walking by, bearing what appears to be skyscrapers of food balanced on their head. And for less-spiritual seekers, this steamy Indonesian island also has wonderful surfing and diving, great resorts, and a nightlife that has become famous across Southeast Asia.

Aside from a large expat community creating a welcoming atmosphere, moving to Bali is a smooth and easy changeover. Unless you opt for more off-track areas like the West coast, you won’t feel like you’re in a wildly foreign land. There’s no real culture shock, Bali has most, if not all, of the amenities you’d find at home. Plus, because it has been a tourist destination since the 70s, most people speak English, making everyday life a breeze.

Bali’s climate is hot and tropical year-round. The average temperatures hover around 80 F, with high humidity during the wet season, from October to April. The dry season, May to September, has the lowest humidity. The mountainous region through the center of the island is cooler year-round.

There are various hospitals throughout the island. When in need, most expats stick to the private hospitals as the quality of care and attention to detail are generally more in line with Western standards. The two best private hospitals on the island are BIMC and Siloam, both located in Kuta. For minor ailments and injuries, there are local doctors and clinics in every town.

There is only one international airport in Bali, Ngurah Rai International Airport, in Denpasar. There are no direct flights from the U.S., but flights with just one stopover can be found starting at $450.

This is the shopping mecca of the island. Whether you’re looking for crafts, art, homewares, or clothing, you won’t be disappointed in the variety and artistry of it all. It is also a fabulous international food destination so after working up an appetite from all the shopping or a day at the beach, you can indulge in any type of cuisine you desire.

Situated in the southern portion of the island called the Bukit Peninsula, Uluwatu is a surfer’s paradise.  Here the rugged coastline gives way to the blue seas and the big waves of the Indian Ocean.

Sitting on the southeast coast of the island, Sanur has a reputation for being sleepy, with most of its bars and restaurants closing at midnight. But Sanur is far from boring. It’s small enough to get to most places on a bicycle but big enough to keep you entertained. There’s a narrow boardwalk that runs almost the entire length of the beach filled with various locations to dine from inexpensive local restaurants, or warungs, to fine dining.

On the northern coast, Lovina is probably one of the least expensive places to live on the island. With calm waters, home to pods of dolphins, this is not for the surfing enthusiasts, but perfect for divers and snorkelers. It’s a low-key place to catch up on life, with nearby attractions like temples, waterfalls, and hot springs.

An epicenter of the arts as well as the place for anything holistic and mystical, Ubud is often referred to as the heart of Bali. It’s where you can attend yoga retreats, go vegan, and capture your inner designer at a jewelry-making class. It is surrounded by rice paddies, with the nearest beach only 30 minutes away.