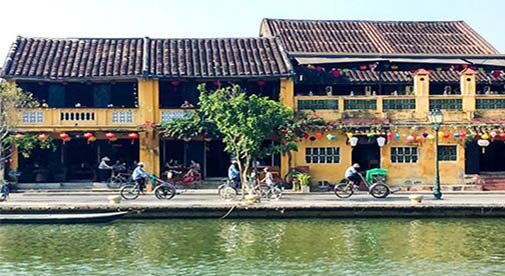 Waterside restaurants and homes typify the scene in the warm city of Hoi An. ©Victoria Harmer/International Living.

When Pascal Rousseau’s friends visited him in Hoi An during his frequent long-term stays, he often played “tour guide.” He showed them the Vietnam he loved most, leading them on cycling tours through the lush, rural areas outside of town.

Pascal fell in love not only with Hoi An’s warm weather and beautiful scenery, but with the Vietnamese people. “They have a genuine warmth,” he says, “especially the people in the countryside.” He spent much of his time in the country riding his bicycle through rice fields and farmland, getting to know the people who lived there.

He never thought of bicycling as more than a hobby, until one day he returned from guiding his friends and one of them said to him, “Pascal, I think you should open your own bicycle tour business in Hoi An.”

The idea was well-timed, as Pascal was planning a permanent move from France to Vietnam for an economically active early retirement at the age of 47. “Before I left France I had a few ideas for what to do,” he says, “but the bicycle tour business definitely became my number one!”

Pascal returned to Hoi An and opened Heaven & Earth Bicycle Tours. Purchasing bicycles and choosing a tour route was easy—reaching the tourists that would be his customers was not. “The most challenging part of this business, I think, was getting the local support from hotels and homestays. They didn’t understand why I wanted to do this kind of tour.”

The Vietnamese business owners he talked to all had the same doubts. “Why do you want to ride a bicycle? Everyone likes to ride motorbikes. People don’t enjoy being out in the hot sun. And you will go to the countryside? It’s so boring! Nobody will want to go on your tours.”

“There were times when I got discouraged,” Pascal says. But then he would remember how much he enjoyed cycling through the rural landscape. And if he liked it, then he was sure other people would like it too.

Finally, a few open-minded businesses agreed to promote his tours. “I think that they really didn’t believe that I had a good business. But they were willing to take a chance and see how things went,” he says. He still remembers his first customer “He was a German guy, very friendly. I told him that this was a new tour, the first ever! So, if he had any suggestions, I would be happy to hear them,” he recalls.

Things went so well for Pascal that it wasn’t long before others in Hoi An started copying his idea, offering their own bicycle tours. Local hotels and homestays that had turned him away were now approaching him, asking for ways to promote his tours to their guests.

“When I first started there was very little tourism in Hoi An. Today it is very different,” he says. “My business grew a lot. Of course, there are still challenges every day. But that is what I like most about being a business owner—there is always something new and something different happening.”

Pascal’s typical day starts at the shop around 8 a.m. He checks that everything is ready for the day’s tours and prepares the bikes. Some days he trains his staff, and others he takes care of office work.

Pascal’s favorite kind of day is when he heads out on his own to scout new routes for his tours. “I feel like this is not work,” he says, “this is more just enjoying what I do.” After all, it was cycling through the countryside, meeting the people who live and work there, that drew him to Hoi An in the first place.

And it doesn’t hurt that the cost of living in Vietnam is much lower than in his home country. Renting a large house with a garden, patio, and a balcony costs between $500 and $800 per month. “Local food is incredibly cheap, maybe $2 to $3 for a Vietnamese meal. Of course, if you want to eat an imported steak every night then you will pay more for that,” he says.

Pascal’s advice is to buy local; beer can cost less than $1 and Vietnamese iced coffee only $1.50 (and often comes with a stunning view of either the river or the streets of Hoi An’s historic Old Town).

For those interested in living in Vietnam and starting their own business, Pascal has some recommendations. “Come to Vietnam for maybe two to three months so you can find out if you really like it here. If you only come for a week and the weather is good, you will be very surprised when the monsoon season comes,” he says with a laugh.

“And have an open mind. Vietnam is very different from the U.S., from Canada, from France. If you can accept this and adapt, then you will like living here.”

Would he go back and do anything differently? “No, I don’t think so,” he says. “Everything in my life has led me here to this place. Good things and bad things, they are all a part of everything.”

He pauses for a moment. “Well, I guess there is one thing I would do,” he admits. “I would learn to speak Vietnamese a lot sooner!”

Video: Why I Moved to Vietnam