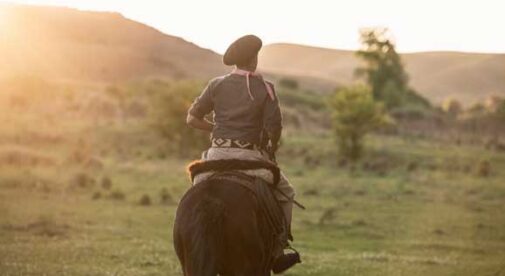 The South American Pampas is a grassland plain that covers all of Uruguay and adjoining portions of Argentina and Southern Brazil.

In the 16th century, the Pampas was controlled by the Spanish, who introduced free-roaming cattle, which proliferated. By the early 18th century, livestock from the Pampas became a significant income source for the Spanish-controlled government.

To prevent market competition, the Spanish made it illegal for anyone else to trade in cattle. But despite the prohibition, a society of individuals formed on the Pampas, which lived off the region’s abundant herds. They became known as “gauchos”, which comes from the Quechua expression “huachu”, which means orphan or wanderer.

The early gauchos included a mix of European and indigenous people. From the Spanish, they took the horse and the guitar. From the indigenous, they took the bolas (a weighted throwing cord used to capture cattle) and the practice of drinking yerba mate. (Yerba mate is a tea-like infusion made from a local herb that is still popular today.)

The gauchos became skilled at taming wild horses, handling a knife, and using the bolas. They refined the culinary art of cooking beef over wood coals. They tanned hides into leather and made saddles, boots, hats, flasks, beds, and temporary shelters. For anything else they needed, they traded hides.

It was a free and independent lifestyle. And many of the Spanish soldiers sent to stop the gauchos ended up joining them.

Hundreds of years later, the legacy of the gaucho lives on. What is called a gaucho today includes country people who retain parts of the gaucho skill set.

Shortly after moving to Uruguay, I saw gauchos from the distance, moving cattle in the countryside; and at country-fair rodeos. But it was several months before I met my first gaucho in Uruguay.

At the time, I lived in the beach resort town of Punta del Este. A Uruguayan friend, Martín, who also lived in Punta del Este, invited me to join his family at their weekend hobby farm 20 miles north of town.

While there, the farm’s caretaker, an elderly man, came to the farmhouse door to discuss a work matter. Martín invited him in to meet me, and translated for us as we learned a little about each other. The farm caretaker was the real deal. A man who’d worked in the country his whole life.

A short time later, the caretaker returned to the farmhouse, bringing his horse tack to show me. The saddle, bridle, and the crop had been passed from his grandfather, a gaucho, to his father, also a gaucho. And his father passed it down to him.

The leatherwork included impressive patterns. And the metal parts, also decorative, were made from silver and gold. He was really proud of it.

Martín explained that the only thing many gauchos ever owned was their horse. So adding silver and gold to their tack was a way to store wealth.

After dark, we went out on the porch. It was absolutely quiet—no background noise from distant roads or airplanes. And the sky shone bright with thick clusters of stars like you only see in truly rural areas and from boats out at sea. It was a day and evening to remember.

About a month-and-a-half later, I met Martín for a coffee in Punta del Este. During our conversation, I learned he was going back and forth to the farm after work to take care of the chores while his caretaker was on vacation.

“Where did he go for vacation?” I asked.

“He went to Tacuarembó for the Fiesta de la Patria Gaucha”, Martín replied.

Martín explained that every March the city of Tacuarembó hosts a large country festival to celebrate Uruguay’s gaucho heritage. It includes a horse parade, a rodeo, and all sorts of contests and exhibitions of gaucho skills. In the evening are traditional gaucho barbecues followed by gaucho music and dancing.

He went on to explain that the event attracts 10s of thousands of visitors. The attendees include people from all over Uruguay, as well as parts of Argentina and Brazil.

“How is he getting there,” I asked? (I knew Tacuarembó was far away. I looked it up later and learned it was about 460 kilometers, 285 miles, from Martín’s farm.)

I pictured the old man on his horse riding across the Uruguayan prairie. “But isn’t that a long way to go on a horse? Wouldn’t it be better to drive?” I said.

“Does he have extra money for an emergency?” I continued.

Martín told me not to worry. “He knows the country and country people. Now, if he left in a car with a surplus of money, I would be worried. He would probably get in plenty of trouble then. But he will be fine on his horse.”

So if you’re driving through the Uruguay countryside in March. And you see an older man on horseback riding in the direction of Tacuarembó—with glints of sun coming from his saddle. There’s a good chance he’s a pilgrim on his way to the Fiesta de la Patria Gaucha to celebrate his gaucho heritage.