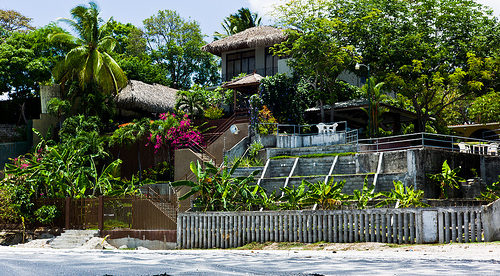 Terry and Sherry’s move to Florida saved them $800,000 in state income taxes alone…and protected their favorable tax status for a future move to Panama.

Many people are surprised to learn that one of their biggest tax-planning decisions when it comes to living overseas has to do with where they live before they go.

It’s one of the most overlooked aspects of tax planning. Put simply, there are states that are “no-income tax” states. If you move overseas from one of these, then you’ll pay no state income tax.

At a recent International Living conference I was talking with a couple from California. In the 1990s, Terry and a friend had started a tech company in California. Together, they survived the tech bust and developed a strong IT service. Now they were ready to sell, having received more than one multi-million-dollar offer. Terry had several good ﬁnancial advisors on his team, but he wanted an outside perspective.

Was he missing anything? As I ﬂipped through the huge ﬁle Terry handed me, I asked him what he planned to do once he sold the company. He and his wife Sherry had long ago decided that they wanted to move to Panama. The year-round warm weather, the low cost of living, and the strong Internet infrastructure appealed to Terry.

For Sherry, the big draws were world-class medical care and the cosmopolitan experience of Panama City. With the sale of the company at hand, they were excited that they could now make this a reality sooner rather than later.

Terry explained the various ﬁnancial scenarios proposed and told me that what he really wanted was to reduce his taxes. With a possible $8 million payout from the sale due to him, I could see why this was a priority. So I told Terry about a way he could save nearly $800,000…a move he needed to make before the sale of the business and any move overseas.

Your state income-tax situation can make a huge difference in your liability. Not just on the sale of your business, but for future taxation once you move abroad. And it doesn’t matter if your income is $8 million or $80,000…you can save signiﬁcantly.

Of course, it takes more partial-year resident income-tax return to end your residency in a state. You also need to establish a domicile in another one—ideally, a “no-income tax” state. Establishing domicile in another state is subjective in that the state from which you leave determines whether you left that state permanently or temporarily.

The only way to credibly do this permanently is to leave a paper trail. Terry and Sherry acted on my advice, and within 30 days had a paper trail to document their move to Florida, a no-income-tax state. They changed their driver’s licenses and voter registrations, signed a lease on a condo, enrolled their children in Floridian schools, and created new wills and trusts in Florida.

They closed all their business and personal accounts in California and kept copies of the termination letters and account statements. They kept a folder of their plans, timelines, and receipts of each and every change. If California were ever to question their Florida residency, they would have documented proof of their intention to permanently leave California.

If Florida doesn’t appeal to you, there are eight other states in the U.S. to consider that are no-income-tax states: Alaska, Nevada, New Hampshire, South Dakota, Tennessee, Texas, Washington and Wyoming. For Terry and Sherry, their big move to Florida saved them $800,000 in state income taxes alone…and protected their favorable tax status for a future move to Panama.

So you need to make a plan. You need to establish a new, permanent, and credible domicile from which to leave the U.S. Establishing a credible history of new-state domicile is generally something that takes about six months to complete and should encompass voting in your new state and filing a partial-year return with your former state before you leave the country.

Learn more about overseas retirement in countries around the world in IL’s daily postcard e-letter. Sign up for these free daily postcards in the box below and receive a Free Report on the World’s Top 10 Retirement Havens. (We value your privacy. You can unsubscribe at any time.)