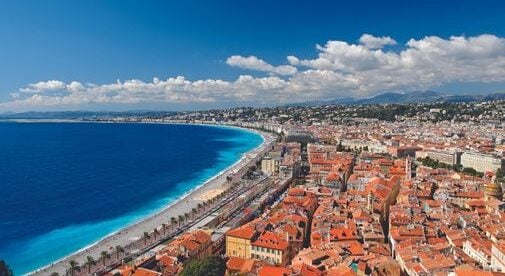 Beach and city lovers get the best of both worlds in Nice, a French Riviera gem. ©iStock/Elmvilla

Sometimes a place just sticks with you. It has a way of getting into your heart and soul and refuses to let you go. France was that kind of place for Patty Sadauskas.

A former CEO and director of credit unions in Kansas City and St. Louis, Patty, like many others before her, fell in love with France while visiting the country.

She took several trips there in the late 90’s and says that she always felt very welcome on her travels. On one trip in particular—at the tail end of a two-week vacation which had kicked off in Venice, Italy—Patty had a memorable experience while checking into one of her favorite Parisian hotels. “When I arrived,” recalls Patty, “the woman at the desk said to me: ‘You are home now.’”

That experience stuck with her and turned out to be a recurring theme—a feeling of belonging that would eventually propel her to make the move abroad. An International Living reader at the time, she began poring over articles and guides for moving to France.

The year was 2000, and Patty had interesting work opportunities coming her way, so she decided to focus on her career. She rode out the housing crisis of 2008 and was eventually able to sell her house and finally moved to Paris in 2015, at the age of 57, on what she called a “career break.” She’s never looked back.

Along with a welcoming expat community, Patty locked in an exceptional rental situation in the City of Light. Her furnished, one-bedroom apartment, ideally situated in the heart of the city, belonged to an American couple who visited Paris for two months each year. In exchange for a sizable discount on the rent, Patty would seek other accommodation during the time the owners were in Paris.

“It was a fabulous deal,” says Patty, and for those two months each year, she realized that she could be basically anywhere she wanted in France. Having already traveled extensively throughout the country, she began to live part-time in the sunny south.

Looking for a city around three hours from Paris, with easy transportation access, Nîmes—located in the Gard department—scored top marks as one of the only southern cities with a TGV (highspeed train) station in the center of town.

With an average of 300 sunny days a year, along with a dynamic art and cultural scene, Patty loved the city and found it quite easy to move around the historic center. Having spent the better part of COVID surrounded by the city’s wellpreserved Roman ruins but with few social opportunities, Patty admits that, like many others, the pandemic changed her perspectives.

“After lockdown, all I wanted to do was go to the water,” Patty says. She set her sights on the gem of the French Riviera, culturally rich and expat-friendly Nice.

Renting an apartment near the Mediterranean Sea agrees with Patty, as her eyes light up the minute she talks about her life in the south of France. Even when pressed, she struggles to find any drawbacks of her adopted home.

Although she admits initially coming for practical purposes, after just a short while, she was totally enamored with Nice.

“It’s just so easy to live here. You don’t need a car,” she says, “and Nice has an international airport with non-stop flights to JFK and Newark. The other thing that’s amazing about the airport is that I’m going to Venice next week for the third time in a year…which sounds crazy. The flights are cheap and it’s only an hour away.”

As she did in Paris, Patty prefers to take the bus for her travels around the city. She also uses the bus network to take day trips along the French Riviera. She often times her visits to coincide with the weekly farmer’s markets in beautiful seaside towns like Villefranche-sur-Mer and Cap Ferrat.

When asked what kind of advice she would give to anyone considering a move to France, she has a fast and ready answer: “Be patient and things will magically happen… and don’t forget to say ‘bonjour’!”

Guide to Nice, France: Retirement, Lifestyle and Cost of Living

7 Places You Should Visit in Provence Alpes Cote d’Azur