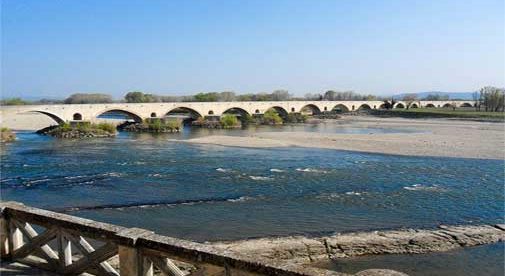 “I never tire of looking out my window, seeing the centuries-old buildings, and wondering about the people who lived here before us,” says Holly Kurzman, who moved from San Francisco to Pézenas six years ago.

Holly and her late husband Chris had long contemplated moving to Europe, but began seriously eyeing France shortly after Chris retired. “We were fed up with the rat race and cost of living in California—and the healthcare situation was dire,” Holly says. “I was self-employed and Chris had yet to reach the age where he qualified for Medicare. With pre-existing health issues…he was virtually uninsurable.”

They liked the idea of the South of France because of the low-key, relaxed lifestyle. “The French enjoy life and don’t kill themselves with work-related pressure,” Holly explains. “Meals are meant to be enjoyed and eaten with friends. In the U.S., at least in the places I’ve lived, everyone is career-driven. Here, people don’t push as hard, and take the time to enjoy life.”

Chris had lived in Aix-en-Provence as a young man, but the couple found they preferred the neighboring region of Languedoc-Roussillon. This area has all the warm weather, sunshine and beauty of Provence, “but is less crowded and much more affordable.” They chose Pézenas as their base while searching for a place to settle permanently. Soon they realized they liked Pézenas better than all the other towns they’d found.

“Pézenas is beautiful, especially the historic center. When my cousin came to visit, she said ‘It looks like a movie set.’”  Holly enthuses. “It’s got wonderful architecture—so much older and more interesting than what we were used to the in U.S. It’s also 20 minutes from the Mediterranean Sea, surrounded by beautiful countryside, and close to motorways.”

Upon deciding to settle in the town, Holly and Chris rented a two-bedroom apartment in a medieval building. “To reach my second-floor apartment, I walk up a spiraling stone staircase and pass under a couple of lovely arches and old ceiling beams. Inside the apartment, I have all the modern conveniences, so it’s the best of both worlds.” For this, she pays just $591 per month—the same amount she’s paid since she moved there in 2012.

The large Anglophone expat community of Pézenas and Languedoc has also been a boon to Holly…especially when she needed them most.

“We met a couple of people shortly after we moved here and through them we met others,” says Holly. “Then I learned about Ladies in Languedoc (LIL), an online group of local women. They really became my lifeline when my husband’s health declined. For instance, the first time he went to the hospital, a LIL member met us there in case I had trouble with the language. When he was in critical condition, another person volunteered to drive to Montpellier to pick up my stepdaughter from their airport, so I could be available if the hospital called me. I could give many more examples, but I think you get the picture.”

Sadly, Chris passed away from his illness, but Holly chose to remain in Pézenas. “I love it here,” she explains simply. “I have made so many friends that have been wonderfully supportive.”

For those considering moving to France, Holly has these words of advice: “Do your homework before you make your decision. Ask yourself why you want to move here and investigate whether moving will satisfy those wants and needs. Come with an open mind. Life here is not the same as ‘back home’ and you will experience at least a little culture shock. Try to learn the language, too—you’ll be glad you did.”