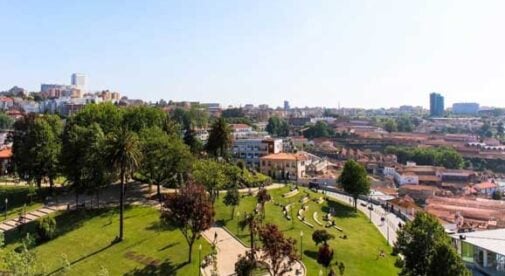 It was a cool winter day in the bustling city of Vila Nova de Gaia, just across the bridge from Porto, Portugal’s second largest metropolitan area.

New expats Debbie, 57, and David Billings, 70, were out eagerly exploring their newly adopted country. It had only been three months since they landed in Portugal to begin the next chapter of their lives.

The sun glistened off the windows of the large department store nearby while the sleek yellow and silver metro cars whizzed by. Pedestrians scurried along the busy plaza, some toting shopping bags while others lined up and waited for the next metro to arrive.

In the middle of the busy city street, David suddenly felt ill and told his wife that he needed to sit down. Debbie, a retired nurse, dialed 112 (the emergency number in the E.U.) for help, and described his symptoms to the English-speaking dispatcher.

By now, David was unresponsive, and a crowd had gathered to help. One woman pulled off her beautiful snow-white scarf and placed it under his head. A man raised David’s legs to help increase blood flow to his head, while another woman pulled out a stethoscope and listened to his chest. At least two other people called 112 and Debbie could hear them describing David’s symptoms in Portuguese.

“Within five minutes a bright yellow ambulance screeched to a halt,” Debbie explains. “The crowd moved out of the way and my husband was whisked off to the hospital.

“This would have never happened where I was from in the U.S. Who were these angels of mercy? These people just passing by who jumped in to help a stranger in need, a foreigner who just moved to their country?”

Upon arriving at the hospital, staff determined David had suffered an anaphylactic reaction. He was treated and kept overnight for observation and released the next day. Since David was treated in a public hospital, his overnight stay and ambulance ride were free.

“We moved to Portugal for affordable, high-quality healthcare and safety and this was evidence that we made the right decision,” Debbie says with a smile. “My wish is that someone that reads this knows one of those angels of mercy who came to our rescue and will pass on the message of how eternally grateful we are for all of their help.”

Like many Americans it was the high cost of healthcare after retirement that forced David and Debbie to look for options abroad. Portugal has excellent healthcare in both the public and private sector and as residents, the couple have access to both.

The cost to carry private health insurance with MGEN, a company that insures those of advanced age, is just €147 per month ($166) for the two of them.

“We love Portugal and the people,” concludes Debbie. “We know we made the right decision to move here.”

Overview of Healthcare in Portugal