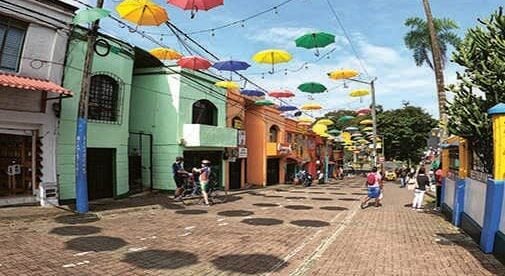 Warmer, and more walkable than other cities in the region, life in Pereira is lived outdoors. ©Sean Keenan.

“As far as I’m concerned,” James McKinnon says, “the weather here is perfect. No central heating, no need for air conditioning. It’s one of the reasons I chose to live here.”

We’re in Pereira, a city in Colombia’s central highlands which, along with nearby Manizales, is gaining momentum as an expat hub—particularly with digital nomads and slightly more adventurous relocators.

Pereira’s not a place noted for its historic architecture, but on my recent visit to the Colombian highland city, I managed to bag a room at the Hotel Don Alfonso, which is the exception to the rule. It’s a glorious little place, tucked back about 20 feet from the sidewalk on the Avenida Circunvalar, and about 200 years back from the modern high-rises that are more common in the city.

James met me in the hotel’s library, and was as delighted by the ambience as I was. It’s the picture of Spanish colonial elegance, from its velvet divans and leather-bound hardbacks lining the walls, right up to the ceiling fan that gives it an Old World tropical atmosphere that could feature in a Gabriel Garcia Marquez novel.

Actually, although Pereira is located well inside the tropical latitudes, you wouldn’t necessarily guess it by walking the city streets. The extremes of equatorial heat are softened by its comparatively high elevation. At almost 5,000 feet above sea level, the effect in Pereira isn’t quite as pronounced as in, say, Cuenca, Ecuador, or Cusco in Peru, but it’s noticeably milder here than you’d expect from a location relatively close to the equator.

It’s not the sole reason that James—a retired serviceman whose lengthy career in military intelligence brought him all over the globe—chose to settle in Colombia, though. “I fell for the people here,” he says. “You know, if you ask someone for directions here, they don’t just tell you where to go, they’ll walk you there.”

For James, it’s ironic that it was the Colombian people who made him fall for the country, given that the specific Colombian who drew him here turned out to be a short-lived attraction.

“I actually came here to chase a woman I met online. That was back in 2015. I’d been divorced for three years, I spoke good Spanish from my years in the military, and I decided I wanted to visit this woman I’d met. She lived in Cali, down in the south of Colombia. Well, I bought a one-month ticket and headed down there, full of romance. The relationship lasted two days,” he laughs.

People here are never, ever rude. That’s a huge deal.

“I had plenty of time left on my ticket though, so I went traveling. I found that the people I met were really nice, really respectful. It was addictive. I figured out pretty soon that I just didn’t want to go back.”

Knowing the language is a bonus for James, and there’s no doubt that it makes life easier for him in Pereira.

“It’s useful to know Spanish here,” he says. “Pereira’s not really an expat enclave. There are plenty of expats here, but it’s not a place where they cluster together. Everyday stuff isn’t a problem, but when it comes to visiting a doctor or dentist, it’s better if you know the language.”

Speaking Spanish well (along with Arabic) was a key part of James’ career in Army Intelligence, and it’s a postretirement legacy that pays social dividends in his new life in Colombia.

“It makes it easier to get along with the locals,” he says. “I have more friends here than I ever had in the States. Most of them are Colombian. I do have expat friends here too, but they mostly live in Medellín. The expats I know are mostly retired soldiers like me, but I have more Colombian friends now. Colombians really like to talk. So do I. It’s always interesting.”

On my visit to Pereira, the city was buzzing with people having al fresco lunches and afternoon strolls. Locals and expats enjoyed warm weekend evenings at outdoor venues (I spent a while within earshot of the Centro Cultural on Plaza Victoria. On a Friday evening, the repertoire of a full-blooded symphony orchestra was loud enough to fill the pedestrianized square).

Most importantly, for me at least, was that walking around Pereira city center was a pleasant way to spend time. The major cities of this region of Colombia (by which I mean Periera, Armenia, Manizales, and Medellín) all enjoy the spring-like climate that’s so attractive to expats in search of year-round comfort.

However, what Pereira has that sets it apart is a compact and relatively flat downtown area that’s genuinely walkable. Naturally, that applies to the largely pedestrianized streets in and around its social hub—Plaza Bolivar—but even when you get away from that central commercial district, things are good for pedestrians.

A footbridge links the downtown area with the colorful Calle Encuentro zone’s hip bars and outdoor cafés. From there, the sidewalks are wide, and the crossing points served by traffic lights, so that it’s a stress-free stroll up to the nightlife and dining of the Circunvalar neighborhood.

That might not sound like much, but when you’re there on the ground, it’s a huge relief to feel confident walking in a city where the pedestrian’s needs are catered for. Walking in some Colombian cities can really jangle the nerves, but Perieira’s an easy place to stroll.

James, whose work brought him to 22 different countries over the course of his career, takes full advantage of how easy it is to get around the city. He doesn’t need a car, since public transport is remarkably affordable here (for reference, my own one-hour ride from Manizales to Pereira on a comfortable, air-conditioned bus, cost $3.15). 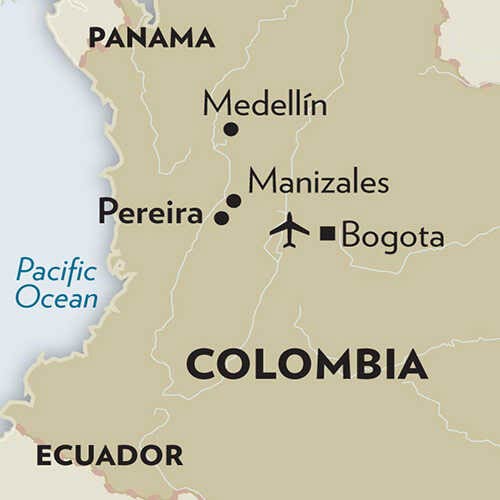 The transport options are fun, too. “I run at the UTP track for exercise. That’s a technical college here in Pereira. I get to take a cablecar to go there, since it’s across the other side of a deep valley. Normal transport, like buses and taxis, is very affordable. You can get most places in the city by taxi for 6,000 pesos. ($1.25)”

The savings don’t end there. It’s one thing to love a location and its people, but practical matters are important too.

Compared to Orange County, California, where James hails from, Pereira’s costs seem from another world. Count on $5 or less for a cold beer and a huge plate of bandeja paisa at a downtown restaurant (it’s the regional dish—a mixed grill of pork chop, chorizo sausage, salt pork, fried egg, beans, rice, and fried plantain that will leave you feeling stuffed). Sure, the romantic/fashionable joints on the Circunvalar restaurant strip will charge more for a fine dining experience, but when you need a solid lunch, the humbler spots downtown are hard to beat.

It’s a city where the savings apply across the board. James rents a three-bedroom, three-bathroom townhouse in a gated community with a shared pool, gym, superintendent, and communal gardens for less than $300 a month.

“I probably won’t leave here again,” James says. “I’m pretty much done with exploring. I’ve figured out how to live well here. When I first arrived, I was shopping at the wrong places, and paying twice as much as I needed to. That’s not because of being charged gringo prices—there’s no “blue eye tax” here. It was just that I was going to the wrong places.

“I go to markets now, they’re much more affordable. If you know where to go, you can get everything you need. I know, in Pereira, that if I need some sort of American product like a specific shampoo or something like that, I can get it. That was a big part of my decision to settle here. It’s sophisticated that way.”

And healthcare? He hasn’t needed it much, so far. “There’s a clinic over in Medellín that accepts Tricare payments, I’ve heard. Personally, I just pay out of pocket for anything I need. Medical care here costs about one-tenth of what it does in the U.S. I’ve been to the dentist for regular cleanings, and I got an infected spider bite that needed medical care once. In both cases, the care was good. And again, about one-tenth of what it cost in the States.”

What keeps James in Pereira, though, isn’t the low cost of living, even though that’s a positive factor. More important, for him, is the lifestyle and people. “Colombia is addictive. Colombia’s people are addictive. I know so many people who came to visit and just ended up staying. Everyone’s very respectful of elderly people here, and I’m not getting any younger. And, on a personal level, it’s really easy to meet nice women here, and they’re gorgeous!”

Perhaps, though, the most important detail is the one that James leaves until last. “What Colombia gives me is that people are never, ever rude. That’s so important for veterans, especially if you suffer from PTSD. When you’re dealing with that sort of trauma over years and decades, it’s really important to be somewhere where people are nice to you. That’s a huge deal.”

It leaves me with plenty to think about as we wrap up the interview and take a quick tour of the hotel’s splendid colonial courtyard. Nice people are a huge deal.