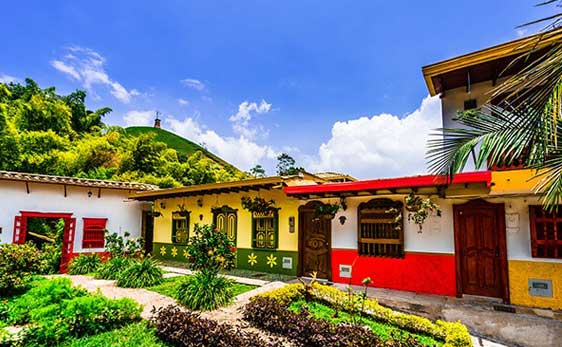 Culture and Traditions in Colombia

Colombia is one of the most geographically, linguistically, and culturally diverse countries in Latin America. Its main cities are Bogota, Medellin, Cali, and Barranquilla. The climate varies greatly between regions, which are positioned in zones like the Amazon rainforest, the Pacific Ocean, and the Andes Mountains. The terrain can range from flat planes to mountainous peaks with snowcaps. There are several special things that make Colombian culture exceptional and unique.

Celebrations and Dancing in Colombia

Colombians love to dance at family gatherings or when celebrating their favorite soccer team’s victory. You’ll frequently find people dancing the salsa, merengue, champeta, bachata, or cumbia. Other popular styles include the mapale and porro. For the expat who wants to learn to dance, there are many dance schools and cultural centers offering weekly classes. In Medellin, salsa classes are available at studios like Dancefree, in person, or on Zoom. The city of Cali is considered to be the salsa capital of the world. If you’re interested in experiencing Colombian nightlife, visit La Topa Tolondra and witness old-school salsa dancing like the boogaloo, the pachanga, and the mambo. Cali is also a popular location to see national and international artists perform live.

Colombians love to celebrate and dance during the holiday season. Colombia is primarily a Catholic nation and celebrating Christmas is a traditional part of the culture. Colombians like to celebrate Christmas as a family and the festivities normally last throughout most of December. They start with the Noche de las Velitas (Night of the Candles) on December 7, moving on to the first Novena on December 16, an ancient Christian tradition of prayers repeated for nine days. Colombians then focus their attention on the villancicos, singing carols with family and eating natilla (custard) and bunuelos (similar to beignets, or if you’re Canadian, a larger than average Timbit). The celebrations build up to Christmas Eve where people eat a traditional Colombian meal, dance, and enjoy time with their close friends and family.

Football is the passion and pride of Colombians. Fans will watch matches with family and friends to support their favorite team. It’s also common to dance, eat takeaway like picadas or pizza, and laugh while watching the national Colombian football team play in the World Cup.

Cycling has been popular among Colombians since the 1950s. The international success of professional cyclists like Mariana Pajon, Martin Emilio Rodriguez, and Lucho Herrera has increased the popularity of the sport and made it part of daily life. Bogota introduced the ciclovia (cycleway) in the 1990s as part of its green strategy. Since then, it’s become a local tradition to go out every Sunday for a bike ride. The city closes some of the main streets once a week to allow residents to ride their bikes. There are also extensive bike paths, which has increased the use of bicycles by five times over the last few decades.

If you’ve read other articles on our website, you’ve probably heard of tejo by now. The popular pastime involves throwing a puck onto a wooden frame filled with clay and small targets with gunpowder. When you hit the target and set off an explosion, you collect points. A night of tejo isn’t complete without a few beers and appetizers or even a full-on barbecue.

Musical Traditions and Festivals in Colombia

Colombia is known for its many musical traditions, blending Indigenous, African, and European rhythms and sounds together. Known as the land of a thousand rhythms, Colombia has musical genres as diverse as its geography and climate. One of the most popular is cumbia. It is thought to have begun as a courtship dance among West African slaves in the Caribbean coast and is performed using drum rhythms. Spanish and Indigenous cultures have influenced it as well with accordion, guitars, percussion, and the gaita flute. Cumbia is usually performed by men.

Bullerengue is a cumbia-based music sung by women. Industry giants like Toto la Momposita and Petrona Martinez have made the genre a global success. Bullerengue features strong rhythms, dance moves, and improvisational melodies. Large groups of back-up musicians and singers perform a call-and-response style of singing. Vallenato is traditionally performed with a gaita flute, caja or box drum, a guacharaca, a percussion instrument made of cane trunk, and an accordion. Many vallenato artists have found international success, including Carlos Vives and Lisandro Meza.

From the Pacific region, currulao is played by groups of musicians who use the cununo, an African drum, and the marimba. In the Andean region, the bambuco fuses Indigenous and Spanish music styles with some African influences. The bambuco is performed with a mandolin or guitar, and a bandola. The Orinoquia region of the country popularized musical llanera (music of the plains) called the Joropo. The lyrics tell stories about nature, the cowboy lifestyle, and the landscapes.

Colombia is also known for its festivals. In Valledupar, the Vallenato Legends Festival has produced the countries best vallenato artists. In Barranquilla, the Carnaval is the second largest in the world and has been declared a world intangible cultural heritage by UNESCO. The Cali Fair is one of the country’s most popular annual events. It features bullfighting and concerts and has been around since 1957. The annual Festival Nacional del Bambuco in Neiva is a popular destination for Colombians. The Festival de la Gaita in San Jacinto is also a must see. It features many gaiteros groups (groups of traditional flutists) and is located in one of the country’s most scenic towns.

Colombians’ cultural practices and attitudes towards life largely revolve around family. There are several rules of polite society to consider.

When dining out with Colombians, the person who invites the group normally pays for everyone. If you’re dining with the opposite sex, men are expected to pay the bill for women. They also like to open the door for their date. You should avoid chewing gum or yawning with your mouth open or slamming the car door. In general, Colombian taxis and restaurants do not expect tipping. However, some places will ask if you want to include a service fee in your bill.

During meals, it’s common for Colombians to say “buen provecho” (enjoy) before eating. Colombians tend to talk a lot and be quite sociable. You may need to get used to a higher volume of noise. When having a conversation, avoid stereotypes such as mentioning Pablo Escobar or drug trafficking. Colombians were negatively affected by the violence of the 1980s and 1990s and many are still feeling the impact of their experiences. Try to be talkative and transparent. In addition, keep in mind that most Colombians will find it difficult to say no which can lead to misunderstandings.

Expect Colombians to be on Colombian time which means they may not arrive on time for social events. If you’re invited to a Colombian’s home, it’s preferable to say yes, otherwise it will be seen as a lack of interest in friendship. It’s good to be polite with elders. Guests often bring a dessert for the host, and you will likely be offered a tinto (coffee). Despite the Colombian culture of not always being on time, it’s important that you be punctual for business meetings or official appointments.

Colombian art has existed for over 3,000 years. Many pre-colonial gold crafts, ornamental figures, and jewelry were created by the Indigenous Muisca. Some pieces survived the Spanish conquest and treasure-seeking pirates of the Caribbean. They symbolize the mythology and shamanism of the Muisca people. You can find a collection of gold artifacts at Museo del Oro (Gold Museum) in Bogota. The museum is open Tuesday to Sunday and admission is $0.80.

Fernando Botero sparked a new style of painting and sculpting called Boterismo. His works depict people and figures in large, exaggerated size which some interpret as political criticism and others as humor. The Botero museum, also located in Bogota, features many of his pieces. It is located in the historic neighborhood of La Candelaria. Colombian painter and sculptor Santiago Martinez Delgado who started the Mural Movement in the 1940s has also left an imprint on the Colombian art scene. He was known for using an art deco style and painting murals such as the Salon Eliptica. The tradition continues and you can find many street murals around the cities of Colombia.

Nobel-Prize winner Gabriel Garcia Marquez was a hugely successful novelist, screenwriter, and journalist best known for his books One Hundred Years of Solitude and Love in the Time of Cholera. He popularized the literary style known as magic realism, which uses magical elements and events in ordinary realistic situations. His close friend, Alvaro Mutis, poet and novelist best known for The Adventures and Misadventures of Maqroll, was also influential. He won Italy’s International Nonino Prize in 1991, and the Miguel de Cervantes Prize in 2001, as well as the Neustadt International Prize for Literature.