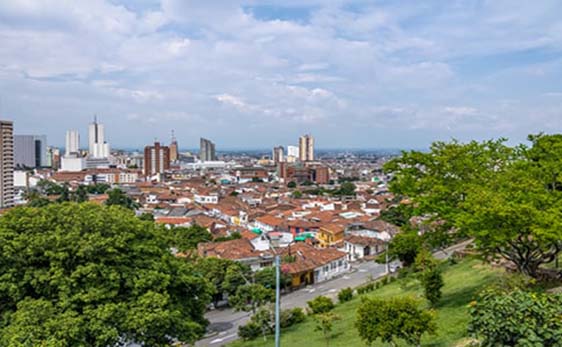 Cali: The Salsa Capital of the World

Cali, a hotbed for Salsa music, is located in a valley adjacent to the magnificent Andes Mountains. Hop in a car, and you can be at the ocean in just a couple of hours.

But Colombia’s third-largest city is best known for its energetic atmosphere, growing economy, and bustling nightlife. With over 2 million people, Cali is a center of Latin culture, industry, and education. If you’re looking for an exciting life in the city, Cali might be the place for you.

Cali’s warm weather, low cost of living, and bustling nightlife all make the city an attractive option for those looking for some Latin flavor.

The Alfonso Bonilla Aragón International Airport has direct flights all over the Americas, including routes to the United States. You can fly nonstop from Cali to Miami for just $390 roundtrip.

Colombia’s nature-filled Coffee Triangle is just four hours away by bus, with tickets as low as $7. You can also reach Colombia’s west coast in just a couple of hours. Transportation to the ocean costs less than $10.

Cali’s ever-expanding public transport system makes it easy to get around the city. A trip on the local MIO bus system costs just $0.70. MIO also operates cable cars, which transport you up hilly areas with 360-degree views of the city. Uber is also available, with rides costing a fraction of what they would in a major United States city.

Transportation isn’t the only place where you’ll be pleasantly surprised by the low cost of living. Housing is remarkably affordable in Cali, with two-bedroom apartments available for as little as $350 per month in upscale neighborhoods. You could buy a 1,000-square-foot, three-bedroom apartment in an expat-friendly location for just $100,000. It’s not a stretch to say you could live very comfortably for as little as $1,500 per month.

Cali is one of Colombia’s highest-rated cities for healthcare, and that’s saying something. Colombia’s constitution deems healthcare a basic human right, and the World Healthcare Organization ranked Colombia’s healthcare as number 22, which is the best in all of Latin America. Colombia ranks higher than advanced economies like New Zealand, Israel, and the United States.

Cali has two of the best hospitals in all of Latin America, Fundación Valle del Lili and Centro Médico Imbanaco. Many medical facilities in Cali have doctors who speak English.

Health insurance in Colombia is wonderfully affordable. Premiums cost up to 50% to 70% less than in the United States. For some insurance plans, you can enroll without being a resident. You can rest assured knowing you’re in good hands.

A little farther south than Medellin (the city of eternal spring), Cali is known as the city of eternal summer. The temperature remains consistent year-round with highs in the mid-80s F and lows in the mid-60s F. Cali is no dessert. You can expect five to 10 days of rain each month, which helps keep the valley lush with vegetation.

Cali is full of diverse neighborhoods, each with its own unique flavor. San Antonio is a popular expat destination with bohemian vibes, vibrant street art, and great vegetarian food. San Fernando is home to a thriving gastronomic scene and a bustling nightlife. Barrio Granada is a safe, upscale area with boutiques lining the streets. Many areas are quite walkable, with housing located right by grocery stores and restaurants.

If you live in Cali, expect to go dancing. Whether you’re attending your first lesson or are a seasoned professional, there’s no escaping Cali’s claim to fame. Salsa takes over the city at night and doesn’t stop until the sun comes up. Whether you’re at a music festival or a Salsa club, you’ll feel the rhythm pulse throughout your body as you dance the night away.

San Antonio, Barrio Granada, and La Sexta are some of the best places to get a taste of Cali’s nightlife. Head a bit farther south to Parque del Perro and the surrounding areas for a buzzing area with outdoor patios, concerts, and people socializing in the streets.

Caleños (Cali natives) are open, friendly, and warm. The people are wonderfully diverse, with a mix of African, European, and indigenous heritage. The melting pot results in a wide range of food, music, and style.

While there’s a growing expat community in Cali, foreigners aren’t as common as in more cosmopolitan cities like Medellin and Bogota. The locals might be interested to hear your story and how you made your way to Cali. They’re likely to invite you to their homes and go out of their way to make sure you feel like you belong.

Things to do in Cali, Colombia

Cali is an urban metropolis that has something for everything. Stay in the metro area for an exciting night or venture out into nearby nature to take a breather from city life.

The Cali River runs through the northern and western zones of the city. Parque de La Retreta, located near Barrio Granada, surrounds the river with vegetation, a gazebo, and statues of cats. Sculptor Hernando Tejada originally donated a massive three-ton bronze cat to the city in 1996.

Ten years later, Cali commissioned Colombian artists to paint 15 new cats. Today, metal felines are scattered throughout the city, with a notable concentration on the banks of the Cali River.

It’s hard to overstate how much Salsa means to this city. Your first salsa class is a rite of passage when you arrive in Cali. Northwestern Cali has a sea of Salsa classes for beginners, experts, and everything in between. If you’ve never danced a day in your life, don’t despair. The helpful instructors (frequently clad in silk or velvet) will guide you through “basic move” until you feel the sweat dripping down your brow.

Many studios offer free classes to first-time students. These introductory courses are a great way to meet locals and expats alike. Shop around during these complimentary classes to find the right instructor for you.

Colombia has the widest variety of orchids in the world. Visit the Orquideorama Enrique Pérez Arbeláez for an open-air orchid museum that takes you through a wooded park. The two-acre museum plays host to special events, social gatherings, and scientific exhibitions.

El Cerro de Las Tres Cruces, a popular hiking destination, is located in the northwestern part of Cali, just to the north of San Antonio and west of Barrio Granada. The one-hour hike is quite steep—you may end up your hands and knees during the most challenging portions. Once at the top, enjoy a fresh-squeezed orange juice to celebrate your victory.

Hike early in the morning for the best views. Plus, you’ll make the climb before the thermometer reaches 80 F. It’s best to hike the trail on the weekends, as the large crowds on the trails help keep you safe.

If you’re looking to beat the heat on a hot Cali day, check out one of the city’s many museums. Learn about sugarcane, one of Colombia’s most important crops, at Museo de la Caña de Azúcar.

If you’re an aviation fan, head over to Museo Aereo Felix, where you can see full-size airplanes, helicopters, and more.

Is it Safe to Live in Cali, Colombia?

Cali has a reputation for being one of the more dangerous cities in Colombia. However, crime has been steadily decreasing for years, and most of the violence occurs in Eastern Cali, a region where most expats never visit.

More upscale neighborhoods like Barrio Granada are much safer, but it’s always a good idea to practice standard safety measures. Don’t walk alone at night, flash expensive jewelry, or carry large amounts of cash. After dark, consider taking Ubers to get around the city. Fares are low and you’ll have peace of mind. As long as you use common sense and avoid risky situations, you should be just fine.