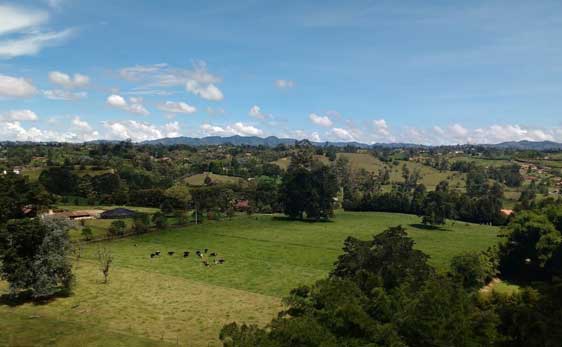 Rionegro is sometimes referred to as the “Cradle of Democracy”

Rionegro is part of the countryside region outside of Medellín commonly known as Oriente. Just 30 miles to the east of Medellín, Rionegro is a beautiful, small city with a population of nearly 80,000 people that is spread out over 76 square miles and includes the sub-area of San Antonio de Pereira. It is a laidback city where you can enjoy pure air, tranquility, and stunning views while being only a short 45-minute ride from Medellín and all that it has to offer.

The city was named after the Rio Negro (Black River) that winds through it and has a black appearance due to the shadows from the many trees lining its banks. The city is sometimes referred to as the “Cradle of Democracy” as it was one of the most influential cities during the 19th century when Colombia was struggling for independence. The 1863 constitution was written in Rionegro. The city was in the running to be named the capital of Antioquia but was eclipsed by the rapidly growing city of Medellín.

The Colombian government is pouring $342 million into road improvements and the construction of the Oriente Tunnel to improve the connection of the city of Medellín with the Oriente area. This will improve traffic flow, reduce travel time by nearly half an hour, and make daily commuting from Medellín to Rionegro uncomplicated.

Rionegro is home to the José María Córdova International airport, the second largest airport in Colombia in terms of number of passengers and cargo shipped as well as number of international and domestic flights. You can get direct flights to the U.S. with American, Jet Blue, Spirit, and Avianca airlines.

In 1993 the state government created a Zona Franca (free trade zone) in Rionegro to help develop productive and competitive industrial processes, promote the generation of economies of scale, and to simplify the procedures of the trade of goods and services and facilitate their sale. The area has attracted several businesses wanting to operate in the FTZ.

The picturesque green rolling hills, cooler mountain air, and tranquil environment are attracting both expats and local Colombians who want to live away from the hustle and bustle of city life in Medellín but still want access to all the amenities.

Retirees can choose to live in stand-alone fincas (country homes), townhouses in gated communities, or an apartment in mid-rise complexes. Prices range from very affordable and modest to extravagant and luxurious, so you will be able to find something that fits your budget.

Technically, San Antonio de Pereira is a subsection of Rionegro, so it has a very small neighborhood vibe and feel. Like many Colombian towns, the heart of the pueblo is its central park. This is a perfect place to relax and enjoy a cup of tinto (black coffee). With the beautiful church at one end facing benches shaded by flowing trees, cafés, restaurants, and shops that surround the perimeter of the park, it is considered a well-kept secret. But word is starting to spread about the wonderful quality of life you can have here.

The special draw of San Antonia de Pereira is its dulces (sweets). Clustered only a few steps from the park you can find at least 10 eateries trying to tempt you with chocolate covered strawberries, rice pudding, merengones, cakes, and layered sweets. And on weekends, vendors fill the central park adding to the number of delicious sweet options. While the weekends tend to be more crowded, daily life is quiet, calm, and relaxed.

If you are a kid at heart or are looking for something to do when the grandchildren come to visit, Parque Confama Rionegro is an excellent spot to spend the day. The park has several swimming pools with water slides, a lagoon with peddle and paddle boats, and a medium-sized train ride around the pond for children and adults. The park also boasts an antique village complete with people dressed in period costume and playing various roles as the town´s inhabitants.

The air quality in Rionegro is much cleaner and fresher than neighboring Medellín which sits in a valley. The higher elevation with its breezes coupled with the less dense population make Rionegro a good place to live if you have breathing issues.

Due to its nearly 7,000 feet of elevation, the climate in Rionegro is cool, especially at night. Year-round daytime highs average 75 F which is perfect for outside activities such as walking, hiking, horseback riding, or just relaxing on your patio with a cup of coffee, tea or an adult beverage. In the evenings the temperature dips down to a cool 50 F, so a sweater or jacket is necessary to be comfortable. Many homes have wood-burning fireplaces in the living room, and chimeneas (terracotta chimneys) on the patios which help keep the evening chill at bay, while offering a cozy, relaxed ambiance.

Rionegro is a self-contained city with everything you need for daily living including box stores like Homecenter (Colombia´s version of Home Depot), large grocery chains Exito, Carulla and Jumbo, and two excellent hospitals, San Vicente Fundación and Clínica Somer. The San Nicolás Mall is a full-service, two-story shopping complex complete with a food court, movie theater, and a free parking garage.

While more and expats are slowly discovering the relaxed city and lifestyle of Rionegro, the number of foreigners is still quite small. This means you will need to know some level of Spanish to get by. Luckily you can enroll in the Spanish for Foreigners program at EAFIT University on their Llanogrande campus.

Owning a car is more of a necessity when you live in the country, but that isn´t necessarily a negative. You can enjoy leisurely drives winding through the mountain roads that give you breathtaking views of peaks and valleys, with each turn more beautiful than the last. Small farms with cows grazing dot the lush green countryside and small roadside stands sell fruit, sweets, and handmade crafts.

If you don´t want to own a car there are taxis and around-town buses, but they are not nearly as plentiful as they are in the city. And for getting back and forth to Medellín, you can take the intercity bus system that will drop you off at the south bus terminal. It is a great option even if you own a car since you won´t have to deal with trying to find a place to park once you arrive in Medellín.

The La Macarena golf club is part of the Decameron All Inclusive Hotels and Resorts chain. You can enjoy playing this 18-hole, par 72, Mark Mahannah designed private course while soaking up the stunning verdant green mountain views.

Cost of Living in Rionegro, Colombia

The greater Rionegro area has a wide range of living options. There are many lovely, modest-sized apartments as well as many large, palatial homes with lots of land for growing fruit trees or keeping livestock. As with most cities, your cost of living depends on the lifestyle you want to have.

Below is a sample monthly budget for a couple living a moderate lifestyle in Rionegro: