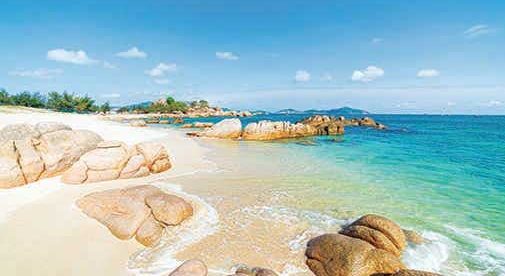 Dreamy beach scenes are part of everyday life on the coast of southern Vietnam. ©FBXX/iStock

I first visited the south-central coastal resort town of Nha Trang, Vietnam in 2005. I’d heard about the Fairy Spring Waterfall and put it on my list of things to do. It was only 12 miles from the city—an easy daytrip on my rented motorbike.

When I arrived, I was met by a gaggle of five local ladies who convinced me that I needed them to guide me to the swimming hole. I had thought that one guide would be sufficient, but they all insisted on coming.

We set off on a primitive trail up a stream and through the jungle, a climb that was more treacherous for me than it should have been due to my poor choice of shoes for the slippery wet rocks and muddy soil.

My guides, all wearing cheap, plastic sandals, scampered up the trail like mountain goats. Soon, they were quite literally pushing and pulling me up the trail and over the boulders as I slipped and slid my way forward. They thought it was hysterical. I thought that even if I had died, they would have made sure that I made it to the end.

I survived the walk to the waterfall—a relief in the steamy heat after the strenuous hike—and took some time to swim and soak in the cool water, listen to the wild chatter of birds and insects, and take in the sights of the lush, green jungle vegetation. Too soon, it was time to return to my motorbike, and my five guides—cheerfully cajoling me and laughing among themselves the entire way—made certain that I made it back in one piece.

That’s when I got the biggest surprise of the day. One woman asked me for my address so that we could stay in touch. Another one informed me that she and I were now sisters. Soon, they all insisted that we were sisters, and when I left, I was mobbed (and a little overwhelmed) with hugs.

Why am I recounting a story from 17 years ago? Because, back then, it was all new to me. That was the first time that I truly realized how family relationships, and deep friendships, dominate life in Vietnam.

Nha Trang was exceptional in other ways, too. I loved the easy-going atmosphere—lazy days on the beach or at a coffee shop, socializing with friendly locals and expats, taking in the beautiful scenery, and indulging in the fantastic food. The weather was perfect and the cost of living was low.

I was only there for a brief time, part of a much longer scouting trip through Southeast Asia, but the warmth of my experiences with the people in Nha Trang endured for much longer. So much so that, in the end, it became the first place I lived in Vietnam.

People tend to be quite deferential to me.

I’m not the only one to feel that way about it. Victoria Jordan, 69, is a single woman from Tuscon, Arizona who has lived in Nha Trang since 2019, and she is as enchanted with the city as I was.

Her apartment, a couple of miles north of the city center, is in a high-rise complex directly across the street from an especially scenic stretch of beach. The soft sands are bordered on both ends by rocky headlands and unspoiled mountains.

“I live away from it all—that’s the beauty of this town. I can go out on my porch and look out over the hills. I can hear the ocean from my apartment, and I can walk across the road to the beach in less than two minutes. The air is clean, the people are friendly, and everything is cheaper here,” she says. “What is there not to like?”

Before she moved to Nha Trang, Victoria taught English for two years in Ho Chi Minh City, Vietnam’s largest metropolis. She found that while she loved living in Vietnam, she wanted to move to a smaller town. She came to Nha Trang and liked it immediately. “I didn’t have to think much about it at all,” she says.

Since moving here, she has continued to teach English—mostly online or through private lessons. “I like to work. I like the social interaction with the students, and I like the challenge of giving private lessons,” she says. “My best friend is Vietnamese and we’ll often get together for language exchange—I see her at least three times a week. We had a picnic on the beach during the super moon. I had her and her three children over for a pancake breakfast during Tet (a local, seasonal celebration) and they loved it. The Vietnamese are lovely people.”

Learning Vietnamese is challenging even for the most linguistically talented English speaker. Fortunately, many Vietnamese speak at least some English, and more than a few speak it fluently, especially in popular tourist areas such as Nha Trang. 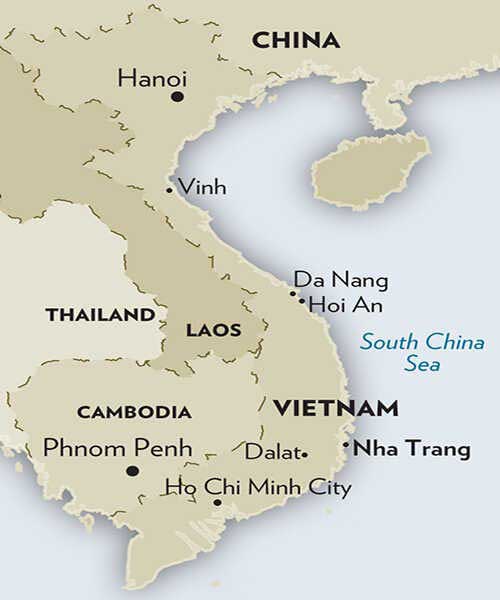 The Vietnamese alphabet is quite similar to English, but speaking with the proper tones—a requirement if you hope to be understood—is difficult. Victoria says, “As long as you’re pleasant, you can get by without knowing a lot. The Vietnamese just love it when they know that you’ve made an effort.”

I agree. More than once, I’ve had a local person patiently watch me struggle to speak a coherent sentence, only to have them laugh and respond in perfect English. Making a valiant attempt is a good way to meet people and gain respect within the local community. When all else fails, Google Translate and other translation applications help enormously.

Victoria describes herself as being a bit of a loner, but she does occasionally participate in activities organized by Nha Trang’s expat community. “Something that I love about being abroad is there is a lot of alone time: I have taught myself how to play the ukulele and have learned some of my favorite songs, and I am working on a writing project,” she says.

“Many expats here socialize over drinks, but I’m not a drinker. Hash House Harriers organizes a hike every Sunday afternoon, and I’ve done that a few times. There are some clean-ups at the beaches or in the parks that I’ve been involved with,” she says. “It’s a nice way to meet people. I recently met a couple of older Canadian women, and it’s been lovely to go for a walk or just to chat with them. If you want to seek out a social life here, it’s quite doable.”

Many of Nha Trang’s foreign residents spend their time socializing at the many expat-oriented restaurants and bars scattered throughout the north part of town as well as in the area nearer the city center by Nha Trang Beach.

Vietnam has an exceptionally low cost of living, and prices in Nha Trang are low even for Vietnam. Victoria says, “I live well here for $800 to $900 per month, which is covered entirely by what I receive from Social Security. If I was in the States, it would cost me at least $2,000 per month for a comparable lifestyle, and that doesn’t include any unplanned expenses like dental or medical care. I couldn’t afford to even rent a shared house in the U.S. with what it costs me to live here.”

Just $295 a month for a two-bedroom apartment.

Victoria pays just $295 per month for her two-bedroom apartment, and another $10 per month for utilities. She’ll open the sliding glass doors of her balcony to views of the surrounding mountains, and the breezes coming from the ocean keep her apartment comfortably cool. During the hot season, which typically lasts from May through August, she says she’ll probably use the air conditioner more frequently, but even so, her utilities will remain low.

Nha Trang is a safe place to live, and Victoria tells me that she’s never felt any danger when she’s been out. “I don’t pull my phone out on the street and I keep my money in my pocket. I’m just aware of my surroundings,” she says. The most likely safety concern would come from a traffic accident, and many of Nha Trang’s expats chose to avoid that by not driving.

“I don’t drive; I’d find it too stressful. Instead, I’ll take Grab Bike [a ride-hailing service similar to Lyft or Uber]. A ride downtown costs around $1 to $1.50. I buy a lot of pasta and general groceries at Moonmilk’s Mart, which is right here in my apartment complex, and the Vinh Hai traditional market is only a 20-minute walk; they have great produce and tofu. I might go to the MM Mega Market [a large warehouse-type store similar to Costco] if I need a blender or something, but since I have to take a cab back home with my shopping bags, and it’s quite a distance from here, I just do it rarely,” she says.

In Vietnam, the concepts of honesty and respect for elders are as important today as they were when they was taught by Confucius more than two millennia ago. Victoria says, “I get more recognition being an older, western, single woman, and people tend to be quite deferential to me. When I’m out with friends, for example, they won’t start eating until I start eating.”

Victoria’s daughter and son-in-law live nearby in Ho Chi Minh City, which gives her another personal connection to Vietnam. She says she hopes to remain in Nha Trang forever, listening to the soothing sound of the waves, enjoying the warm waters of the South China Sea, and soaking up the sunny skies and cool, starry nights alongside one of the most beautiful bays in the world.