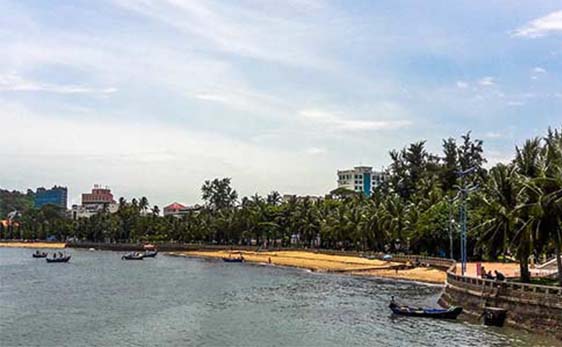 The prosperous coastal city of Vung Tau has been welcoming holidaymakers to its beaches since 1870. It’s close enough to Ho Chi Minh City (HCMC) to play host to weekend visitors who come here to play on the beaches and enjoy the ocean breezes. Surfers come here to take advantage of the waves, and joggers like the area for its year-round weather. Seafood aficionados love the many outstanding restaurants, and everyone adores the laidback, beach town vibe.

Vung Tau’s population of about 527,000 people includes several thousand westerners who have made the city their home. Americans and Australians make up the bulk of expatriates. Though many of them are retired, a few expats have opened small restaurants, bars, and other businesses. 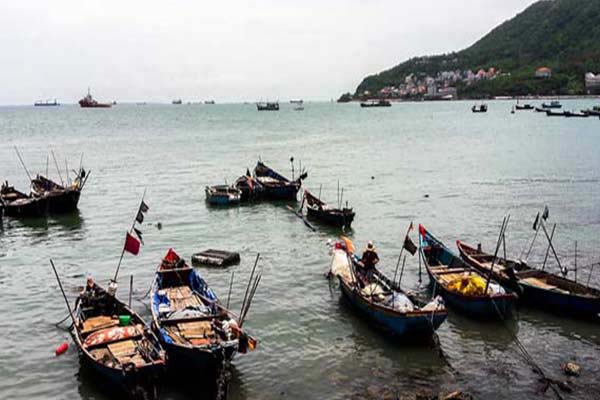 Vung Tau’s location on a small peninsula jutting out into the South China Sea made it an ideal spot for European trading ships to anchor. Later, it became a retreat for Vietnam’s royalty and, eventually, an R&R spot for Australian and American soldiers during the Vietnam War. In 1981, large offshore oil deposits were discovered, turning Vietnam into a major Southeast Asian oil producing country. The rush of oil money into Vung Tau made it the wealthiest province in Vietnam.

These days, Vung Tau has a decidedly middle-class feel to it, and parts of the city appear quite wealthy, with sedate residential neighborhoods, landscaped divided highways, and well-maintained parks and public spaces.

Vung Tau is only about a two-hour drive on a VIP bus—or a comfortable and scenic 90-minute hydrofoil boat ride—from HCMC, but there’s little hustle and bustle here, and you can find just about everything you need.

A rugged headland on the southernmost tip of the peninsula, named Small Mountain, divides Vung Tau’s two beaches: Front Beach and Back Beach. The coastline here is rocky and scenic. Tiny Hon Ba Island and its Buddhist pagoda lie just off the coast. You can see this headland from miles away; the 105-foot Christ statue near the summit, erected by Vung Tau’s minority Catholic community, is the largest Christian statue in Asia. Elsewhere, exotic Buddhist temples and Daoist shrines dot the city’s streets.

Raffles Medical—a joint venture between Vietnam and Singapore—provides general medical and emergency care. Consultations run around $90. A less expensive option is Le Loi General Hospital, which is adequate for basic care, though it’s best if you have a Vietnamese speaker with you. If you have a serious concern, you’re better off going to HCMC, where you’ll find world-class healthcare at internationally accredited hospitals. Vung Tau’s dental clinics are clean, modern, and efficient. Prices for both medical and dental care average 10% of U.S. prices.

Many foreigners have settled down in the quiet neighborhoods near Back Beach, on the eastern edge of the peninsula. Others live near Front Beach or around the downtown. Dozens of small guesthouses offer serviced apartments on a daily, weekly, or monthly basis, with the greatest number around Back Beach. Other than electricity, utilities are generally included in the price, and many properties include housekeeping and laundry, too. Rents start at around $200 per month, while attractive homes with full ocean views rarely exceed $600. If you want to live in style, you’ll have your choice of luxurious villas with private pools and ocean views for $3,000 or less.

Many of Vung Tau’s expats get around with nothing more than a bicycle. It’s not a large city, and with such a pleasant climate, walking or bicycling makes sense. The city itself is quite level, though there are some rocky hills and headlands south and northwest of the city center. If you want greater mobility, shops all over the city rent small motorbikes for $60 or less per month. A taxi ride across town generally costs less than $3. 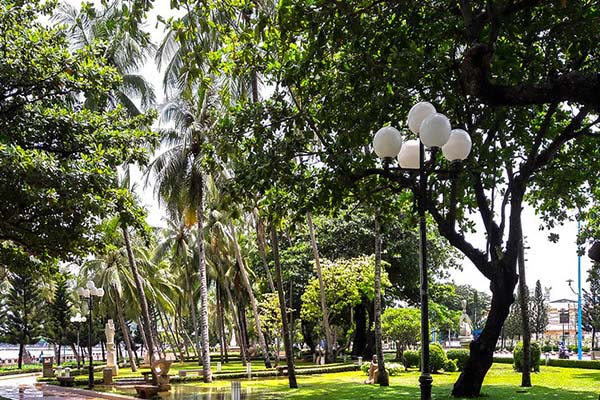 Vung Tau is one of the sunniest places in Southeast Asia with an average of 2,400 hours of sunshine per year. It never gets too cold and it rarely gets too hot. The average annual temperature is a balmy 80 F. Most of the year’s rainfall comes between May and October. Coastal breezes moderate the heat and keep air pollution to a minimum.

You’ll be hard pressed to find a better place to indulge in fresh seafood than Vung Tau. Dozens of fantastic seafood restaurants serve the bounty of the sea straight from the boat to your table. Meals for two at typical local restaurants usually cost less than $10. Street vendors dole outdelicious local dishes for just a dollar or two.

You’ll find more than enough to keep busy here. Organized activities include runs with the Hash House Harriers, soccer games, motorcycling adventures, golfing networks, and charitable events. Back Beach’s soft sand and warm water is perfect for sunning, surfing, and swimming; there are about 150 good surfing days every year. The annual Kite Festival, the World Food Festival, and the Art Kite Festival draw visitors from all over Vietnam. An international-standard golf course, the Grand Ho Tram Casino, and the wide, sandy beaches of Ho Tram and Ho Coc are only 30 miles away.

Front Beach, on the west side of the peninsula, is in a calm harbor close to the city center. It has a nice park and large sculpture garden that runs alongside the coast. The promenade that runs past the harbor is perfect for a stroll; it’s a pleasant place to watch the bright blue boats of the fishing fleet as they move through the harbor.

Cost of Living in Vung Tau 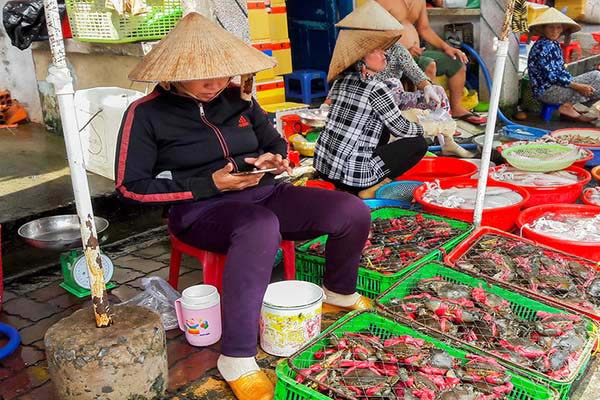 Vung Tau offers a laidback beach lifestyle, close to the city but without the hustle and bustle. Two people can live comfortably on less than $1,500 per month.

Here’s an example of a monthly budget for two people living comfortably in Vung Tau:

It’s easy to see why Vung Tau attracts expats. Its beaches, scenic beauty, delicious food, and large expat community makes this one of the best low-cost retirement havens in Vietnam.

Best Things to Do in Vung Tau

The small coastal resort city of Vung Tau has attracted a devoted following of visitors and expats, who come here to enjoy the beaches, the food, and the relaxed lifestyle. Though it doesn’t have the glamor or glitz of its nearby neighbor, Ho Chi Minh City, it has a charm and friendliness that keeps people returning time and time again.

Here are some of my favorite things to do in Vung Tau:

1. The First Adventure is Getting There

Take the speedboat from Ho Chi Minh City. It’s not only faster than taking a car or bus, but it’s a lot more interesting. The scenic two-hour trip takes you past great views of Vietnam’s biggest metropolis, dense mangrove forests, untouched delta, and open ocean. Ferries run throughout the day, making it a convenient way to get to Vung Tau as well as the easiest return to the ferry terminal and downtown Ho Chi Minh City.

2. Relax on Back Beach

This is Vung Tau’s best beach, both for soaking up the sun and for water sports. Come on a weekday, if possible; it can get quite busy on weekends when hordes of Ho Chi Minh City residents come for their weekend getaways. The wheat-colored sand is soft and inviting, and the water is bathwater-warm. This beach tends to get more waves than most Vietnamese beaches; it’s even surfable during certain times of the year.

3. Take a Stroll along the Promenade

Vung Tau is situated on a peninsula, surrounded by water on three sides. Front Beach is on the southwest side of the peninsula. It’s more of a working, fisherman’s beach than a swimming and watersports one, but a long park and well-maintained promenade run along the coast, with picturesque, bright blue fishing boats docked along the shore. Have a work-out in the exercise park, admire the statues and topiary at the Tran Hung Dao statue park, linger over an ice cream or cup of rich coffee and watch the world go by, then catch a perfect view of the setting sun.

4. Dine at the Best Seafood Restaurant in Town

The huge Ganh Hao Restaurant is right at the ocean’s edge a short drive north of Vung Tau and serves up a tremendous selection of fresh seafood at great prices. Live lobster is prepared right at your table, or you can take your pick of fresh grouper, crab, clams, shrimp, salmon, and just about any type of fish imaginable. Most of their seafood arrived that morning from the many fishing boats in the area. Two people can have a seafood extravaganza for under $25, and you just can’t beat that for value!

Built on a small mountain in the late 1800s during the French era, this little-known military installation overlooked the entire city. The narrow road to access it climbs about 330 feet through thick jungle, passing a few old bunkers along the way, before reaching this almost forgotten monument. Once there, you’re free to explore the abandoned trenches, bunkers, and six massive cannons; you’ll likely have the entire place to yourself. Even most locals have never heard of it.

6. Visit One of the World’s Largest Jesus Statues

The Christ the King Statue, atop of Small Mountain between Front Beach and Back Beach, stands 118 feet high—26 feet taller than the Christ the Redeemer Statue in Brazil. Visitors can climb the steep and narrow, spiral staircase to the statue’s shoulders and access a small viewing platform for a spectacular view of the South China Sea and Vung Tau City. You’ll need to dress modestly—no shorts or tank tops are permitted.

Try banh khot, a delicious local specialty, at Quan Banh Khọt Goc Vu Sua. These crispy little pancakes are fried with shrimp or squid on top and served with fresh herbs and mustard leaves. Place the little crepe on the mustard leaf, top it with herbs, and add diced chilies if desired. Roll everything up in the mustard leaf like a burrito, then dip it in the slightly sweet fish sauce. Warning: they’re habit-forming!

Hon Ba Island, just a short distance offshore from Small Mountain, is accessible by foot during low tide. The little island features a rocky beach and a small Buddhist temple that is open to visitors. Check the tides first, though, or you may have to swim the 800 feet back to the mainland.

Built by the French in 1862, this whitewashed lighthouse sits on top of Small Mountain at an elevation of nearly 500 feet. You’ll be treated to spectacular views of the entire region—the city, the ocean, and a lush tropical forest.

The Bluffs Ho Tram Strip, about an hour’s drive northeast of the city, has a well-maintained golf course open to non-members. This area has what is considered the best beach in the Vung Tau area, too. The Paradise Resort Golf Club is another option; it’s just a few minutes from Vung Tau’s city center.