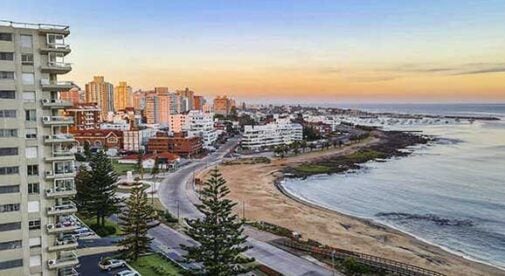 Uruguay is in the Southern Hemisphere where the seasons are opposite. During the summer months of January and February, the country’s beaches fill with vacationers. They come from all over the region and the world to enjoy Uruguay’s beautiful sandy beaches, comfortable climate (with average summer temperatures in the low 80s), high level of social and political stability, and wide range of beach settings to choose from.

After living in Uruguay for 15 years, I can tell you this—you find more attractive beaches than you can shake a stick at. The following are my picks for the best beach in each of the following categories:

Montevideo, Uruguay’s capital and only large city, is located on the Río de la Plata. Its 13-mile-long rambla (coastal promenade and road) passes several sandy beaches. The most visited beach in Montevideo is Playa Pocitos. (In Spanish, “playa” means beach.) But, the Montevideo beach I like best is Playa Ramírez—a smaller, crescent-shaped beach, a little over a mile’s drive to the west.

Like most beaches in Uruguay, Playa Pocitos and Playa Ramírez are both great places to sun and cool off in the water. At both beaches you find a lifeguard on duty in the summer, and at both beaches the sand is cleaned on a schedule. Beach activities at Playa Pocitos include volleyball and bocce. At Playa Ramírez, you’re more likely to see group exercise classes or young people playing soccer.

The reason I recommend Playa Ramírez over Playa Pocitos is the setting. Across the rambla from Playa Pocitos, there are blocks of 10-story apartment buildings. However, across the rambla from Playa Ramírez, there is a beautiful park, Parque Rodó. Among Parque Rodó’s large lawns and gardens, you see interesting sculptures. You can rent a pedal boat to explore the channels of the park’s large pond. One section of Parque Rodó is an amusement park, where you can go on a Ferris wheel and other rides.

Along the coast, just above Playa Ramírez, there is an outdoor roller-skating rink. And just south of the beach is a fishing club, the city’s summer amphitheater, and an 18-hole golf course. Not far from Playa Ramírez you find a selection of interesting places to eat. Accommodation in Montevideo includes many hotels and Airbnbs.

Like Montevideo, Punta del Este’s coastal road and walk is called the rambla. Along the rambla are numbered bus stops called “paradas.” They start at Parada #1 near the base of the peninsula on both the Brava and Mansa sides. The parada numbers get larger in both directions as they get further from the peninsula. Specific beaches in Punta del Este are identified by the parada they are near. Examples of Punta del Este beach names include “Parada 9 Playa Brava“ and “Parada 16 Playa Mansa.”

Most all of Punta del Este’s beaches are beautiful and stand out in their own way. However, if you want to set up your beach towel and sun umbrella on the resort’s sandy-beach epicenter, I recommend Parada 1 Playa Mansa. During the high season, you’ll find interesting people (from many countries) and activities (such as yoga on the beach) here. Water sports on this protected side of the peninsula include kayaking, small-boat sailing, and jet skiing.

But what’s most special about this particular beach is what’s around it. Just to the south, you’ll find Gorlero, Punta del Este’s lively main avenue, as well as Calle 20, Punta del Este’s fashion street, and the boat marina. Across from the marina there are several renowned restaurants with beachfront dining.

From Parada 1 Playa Mansa, it’s a short walk north on a boardwalk to Parada 4 Playa Mansa. At Parada 4 is a pier and the Ovo Dayclub, an on-the-beach club with food, drinks, and entertainment. Across the rambla from Parada 4 is the Enjoy Punta del Este Resort and Casino.

Parada 1 Playa Mansa is near a range of accommodation, from economy hotels to luxury penthouses.  It’s also close to the Punta del Este bus terminal. So, it’s an easy place to vacation without a car.

Note: All of the following beaches described in this post front the Atlantic Ocean.

Twenty miles east of the Punta del Este Peninsula is José Ignacio, a small town with a year-round population of around 300. It is located on its own small peninsula between two large lagoons (Laguna José Ignacio and Laguna Garzón).

José Ignacio is popular with the jet set. They come for its bohemian-village atmosphere combined with world-class restaurants and high-end accommodation. (To maintain its low-key ambiance, local ordinances prohibit tall buildings, nightclubs, and amplified music.)

The Playa Brava de José Ignacio is a long sandy beach that ends at a rocky point with a lighthouse. While it’s popular with sunbathers and surfers, the top attraction is an on-the-sand restaurant called La Huella. It’s a rustic place with a thatch roof. Most of the tables are on a large wooden deck with a canvas cover. La Huella serves simple dishes, such as grilled meat, seafood, and vegetables. But the skilled attention to each culinary detail and the postcard-perfect setting combine to provide a dining experience that will stick in your mind.

Because José Ignacio is popular with wealthy vacationers, places to stay can be expensive. (Summer vacation rentals can go for $10,000 per week and up.) Because of this, I recommend making your visit to José Ignacio a day trip. Eat a memorable brunch on the beach, stroll along the sand, then explore the village, which includes some interesting shops.

Seventy miles east of the Punta del Este Peninsula is La Paloma. It’s the most developed coastal town (with a gas station, a bank, pharmacies, and two medical clinics) in a mostly rural region called Rocha. La Paloma’s centro is on the Cape of Santa Maria. At the end of the Cape of Santa Maria you find a bay (Bahía Grande), with a smaller bay near its mouth (Bahía Chica), and a small island (La Tuna)—so, a bay on a cape, with its own bay, and an island.

The sandy beach along the Bahía Grande Bay is Playa Bahía Grande. Besides sunning and swimming, activities here include beach volleyball. In the summer, you can rent a kayak and visit La Tuna Island. When the wind comes up, Bahía Grande is popular with kite surfers.

Playa Bahía Grande is wheelchair accessible, with handicap parking and a gently sloped ramp to the beach. At times, the local government provides trained staff and amphibious wheelchairs to enable physically disabled visitors to enjoy the water. (Besides flotation, these wheelchairs are equipped with double wheels or extra-wide wheels to traverse the sand.)

Other things to see and do in the La Paloma area include visiting the ocean-facing beaches on the south coast of the cape, and northeast of the cape. Many of them offer good surfing waves when the conditions are right.  Also, just west of La Paloma is Laguna de Rocha, a large body of water that attracts a variety of migrating birds including geese, swans, and flamingos.

You find restaurants and hotels along La Paloma’s main avenue, Nicolás Solarí. Other places to stay include reasonably priced vacation rentals and campgrounds. If you’re on a budget, La Paloma offers good value for money.

Cabo Polonio is set within a huge national park, called Parque Nacional Cabo Polonio. Half the fun of visiting Cabo Polonio is getting there. That’s because the beach and village are about four miles from the nearest paved road with an area of dunes between them. To get across the sand to Cabo Polonio, you can hike, rent a horse, or buy a ticket to ride in the back of a large four-wheel-drive truck.

Once you arrive, you can enjoy time at Playa Cabo Polonio. (Bring a day pack with your swimming suit, towel, and sun protection.) Right behind the beach are trails through the village, where you can eat at a local off-the-grid cafe or browse the kiosks with local crafts for sale.

While you can find places to spend the night in Cabo Polonio, it may be more practical to stay in La Paloma (with the comfort of public utilities), and make your visit to Cabo Paloma a day trip.