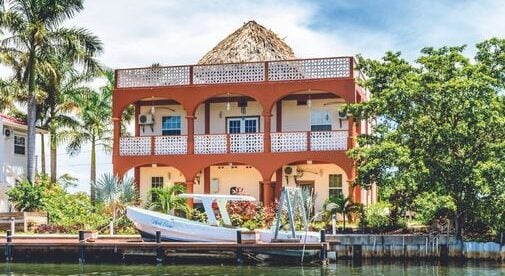 Let’s head to the WestJet website and book a flight to the first tropical place with direct flights,” Dean Astren suggested to his wife, Kim.

Belize, by alphabetical virtue, won this simple contest. And that’s how Dean and Kim found their new home.

While it may seem like a strange way to relocate, it wasn’t as spontaneous as it might seem. After years of growing increasingly disillusioned with their lives in North America—the high prices, long, cold winters, gridlocked highways, and the work-until-you-drop-to-buy-the-latest gadget mentality—Dean and Kim already knew they wanted out of Calgary. But, having vacationed only at all-inclusive resorts in Mexico for years, the tired Canadians, now in their 50s, had no idea where they wanted to go.

“Our kids had grown up. Our son moved to Vernon, British Columbia, our daughter was already married and resettled, and we were feeling lost in our huge, three-story house,” Dean recalls. “When we realized that neither of us had even stepped foot into our finished basement in over a month, we asked ourselves what the heck we were doing. We were paying skyrocketing taxes and insurance premiums on a big home—just for two of us!”

“Our jobs were mobile, we weren’t getting any younger, and our cage door was wide open,” adds Kim. “Yet we were frozen on our perch like scared, little brainwashed finches.”

They booked a trip to a 12-room resort on St. George’s Caye, just off the coast of Belize City, a secluded adults-only complex surrounded by soft jungle greenery, where they could enjoy some barefoot delights on the Caribbean’s white sand beaches.

“It was so quiet, completely unlike the resorts we’d experienced in Cancún—where you need to get up before the sun and throw your towel on a beach chair before 800 sun-worshippers invade,” Dean says. “Here, it was like we had the whole island to ourselves. We wandered down to the sea after breakfast and had our choice of hammocks. Nobody was around. We plunked down with our fruity drinks and a couple of books and just chilled in the solitude, listening to the waves lapping the shoreline and watching sandpipers peck at the sand.”

That’s Belize in a nutshell. With just 400,000 inhabitants spread out across the entire country, there’s plenty of room for everyone (it’s smaller than the state of Massachusetts).

Pelicans swoop to pluck minnows effortlessly from the sea. Herons dot expansive, Florida-style beaches that feel abandoned save for the occasional quiet sunbather. Seahorses cluster around mangroves near the island’s pier—from which daily fishing charters, snorkeling, and diving tours depart to the nearby coral Mesoamerican Barrier Reef. It’s the second-largest in the world.

Kim found herself captivated by the number of people, old and young, out scuba diving, kiteboarding, kayaking, and zip lining. Each night at dinner they were joined by other couples recounting their day’s escapades. And, since the official language of Belize is English, communication was always easy.

“You could paddle all the way around the island, and it was so shallow and clear you could see down to the ocean floor. The tropical fish flittered around constantly, in a flurry of dancing colors,” says Kim. “And, best of all, if I tipped over, I could just stand back up.”

Unlike previous vacations, by the end of their trip, Dean and Kim felt as though they were leaving home rather than returning to it. “We are coming back, right?” Kim pleaded as they waited for their plane back to Calgary.

“You bet we are!” Dean promised. In fact, before they left the airport, they’d already booked a return flight. 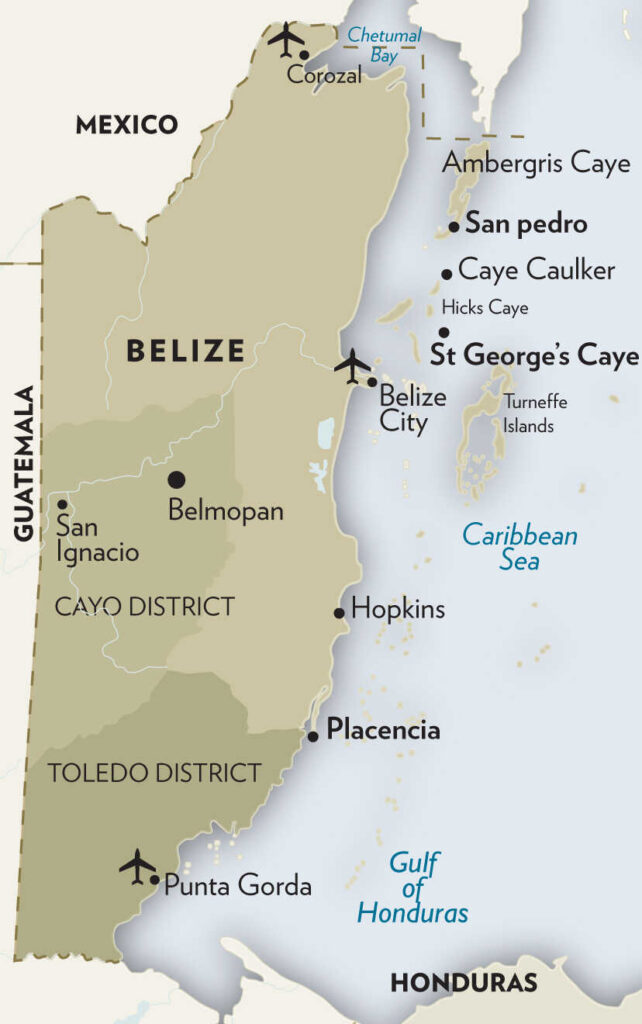 Dean and Kim returned to Belize three more times, each time exploring different zones of the country’s rich mosaic—Caribbean beaches to dense tropical jungles and busy urban centers. They’d beachcomb for shells and ocean treasures in the morning, then be high in the mountains, or exploring hidden Maya monuments in the jungle, by lunchtime.

“We spent two weeks in San Pedro, Belize’s premier tourist destination. It has a real party vibe,” says Dean about the main town on the island of Ambergris Caye. “If you’re in your 20s or 30s it’s probably a great place to be. But it wasn’t really our cup of tea.”

They also explored the country’s capital city of Belmopan, the Mennonite community of Spanish Lookout, the jungle town of Burrell Boom (home to hordes of howler monkeys), and Hopkins—a small, coastal Garifuna village.

But it wasn’t until their third foray to Belize, in 2020, that they discovered Placencia, a low-key seaside village at the tip of an 18-mile palm-lined peninsula on Belize’s southern Caribbean coast. Dean and Kim immediately knew this was the place for them.

“We made the decision right then and there to return home, sell most of our stuff, and put the rest into storage,” recalls Dean.

Using money from the sale of their Calgary home, Kim and Dean put an offer on a 200-foot-wide oceanfront property in the Maya Beach neighborhood. It featured a one-bedroom raised home, with two screened-in porches overlooking the Caribbean Sea, plus two additional onebedroom, income-generating units. An open-air palapa rooftop terrace offering a panoramic view of the surrounding beach served as icing on the cake. The house originally listed for a million dollars, but due to a downturn in the post-COVID market, the Astrens negotiated a selling price of $650,000.

Since it was a double-sized property, they split the lot and sold the other half to a friend from Calgary who had became equally inspired by Placencia during a recent visit.

The idyllic property is located alongside the Naia Resort complex, home to million-dollar beachfront estates, about halfway down the peninsula.

Dee Snider, the lead singer of the hit ’80s rock band, Twisted Sister, lives just a few doors down. Dean, a fan of Snider’s music back in the day, often waves to his neighbor during his morning walks, as the singer sits on his seaside patio. “It’s kinda surreal,” Dean admits. (The neighboring Naia Resort beachfront bar, overlooking the Caribbean, offers drink treats like Dirty Banana cocktails and Espresso Martinis for just $7.50 each.)

Kim works as a real estate agent in Placencia, showcasing the area to others considering similar lifestyle changes, while Dean has put his training in construction management and engineering to good use, offering property inspection services and supervising local expat construction projects.

Although builds can be completed economically here, with construction labor available for $2 an hour, projects have a way of dragging on for longer than they perhaps should.

So Dean visits sites daily to ensure that builds are progressing on schedule and that they’re completed to proper standards— something that he has found is not always consistent in Belize.

Dean says he enjoys supporting those folks who are adventurous enough to walk in his footsteps and transplant themselves in Placencia. “If they hire me [to supervise their construction],” he says, “I’ll make sure their dream comes to fruition.”

The Astrens have joined a large and supportive base of local expats, who meet regularly at poker, trivia, and bingo nights at nearby pubs. There’s also a bowling alley, pool hall, and mini golf nearby, where friendly expats and locals hang out and share stories.

Kim is happy they didn’t listen to the naysayers. “Don’t let anyone discourage you,” she says. “When we announced we were moving here, people kept asking, ‘What if it doesn’t work out?’ Well, it’s no different than moving to another city or state. If it doesn’t work out, you just move back home.”

While Dean concedes that Belize isn’t for everyone, he and Kim now consider it their home.

“Five years after buying my home in Calgary, I still didn’t know my next-door neighbor. In Belize, within a week, I knew six people on my street,” he says.

Friendliness truly prevails in Placencia (and all round Belize). Whether it’s the locals passing on bicycles—their baskets filled with fresh fruits and veggies— strangers strolling along the beach, or construction workers passing in their trucks, everyone greets you happily.

Dean smiles. “It’s really a different world down here, and we have absolutely zero regrets.

Guide to Traditions and Culture in Belize