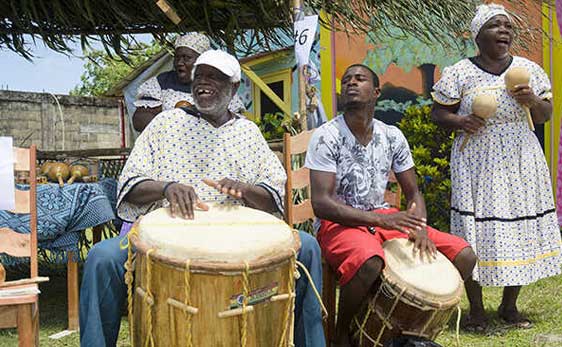 Traditions and Culture in Belize

Guide to Traditions and Culture in Belize - Food, Beliefs and Customs

The different cultures in Belize—within the seven districts—are all unique in their own right. While many share some of the same customs and traditions (rice and beans is a food staple throughout the country), each culture has unique traditions, too.

Down in the southernmost district of Toledo, I am fortunate to have semi-retired in Belize’s most diverse district, where old ways and traditions remain untouched by modernism and Western society.

Dying as a Belizean is handled much differently than in most of the United States. Here are some examples of the various beliefs and ceremonies you can find throughout Belize:

Depending on where you are from, you might have experienced a wake or two, during which time family and friends of the deceased gather at a common location, bringing food as a somber mood fills the air.

In Belize, there is a stark contrast: a wake is more like a celebration. Which is not to say there are no mourners. Rather, since Belize is so small, many of the families are related, so wakes become gatherings of dozens of people with traditional wake sandwiches (bread with a simple meat spread), rice and beans, coffee, liquor (usually rum and/or beer), and music (usually performed by local musicians on their guitars and/or drums, sometimes a keyboard, sometimes a DJ). Nobody is ever turned away from a wake—it’s poor manners and bad luck (nor, coincidentally, are they turned away from a wedding).

The next day, a vehicle—usually a pickup truck with several male volunteers—will take the casket to the burying ground (as it’s called here), for them to be laid to rest in their final, concrete tomb.

The Garifuna culture shares a unique death celebration called Dugu. It is a tradition brought from the coasts of Africa, by slaves brought to Belize.

In the culture, it is believed if a person becomes sick and no Western medicine or doctor can cure the ailment, it is due to the spirit of an ancestor who is displeased. The subsequent ceremony to please the ancestor and cure the illness is quite detailed and involves shamans (Buyai) determining everything from the type of dress to be worn (usually traditional Garifuna garb), foods, length of time, and more.

In October, Mayans traditionally place food and drink out for their ancestors who have passed, to honor their lives. The food and drink are placed near the doorway. Incidentally, it is considered bad luck to walk forward into the house when you are returning from a funeral, for fear the spirits will follow you into your house.

Practiced by Mestizo, East Indian, Garifuna, and Kriol cultures, Nine Nights is a Caribbean tradition that involves a special ritual to be performed nine nights after a person has been buried. It is a sacred time when family members return to the grave with food, alcohol, cigarettes (if the deceased was a smoker), a candle, and other items (including a machete).

Death in Belize is not the only interesting thing to know. There are certainly some other traditions and cultural differences visitors should try to be aware of before coming, bearing in mind that different cultures—and different districts—all vary in their practice of these traditions.

I’ll be honest: I struggled to maintain a regular weight while living in New England and, really, for most of my life. But, within three months of living in Belize, I lost 60 lbs and have stayed that way. I credit the nutrition here—fresh, locally grown produce and animals—as well as a lot of water, walking, and heat!

Still, Belize has traditional foods that are revered by each different culture.

While many Mayans—both Mopan and Ke’tchi—obtain professional work either in teaching, government, the police, or Belize Defense Force, there are, by far, many more that are farmers in more rural districts. They still follow the farming ways of their ancestors, planting, harvesting, and cutting by the moon. Traditionally, the Mayan women are up by as early as four a.m. to prepare tea or coffee for the men of the house.

They have a simple breakfast of corn tortillas with maybe beans or leftover caldo—a very simple chicken soup which can also be made with pork. The men go to the farm to get to work (or go hunting), returning promptly at noon, where their lunch awaits, prepared over a fire hearth and, most likely, harvested from one of the chickens seen pecking around their yards each day.

This is a fish dish prepared and revered by the Garifuna culture. It consists of coconut milk, ripe plantain smashed in a traditional pestle and mortar, green plantain, okra, onions, whole fish, herbs, and seasoning. More recently, some have begun adding pigtail (another Belizean favorite food) to their hudut but traditionalists frown upon this practice.

From the cohune palm tree, cohune cabbage is a favorite of the East Indian population (they are termed “East Indian” to differentiate them from the Mayans because Belizean locals refer to Mayans as “Indians”).

The process of getting a cohune cabbage from the tree is quite labor intensive and can take quite a while. Generally, at least two people with a machete chop away at a mature cohune tree until reaching the soft, white center. Much like what we call palm heart or heart of palm in the U.S., cohune cabbage is cooked up with curry, rice, and chicken.

In southern Belize, there are dozens of Mayan villages and a handful of both Garifuna and East Indian villages. Each have their own energies and levels of advancement. Some down here still don’t have electricity, while others have dynamic water systems, internet, and electricity.

It is customary to always seek out either the leader of a Mayan village (Alcalde) or the priest to announce yourself and be welcomed into the community. This is just a matter of respect for their privacy and culture.

It’s also frowned upon, when visiting a house, to hail the female first. It’s considered disrespectful to not seek out the man of the house first.

It might be a bit of a culture shock to see how some villagers do ordinary chores like cleaning, laundry, and dishes. In the Mayan villages, don’t be surprised to find elder Mayan women in the river, slapping laundry against strategically placed flat rocks to do the laundry. The children will bathe alongside them as they stand topless in the water, rubbing soap over the clothing with fervor.

In villages where there are no water systems, it is the job of the children and women to haul water from the creek or river, to wash dishes, cook, and clean the house.

The Garifuna culture is passionate about their heritage and ancestors. Having been brought as slaves to the Caribbean, it has only been over the past few decades their voices have rung out over the community.

They are notable drummers, playing traditional drums just about any time in any Garifuna village or locale. The beat is contagious and one can’t help but move to the heartbeat that is deeply rooted in Garifuna culture.

While Belize has some fantastic views, exciting excursions, timeless escapes, and delightful people, it does have its darker sides.

If you’re an animal lover, you might want to brace yourself and be prepared. It is not customary in Belize to have beloved pets as family members. While there are always exceptions, it is traditional that cats and dogs are kept more as tools—necessary for protection against predators, thieves, pests, or for hunting—than they are for furry companionship.

It is not uncommon to find malnourished, ill, over-bred, or mangey dogs (locally known as “potlickers”) roaming around. Many families do not buy dog food but, rather, feed the animals table scraps. In the case of hunting dogs, their loot is most often the innards of their catch of the day or some other part.

Other Beliefs and Traditions in Belize

Belizeans eat different foods, dance different dances, speak in a broken English dialect known as Kriol, and have a deep connection to their unique heritages. Don’t be shocked if you’re offered a delicacy of Iguana (pronounced “guana”) or armadillo to eat—and don’t decline, or you’ll likely never be invited to eat again.

Go ahead, give it a try. After all, Belizeans are largely very personable, friendly, and giving. They enjoy sharing their experiences and take pride in their families. You might just fall in love with them, the same way I did.