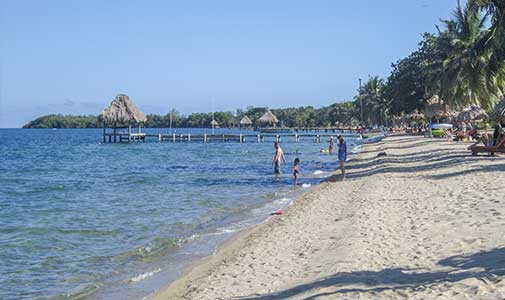 Belize is located in Central America, south of Mexico, and east of Guatemala, and although the country is only the size of New Jersey, with a population of less than 400,000 people, it has a wide variety of weather and terrain. From 240 miles of coastline, to jungles and mountains dotted throughout the middle and out in the Cayo’s, Belize has rich geographical diversity. Typically, visitors to Belize fall love with its laidback vibe and Old-World charm, with some areas remaining unchanged for hundreds of years.

With relatively constant temperatures throughout the year, with mid 80’s F in the summer, and mid 70’s F in the winter, Belize offers a perfect winter escape for visitors from the U.S.

Sitting north of the equator, it is also the most northern reaching Central American country, enjoying an equal 12 hours of daylight and darkness with very little variation during the year. Typically, sunrise is around 5:30 a.m. daily, with sunset around 6:30 p.m. year-round.

The weather in Belize varies somewhat from region to region within the country, but because Belize is such a small country, some country-wide generalizations hold true. The seafront areas are known for a refreshing year-round breeze that keeps humidity and high temperatures feeling manageable, with hotter temperatures being felt inland.

What are the Seasons in Belize?

Belize has “subtropical” weather which denotes distinct wet and dry seasons, referred to as dry and rainy season. Dry season takes place from November to May, with rainy season from June to October. During rainy season precipitation varies in different parts of the country, from rain at night, to storms, but it is rare for there to be a full day of rain at any time of the year. It does tend to rain almost every day in rainy season, but these are short bursts, and generally at night.

It is not unusual in Belize for a day to start with sunny skies, only for huge clouds to accumulate over parts of the country for a brief period, with rain and lightning—and then clear up into a sunny day. Unusually, there is a period in the middle of rainy season, around August, that is known to have mini-draughts, so expect several weeks of dry weather around then. During “Mauger season” the breeze cuts down, and bugs can be quite bad, but that is entirely dependent on the wetness and wind speed.

The northern part of Belize, home to popular Corozal, is the driest and coolest part of Belize and receives only a third of the rainfall of the far south. Real estate prices in Corozal are much less than what you will find in other areas of Belize, and with less rain than in most areas to the south, Corozal enjoys a tropical climate with less of the tropical rain. One benefit of less rainfall in Corozal is that you will experience less puddles after storms; as Belize is still a developing country, the drainage in some areas can be problematic during rainy season. Most expats will say they don’t mind rainy season. The farther south you go, the wetter it will be, with Punta Gorda the southernmost part of Belize getting around 160 inches of rain a year, compared to only 60 inches for Corozal. Punta Gorda is best known for a robust Maya influence, great fishing, laidback lifestyle, and lush landscaping. Punta Gorda town is a great place for those looking for a low cost, tranquil retirement haven with warmer temperatures.

Overall, the weather in Belize is one of the most compelling factors for a move here. Someone who savors the feel of tropical temperatures, gentle breezes, and enjoys the ease of going from beach to jungle in a matter of hours, will love the diversity in Belize.