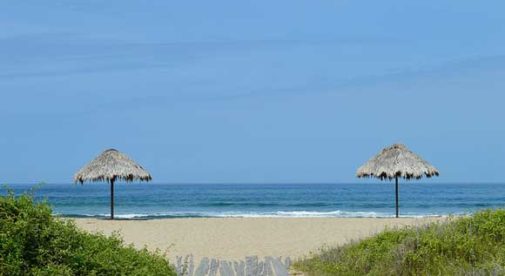 My wife, Rita, and I just returned from a three-week visit to the States and, as usual, we are very happy to be home. Home for us, at least for the past three years, is the resort town of Salinas, on the southern coast of Ecuador. Of course, we enjoyed spending some time with family and friends, but once again we were almost overwhelmed by how wild and chaotic life seems in the States compared to our peaceful lives on the Pacific sands.

Here in Ecuador, we have become used to things being more or less the same, all of the time. For example, we are only two degrees south of the equator, so our days and nights are always just about the same—12 hours long. Fresh fruits and vegetables are always in season, so whether it’s strawberries or asparagus, it’s just the same and just as fresh whether it’s May or November. Our coldest nights of the year rarely dip under 70 F, and our warmest days are usually under 90 F. Most of the time it is the same old 80s F during the day, the same old 70s F in the evening.

Things were quite different in the U.S. When we arrived in West Virginia, the temperature was 18 F and there was six inches of snow on the ground. Two days later, it was 75 F and sunny. That night dipped into the 40s F and it rained hard. Another day of freezing temperatures, then suddenly warm again. There were several times when we had a bigger change in temperature in one day than we have all year at home in Salinas.

No wonder we used to get colds, flus, coughs, and runny noses all the time. It seemed like we were always putting on clothes because it was too cold, then taking them off because it was too hot. One day we needed a coat in the parking lot, then had to carry it around in the warm, overheated mall, the next we were in shirtsleeves outside, but freezing in the now air-conditioned mall.

The pace of life is very different in the States. The sheer volume of traffic was a little unsettling, and everyone around us seemed to be rushing to get somewhere else. In Ecuador, we are used to sitting around talking with friends when we dine in restaurants, sometimes spending two or more hours over the meal. In the U.S., we were being handed our bill with the entrée, and asked if we needed a box (hint, hint) if we put our silverware down for a moment.

So it truly is a relief to be back home in Salinas, busy working off the 10 pounds we gained during our visit to the U.S. from the combination of less healthy food and less opportunity for exercise and walking because of the changeable weather and rushing about. How nice to be back to the same old walk to the mercado (market) for fresh produce, the same old morning and evening walks down the malecón (promenade) by the ocean, and the same old shirt-sleeve weather.

Usually when people think about moving to the beach, it is to enjoy sunshine, surf, sand, and good weather. When my wife Rita and I moved to Salinas, Ecuador on the Pacific coast, great weather was at the top of our checklist.

My wife and I have been living the “endless summer” lifestyle in Salinas Ecuador for three years now, and I have to say it has been pretty fantastic. We love how the waves are the last thing we hear as we fall asleep, and that they are the first sound we hear when we wake up.