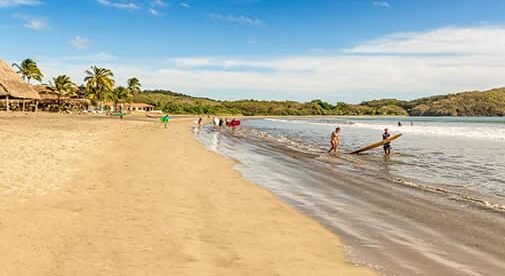 Panama’s Azuero Peninsula, where Anita and John set up home, is the stuff of fantasy.

An infinity pool, a private beach, and a covered outdoor living room and dining area. A creek with waterfalls spilling down to the ocean, and magnificent tropical gardens which toucans and parrots visit daily. It took three years of driving around Central and South America, Mexico, and 22 U.S. states for John Korte and Anita Rogers to find their “dream” property, but find it they did, back in 2012.

On Panama’s Azuero Peninsula, where the sun sets every evening into the Pacific, their beachfront home has panoramic ocean views from every room.

The Texas couple are expats with a capital E. Over the past 20 years, they’ve lived in Roatán; Antigua, Guatemala; and Argentina as well as their current sojourn in Panama. John is a retired financial planner. Anita owned an import-export business selling high-end Guatemalan handicrafts to the U.S., as well as a florist’s and three handicraft shops in Guatemala, where her mother owned Hotel Atitlán, near Panajachel.

The duo own a specialty tour operation, ExploreAmazingPlaces.com, which takes groups of artists to art workshops in Panama, Guatemala, Ecuador, and Cuba. They run it part-time with a younger partner in Arizona, by finding and paying instructors to bring painters, photographers, and textile artists on tours. John and Anita started the business when they married, 20 years ago, as an interesting way to supplement their existing incomes (John has a pension and Social Security income, while Anita has investments from her years in business).

The couple purchased their three-and-a-half-acre property and house for under $500,000. “We fell in love with it and saw the potential,” says John, describing their many additions and improvements. “Anywhere else in the world, it could have easily cost $1 million or more.” It’s now a rare example of titled beachfront property in Panama. They bought it untitled, which is a bit of a gamble. Securing a title took five years and $30,000—but it paid off.

Anywhere else, it could have cost $1 million or more.

Why Panama? The couple warmed to the congenial expat community near their home, which is a five-minute drive from Torio, a small fishing village. It’s also just 20 minutes to Mariato, a town with three grocery stores, a bank, two hardware stores, a gas station, and a medical clinic. “We’d seen just about every expat community in Central and South America. People here were like us, which attracted us to it.”

Anita created their home’s tropical garden of hundreds of varieties of plants, such as orchids, heliconias, gingers, and bamboo. She was born with a green thumb, probably inherited from her mother, whose lakefront botanic garden at Hotel Atitlán is a wonder to behold. “Anita’s out there eight hours a day, almost every day,” John notes. “We also have a full-time gardener, and sometimes a second, to keep up with what she’s created. Our most stunning addition, besides the garden, is the 40-foot-long infinity pool, which fades into the Pacific. We also added a thatched Balinese-style roof covering a 700-square-foot deck, and an outdoor bar made from local wood, two carved Easter Island moai-style statues, and a tropical jungle mural by a local artist next to it.”

Another addition: an open-air, covered chef ’s kitchen with lots of storage. “We could probably live three months on the food we have—we’re set up so we don’t need to go buy food every week,” John says. They’re a 90-minute drive from Santiago, a city of 70,000, which has large well-stocked supermarkets, PriceSmart (like Costco), banks, hardware, building supply and electrical stores, restaurants, and bars. (A new road being built will cut the drive to 45 minutes.) Panama City, where the airport is located, is a five-hour drive away.

John and Anita also enjoy another Panama perk: the Pensionado visa for expats who have a pension or Social Security income of at least $1,000 a month, and which entitles its holders to big discounts on airfare, in-country transportation, entertainment, restaurant meals, professional/technical services, even home loan closing costs.

Expat life takes a little adjustment, John says. “Rent first, try things out, get a feel for a place,” he recommends. But he and Anita are addicted to the global lifestyle. So much so that they’re selling up and moving on. The open road beckons them once more.

“We’ve been here for eight years of designing, planting, and manicuring. At our age, it’s becoming more than we want to manage,” says John. He and Anita haven’t yet decided on their next location. They may travel to parts of the world new to them, and rent for three to six months in each.

Or, they may buy a boat to cruise the Great Loop, a 6,000-mile system of waterways in the eastern U.S. and Canada that ranges from the Atlantic and Gulf Intracoastal Waterways to the Great Lakes. They’re open to what comes up. “We’re both adventurers and explorers who look forward to the ‘next place,’” John says enthusiastically.

Panama Real Estate: Get More Bang for Your Buck