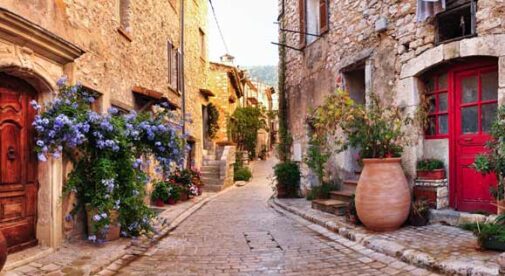 The World Population Review, which tracks peace and safety around the world, states that Europe has some of the most secure countries on the planet, and is the only region, since 2009, not to see a decrease in its safety rating as a whole.

France isn’t as highly ranked as neighboring Spain or Portugal, but does get good marks on the index for general peace and stability, scoring a 1.8 on the matrix. As a comparison, Iceland, ranked the safest county, scored a 1.1.

As a resident, or traveler to France, you can rest assured that you are coming to a safe place. There is no right to bear arms in France, and acquiring a gun as an individual is a long and complicated process, with few ever seeing a firearm.

While you can feel safe from violent crime, the country is, of course, not crime free. There is little need to be concerned about bodily harm. Crimes that occur in France are centered around petty theft, home robberies, the drug trade, and isolated turf wars in inner-city neighborhoods.

Is it Safe to Travel to France Right Now?

France is the most visited country in the world, and the tourism industry has recently seen a revival of travelers that are approaching pre-COVID-19 levels. In our recent travels, we have visited all corners of the country and encountered no issues or problems—apart from overcrowding on trains or the metro during peak travel times in July and August.

Follow the same safety measures in large cities as you would at home—by keeping a close eye on your belongings and paying attention to your surroundings in heavily touristed areas—you’re unlikely to experience any criminal activity in France.

All forms of public transport, including trains, have police and/or public servants known as “contrôleurs” who monitor for criminal activity. If you feel unsafe at any time, or suspect criminal activity, you can flag an attendant or security professional.

You can feel safe as an expat moving to France. There are a few things to worry about apart from being exposed to theft or petty crimes.

Scoring very low on violent crime, the types of offenses most frequently cited in France include petty theft, break-ins, drug trafficking, and scams—in person or over the internet. You’re more likely to encounter these criminal activities (apart from scams online) in the neighborhoods of larger cities already known to the police. For example, the so-called “quartiers nord”, north side of Marseille, is well-established with local authorities as a site of drug trafficking and petty theft. Located on the outskirts of the city, there is little reason to find yourself in such an area. As with major U.S. cities, the rule of thumb is to avoid such neighborhoods while traveling to, or living in, France.

Home-invasion-style crimes are practically unheard of in France, but break-ins are a continuing issue in the country—particularly in the south of France. As the French take fairly frequent vacations, burglars will wait for the resident(s) to leave for the weekend, or longer, to attempt a break-in. If you are a frequent traveler, you can circumvent this issue by installing a home alarm system. Several reliable alarm and security companies exist across the country.

The local police will also patrol your neighborhood, and keep an eye on your home, if you inform them of your absence.

Precautions For Women Travelers in France

Cities in France are safe for women, but travelers should exercise caution late at night and on public transportation—at all hours of the day. Make sure you are aware of your surroundings, like you would do when traveling on your own in any country.

Generally, France is seen as quite a progressive place for women, particularly in Europe, with equality being at the forefront of many discussions on social issues.

Keeping Your Money Safe in France

Once you have established residency in France, it’s fairly easy to get a bank account. There are many brick-and-mortar locations, as well as online banking options. As an expat, you can set up an account with the online bank Wise before moving to France. In this way, you will already have a bank card you can use on arrival before you get your first French account.

These practices are the surest way of keeping your money safe in France. Several advisors and money managers—many English speaking—can help you with investment questions.

French roads are very well-maintained and taken care of. Due to a toll road system, that requires payments on travels around the country, the highway system in France is very safe.

That being said, the French do tend to drive faster than Americans, and the country has many roundabouts on back-country roads and in the center of cities and towns.

It’s best to brush up on some of the French driving regulations, and check speed limits on the freeways and highways before venturing on the road.

Is Drug Use Allowed in France?

Drug use is not currently allowed in France. France is still in the decision-making phase of making medical marijuana legal.

The use of CBD oil and related products is legal, and you will find several CBD shops around France in all major cities, towns, and even some small villages.

Is Prostitution Legal in France?

Prostitution was made illegal in France in 2016, and violators can be fined $1,485

The industry does still operate clandestinely and was very much a part of French culture up until very recent times. You may see prostitutes working on the streets in the suburbs of larger cities.

Visitors and residents should apply the same safety measures they would use back home when swimming in France.

While France does have lifeguards to watch over swimmers at the beach, you may not find a lifeguard to cover every section of the beach. Other beaches, those that are less developed, or require a short hike to find, will be unmanned. If you have any concerns about the safety of the area, it would be best to avoid swimming in these areas.

At public beaches, France has a beach security system. If the weather conditions are stable, and the water is safe to enter, the local lifeguard will display a green flag. If the conditions are a bit uncertain, he or she will put up a yellow flag—you can enter the water, but with caution. If you see a red flag, swimming in the sea or ocean is not permitted that day.

There are rules regulating home swimming pools. They must have a cover when not in use and it is recommended to install an alarm system. If the pool in a hotel or public area does not have a fenced-off barrier to prevent children from entering, the establishment is required to have a lifeguard present at all times.

As previously mentioned, if you follow the same common-sense precautions you would back home, you’re unlikely to encounter any crimes in France.

If you are a homeowner, or rent an apartment in France, make sure that your home is secured when leaving on vacation, and better still, ask a neighbor to watch over your place while you’re away. As a homeowner, we would recommend installing an alarm. You can contact local companies, or order a system online as you would in the U.S., i.e. on Amazon or another comparable site.

If you are going to have work done on your home or apartment, updates or renovations, it’s a good idea to find skilled laborers based on the recommendations of others. For example, you can ask neighbors, or even go to your local town hall, or expat association, to find reputable contacts. Although few scams are running in France, giving workers access to your home who have not been previously vetted, is not a good practice. While most renovations proceed without incident, there have been some instances of break-ins by individuals associated with the work.

On the health and safety front, you can drink the water in France in public spaces, and if there is running water that is undrinkable, there will be a sign denoting it as such.

Lastly, you will find some people living on the streets in big cities who might approach you asking for some spare change. While the majority are completely harmless, avoid engaging with anyone approaching you at major tourist sites in Paris. Although this seems to have decreased in recent years, scam artists can use this as a tactic to distract you in an attempt to take your wallet or personal belongings.