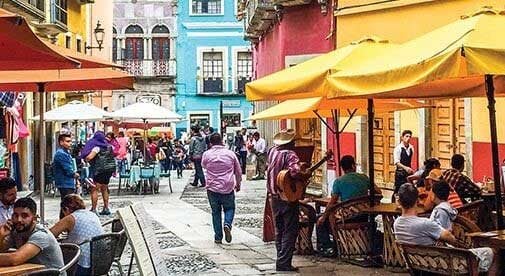 A man sells giant spring onions from the trailer of his pick-up, while watching a duo of cowboy-hatted musicians play for their audience, beers in hand. Farm workers preen fields of corn, bulging blue agave, and brilliant green nopale cacti between the sierras of Guanajuato and Querétaro. I watch as traffic builds on the carriageways leaving Puebla; locals start their day, while the formidable Popocatepetl volcano silently puffs in the background.

After three years in Mexico, my residence was expiring. Although I’d traveled extensively, there were still a few cities to visit before leaving. So my husband, Sergio, and I set ourselves a challenge: Six days, five cities, and a budget of $650 for two. We exceeded our own expectations and even came home with change.

Our itinerary was an intense whirlwind tour of central Mexico. But it was these slices of quintessential Mexican life between stops that stitched the seams of our trip, making our experience richer than just any multi-city break.

Puebla, Mexico City, San Miguel de Allende, Guanajuato, and Querétaro: each city a jewel in Mexico’s crown, and each is so overflowing with beauty that even a taste feels like a feast.

With only a backpack, comfortable shoes, and a determination to see and sample as much as we could, we committed to rising early, going to bed late, and sticking to our plans. Was it tiring?

Yes. Was it worth it? Absolutely!

Surprisingly, our best friend was public transport. Mexico has excellent luxury coach services, often including a packed lunch, single-file seating, and personal entertainment systems. For a total of $120 for two, we traveled comfortably—if not in high style—between all our destinations. Our longest journey was four hours between Mexico City and San Miguel. For under $20 per route, we rested and avoided the stresses of traffic. Through huge windows, we drank in the diverse rural landscape and then leapt back into action at the next city.

Our other friend was Airbnb, which for six nights came to just $160. It’s a great way to meet locals, get first-hand recommendations, and a feel for living somewhere else. Booked a few days in advance, for an average of $25 per night, our accommodation ranged from a decent double room in a hip apartment in the heart of Mexico City, to a luxurious, traditional, two-bedroom apartment in Guanajuato (I was ready to move in there and then). Somewhat removed from the picturesque scenes of the town itself, our $30 studio in San Miguel de Allende offered another glimpse into local life, including crowing cockerels, dogs, and curious neighbors.

It’s so inexpensive to eat well in Mexico that we ate out for every meal, making this a gastronomic tour. We devoured sizzling memelas on a street corner in Puebla for 50 cents, tri-colored chiles en nogada in Guanajuato, and lamb consomé and tacos de barbacoa in Querétaro.

Starting with cooked breakfasts every morning, we indulged our insatiable appetites for genuine Mexican food. And we rarely spent more than $25 on a meal for two—usually it was closer to $10.

We rarely spent more than $25 on a meal for two.

We walked the bustling city of Puebla with its manicured parks, stately architecture, and innumerable churches. At night, we people-watched near the zocalo (plaza) while feasting on cemitas poblanas, huge meat and Oaxacan cheese rolls, washed down with local beer and banter.

Both majestic and lived-in, Mexico’s capital feels like a blend of Madrid and New York. There’s nothing for it but to immerse yourself in the crowds, absorb the frenetic energy, and prepare to see it all. We explored on foot and by metro—the Museum of Fine Arts and the government’s seat at the zocalo are works of art themselves. We lined up with knowing locals for steaming tacos de canasta. From the 45th floor of the Torre Latino, we enjoyed stunning panoramas of the immense city over dinner at Miralto.

We climbed the steep, cobbled streets to the viewpoint of San Miguel de Allende. Then a friendly local offered us a ride back downhill in the back of his truck, which we excitedly accepted. At night we hovered around the city’s illuminated cathedral, enjoying performances by a brass band, and sampling roasted sweet potatoes from Maya vendors before watching the pristine city twinkle below us from a rooftop bar.

Then Guanajuato rose up before me and I got my second wind. We roamed the streets of this colorful, lively student city, blown away by the culture and fun to be found around every pretty, winding street corner. The morning after a night of unavoidable festivities, we boarded the funicular to witness this unmissable gem from a height.

And finally: Elegant and confident Querétaro. We strolled its European-style plazas, drank coffee in its hipster cafés, and ate ice cream in its welcoming Alameda Park. At night we waited with the crowd to catch its impressive 75-arch aqueduct lighting up.

Despite our time and budget restrictions, our trip felt like a luxury tour. Mexico unfailingly demonstrated its generosity, courtesy, and professionalism. It was an exhilarating new way to travel. I challenge you to do the same.