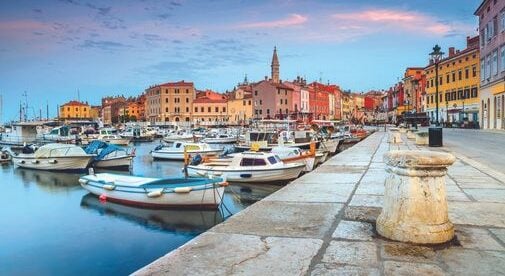 I was not expecting that.

I’d just driven an hour south from the Croatian coastal resort of Rovinj, where my wife and I were spending a week for a late-summer family seaside vacation. As she sunned herself at the beach, I hopped into our rental car to meet an expat living in Pula, the most southerly town on the Istrian Peninsula, which juts out of northern Croatia into the Adriatic.

I parked near Old Town and walked the rest of the way into Pula. As I came to a roundabout, I turned to see an ancient Roman amphitheater right in front of me. It looked resplendent, in far better condition than Rome’s Colosseum.

Some Googling confirmed that I’d stumbled across the best-preserved amphitheater in all of ancient Rome’s footprint. A totally unexpected delight… and one that exemplifies this part of Croatia.

It turns out, the Istrian Peninsula is basically Italy. More precisely, it’s Tuscany on the Adriatic—only cheaper.

Olive groves and vineyards ebb and flow across meandering hills. Picturesque towns and villages pop up here and there, almost always punctuated by an ancient church bell tower done up in a style reminiscent of St. Mark’s Cathedral in Venice. Menus are dominated by fresh-from-the water seafoods and all kinds of pastas, and high-quality, expensive wines that come from local families who produce a small number of cases per year.

I’d come to Croatia to experience this, but also to figure out if Croatia is a place I might want to live, or recommend to others who are looking for a way to live and work in Europe now that Croatia is one of the newest members of the “digital nomad visa club.”

But there’s a caveat: I would not choose the new digital nomad visa as my path into the country. There’s an easier, less time-consuming route…

Croatia is one of the latest countries in Europe to offer a digital nomad visa. This type of visa, aimed specifically at workers who have the freedom to live and work anywhere in the world, has become a defining trend of post-pandemic life across the globe.

Over the past several years, countries from Caribbean island nations to Southeast Asia hot spots, from Central American beach destinations to the Old World havens of Europe, have been rushing out their own spin on digital nomad visas… some better than others.

Croatia launched its take on these visas in 2021. The offer is a simple one: Come to Croatia, live here for a year and experience the culture of a place that was once part of the Roman and Venetian empires. Work, earn remotely, travel the region…and then move on to your next destination 365 days later.

As far as offers go, that’s not horrible for someone who is truly nomadic, or someone looking for a 12-month sabbatical in Europe. A year in Croatia, particularly in Istria would be well spent. I am thinking seriously about it myself.

However, I would not pursue Croatia’s digital nomad visa, and it’s not just me advising that.

I interviewed several remote workers while in Croatia, including Melissa Paul, an American who last lived Stateside in Philadelphia and who was the very first person to obtain Croatia’s new digital nomad visa.

Melissa’s situation is a bit unique in that she was married to a Croatian for several years and owns a house in Labin, in the hills of southern Istria. But for various reasons, she wanted to apply for the digital nomad visa when it was released.

“The problem,” Melissa told me over coffee at an al fresco café in the Lilliputian center of Labin, “is the upfront costs. It’s very expensive.”

Here’s what she means: You need to prove you have in the bank about 18,000 kuna, the local currency, for each month you plan to spend in Croatia. That’s roughly $2,400 per month. So, if you want to spend a full year in Croatia, the digital nomad visa limit, you’re looking at proving you have at least $29,000 in the bank. Not a problem for some people, but certainly a challenge for others.

You’ll also need prepaid health insurance for the entirety of your stay, which is fairly common for these kinds of visas. And on top of that, you need to show that you have pre-paid your rent for as long as you expect to be in the country. Rents here span a huge range, depending on where you want to settle. Coastal regions, particularly Dubrovnik, Split, Pula, and Rovinj can be on the pricier side, especially in high season (mid-June to mid-September) when lots of European tourists flock to the warm Adriatic waters.

Rents for Western-style, two-bedroom apartments in convenient locations and with sea views start at about $800 per month and go much higher as you approach the sea or Old Town city centers. In the smaller towns in the countryside and up in the hills, you can find nice apartments in the $400 to $600 range.

Moreover, the visa expires after a year. It cannot be extended nor can it lead to a long-term residence permit. So, Croatia is not a destination for anyone who wants to build a permanent life in Europe.

And then there’s the paperwork.

Sam Carey, who works remotely for an insurance technology firm, says the application process can be draining.

“Nothing seems to be definitive,” he says, noting that it took over four months of online applications and in-office visits sort his digital nomad visa. “All communication is in Croatian. Forms you need are not always listed on the website. Sometimes your documents need to be notarized, sometimes not, but that’s not quite clear until you turn it in and then find out it’s wrong.”

He has been in Croatia now for nearly his full year (his visa expires in January 2023), and though he loves living here, he says, “I won’t be in a rush to come back and go through that paperwork again.”

The bureaucratic hurdles aside, both Sam and Melissa love living and working in Croatia.

The digital nomad scene “is great,” Sam says. “I’ve been surprised by the number of Americans I’ve seen here.” He has spent time in Split, one of the favored coastal cities… in Zagreb, the national capital…and in the two major cities in Istria—Rijeka and Pula, where I met him in the lively center of the city.

Melissa echoes his words, adding that she has “built an incredible community here of locals and expats. My lifestyle is rich and vibrant. Lots of wilderness for hiking and outdoor enthusiasts. The sea. Mountains. It’s really safe, even for a single woman walking around at night. It’s just a beautiful, wonderful lifestyle.”

Croatia offers another visa that allows you to live in the country for up to a year. The primary requirement is simple: Prepay your rent for however many months you want to stay.

It’s a far simpler, less paperwork intensive process. You just need to find an apartment you like, pre-pay the rent for 12 months (or less), and then apply for a visa that allows you to live locally for that period of time. With this approach, Croatia becomes a gorgeous base from which to explore the rest of Europe, the Middle East, and North Africa…or to just chill on the scores of beautiful beaches from Istria to Dalmatia.

You could even work as a digital nomad because, well, who would even have a clue?

You will still have to splash out a sizable wad of dollars to pay the rent, and you will need to show proof of that by supplying a valid rental contract, in Croatian and notarized locally.

Moreover, you will also need to prove sufficient income, but it is a far tinier amount—only about $465 per month, which most digital nomads and retirees can easily prove.

As well, you will need the usual suspects of documents including passport photos, proof of health insurance, an application form, and proof you’re not a scallywag on some police department’s most-wanted list (for Americans, that’s a criminal background check from the FBI).

To begin the process, the best approach is to show up in Croatia, where you can stay 90 days on a tourist visa. Spend your initial time finding where you want to live and securing the rental contract. Then, head to the police station in the district where you want to live (the Ministarstvo unutarnjih poslova, or MUP) and begin the application process. If you can, bring a native Croatian speaker with you.

Tell them you want to apply for an “other purposes” visa for temporary residence based on “prepayment of rent.” They will give you the list of documents you need to provide (primarily what I’ve detailed above), and off you go.

The process should take just a few weeks, far less time than is necessary for a digital nomad visa.

And with that…you’re a legal resident of an ancient, affordable, and picturesque country for the next year.

Despite his paperwork headaches, Sam told me, “This really is a wonderful country. Safe. The people are lovely. I will be back…when the digital nomad process is improved a bit.”

Jeff D. Opdyke is the editor of The Global Intelligence Letter, IL’s guide to personal finance. Based in Prague, he spent 17 years at The Wall Street Journal and today writes about international investing and lifestyle for IL. Check out his free e-letter, Field Notes at IntLiving.com/FieldNotes.

Croatia On A Budget: How To Live Like A Local In This Adriatic Gem