Closer to Cambodia and Laos than it is to Bangkok, the Isaan region is a forgotten Thai paradise, deep in the Mekong Valley. ©Pressdigital/iStock

My wife, Vivien, and I never miss the opportunity to hit the road and get out and about in Thailand, particularly when the route takes us deep into lesser known parts of the Thai Kingdom.

While Thailand is one of the most visited countries in the world, its largest region—nearly one third of its landmass—is still off the beaten track. Amazingly, this area is missing from the regular international tourist trails, even though it’s home to Phimai—an ancient Khmer complex to rival Angkor Wat—and is a mere bridge crossing away from neighboring Laos.

We are not talking about some barren wasteland or desert. Occupying Thailand’s northeast, the region is home to a third of Thailand’s population and four of its major cities. It’s known as Isan, Isaan, Issan, or Esarn (depending on who’s spelling it).

Our travels took us from the southern corner of Isaan all the way to the Thai/Laos border. We discovered a region full of surprises and potential for the more adventurous expat.

Nakhon Ratchasima—often called Khorat, after the plateau on which the majority of Isaan sits—is the southern gateway to the region, with an ancient walled city center and a protective moat.

It’s a busy and thriving city, with large universities, quality healthcare options, and an active expat community. I certainly liked the vibe of Khorat and what it offered, though I would need to brush up on my Thai language skills if I were to consider living there.

Three vast and modern shopping centers—which would look right at home in central Bangkok—satisfy the most jaded shopper’s needs. The recreational facilities were a revelation. From quality golf courses to the massive Bung Ta Lua Park just a few miles from the city center, Khorat provides plenty of opportunity to keep active. The park offers miles of cycling and walking paths, lawns, shaded areas, and a lake. It’s a gathering place for locals especially early morning, late afternoon, and early evening.

Khorat’s dining options include all the typical street food stalls and small family cafés you’d expect in a Thai city, but at prices much lower than what we’ve become used to where we live (in the upscale beach resort of Hua Hin). One option that particularly caught our interest was the 100-year-old market up near the central train station (and Catholic school). This long, wide laneway is lined with old teak-timbered eateries, each offering a distinct dish.

Row after row of simple tables and chairs fill the center of the laneway. Choose what you want to eat from any of the food stalls, pay, and give them your table number. The food is delivered to you as soon as it’s cooked—typically within a matter of minutes. We sampled three different Isaan-style dishes, which we happily washed down with a cold beer. The bill came to $10, for the two of us.

On another evening we bought dinner for Sebastian Brousseau, a Canadian lawyer we had befriended. Having called Isaan home for nearly 15 years, Sebastian has a deep appreciation for the region. “It’s changed my approach to life. I live very much more in the moment now and don’t let work dictate everything,” he says.

We ate at an upmarket restaurant near his central city apartment. On offer was a Thai fusion menu and boutique beers from around the world. Dinner, which involved several courses of food and drinks for Sebastian, his partner, Vivien, and myself came to a total of $66.

Two must-visits are Phanom Rung and Muang Tam. Within a few miles of each other, these Khmer ruins are of the same era and architectural style as Cambodia’s Angkor Wat (the Cambodian border is just 30 miles away). Phanom Rung sits atop an extinct volcano and has far-reaching views from the many vantage points of this well-maintained and preserved historical site. We saw a good number of Thai visitors at both sites, but no other foreigners.

Another point of interest, 20 miles south of Khorat, is Pak Thong Chai Village—a world-famous silk-weaving village. Villagers working in co-operatives produce beautiful woven silk. Additionally, The Thai Silk Company is based there and produces exquisite fabric on a commercial level for the world market.

Heading north from Khorat to the city of Udon Thani, we took a detour to another Khmer ruin at Phimai. Dating back to the 12th and 13th centuries, Phimai was built around the same time as Angkor Wat. However, unlike Angkor Wat or Phanom Rung, this site is in much better condition, thanks to the fact it was not attacked, ransacked, or destroyed by regional conflicts. And at Phimai we experienced none of the crowds that we had when we visited Angkor Wat a few years previously…and we paid only a $3 entry fee.

Our time in Udon Thani left us thinking that it was definitely a place worth considering as an expat destination, especially for people who have already spent some time living in Thailand and had picked up some of the language. An expat club in the city has an estimated 10,000 members, as well as service clubs like Rotary actively working within the community.

Cost of living, gauged from our time there, and feedback from resident expats, suggest that this is an exceptionally affordable location. Think in the region of $240 to $350 for a furnished one-bedroom condo in the city center. Less than that if you live a little farther out. Count on around $60 a month for utilities.

Nong Khai: A Bridge to Laos

Just 30 miles north of Udon Thani is the small city of Nong Khai on the Mekong River. It’s the gateway into Laos, which you get to by crossing the Thai-Laos Friendship Bridge to its capital, Vientiane.

Nong Khai’s extensive riverside esplanade is a wonderful feature of the town. As the afternoon came to a close and early evening arrived, a street market came to life. On the river, pontoon restaurants opened for business, music booming in the hope of catching our attention. People strolled, enjoying the balmy evening.

We bumped into a couple of resident expats as we wandered the esplanade that afternoon. They extolled the virtues of living in a laidback community, yet having all the big city conveniences of Udon Thani just an hour’s drive away—including the international airport. Easy access to Laos is another huge benefit to living there. 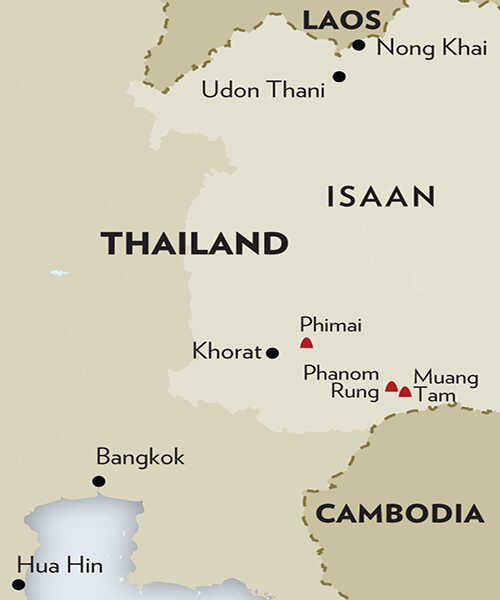 Isaan has been described as the “most Thai part of Thailand.” It offers the history of the ancient kingdom, yet its major cities have all the necessary facilities and infrastructure. The countryside between these regional cities is agricultural—rice fields, casava, and sugar cane crops.

Pockets of more adventurous expats thrive in all the cities and key regional towns. Many arrive there solo to start a new life overseas. French, English, and Americans are the dominant nationalities, but there are numerous others.

Some of these expats may be young—teaching English to cohorts of Thai primary and secondary students in local and international schools. Other expats may have started a business or are an employee of a multinational company with manufacturing facilities in places like Khorat. Others include retirees and widows, who found love and companionship for a second time and are now gaining real insights into Thai life thanks to their new relationships.

One thing is for sure, Isaan is going to see significant change over the next five to 10 years. The first stage of a high-speed rail network that will eventually link Bangkok to Nong Khai will see Khorat the first stop on the route. The first train is expected to run from Bangkok to Khorat by late 2023.

A new north-south, high-speed rail line in Laos is set to open this year, running from the Chinese border through Luang Prabang to Vientiane on the Laos-Thai border. The rail link from Vientiane to Nong Khai will connect the two countries. This means high-speed rail from Bangkok through to China from about 2028. It also makes Laos a lot easier to explore. Within Thailand, Bangkok’s new central rail hub, Bang Sue Grand Station, opens this month, relegating the current 100-plus-year-old Hua Lamphong Station to a museum. Bang Sue will be the center for all cross-country and inter-country rail travel as the Thai system modernizes.

What’s the implication of these developments? Ease of travel and the opening up of new tourism markets. Opportunities for companies to relocate to these regional areas with excellent facilities for their staff, at better investment and living costs, and within commuting distance to the vast commercial hub that is Bangkok.

Isaan is at the beginning of a significant “path of progress.” For expats with an adventurous spirit, these next few years might be a great time to get in before everybody else jumps on the opportunity.

Thailand’s proposed new long-stay visa, and its attractiveness to both retirees and digital nomads, will almost certainly see increased interest in the country as an expat destination. Many newcomers will head straight for the coast, the islands, and to the bright lights of Bangkok.

That said, Isaan’s affordability, as well as the more traditional, unspoiled atmosphere of the region, will undoubtedly attract those seasoned expats and adventurous souls who seek a lifestyle that is more traditionally Asian, without sacrificing public and private hospitals, international schools, and good road links. The “missing” portion of Thailand looks set to be found soon.

Consider a Move to Thailand – The Land of Smiles