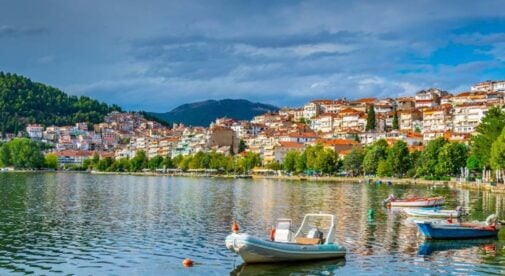 When you imagine snow-covered trees, frost-dusted streets, frozen ponds, and hot toddy drinks, you probably don’t think of Greece, and it may be a surprise to learn that this Mediterranean country has “alpine” as one of its three distinct geographic climates. During the winter months, most storms originate from the Siberian winds coming from the eastern European plains, bringing cold, dry storms and snow to many parts of the country.  From December to February, you can find fairytale winter wonderland destinations in Greece if you know where to look. Here are three destinations to help you get started.

Located in northern Greece on the western shore of Lake Orestiada lies Kastoria. With approximately 36,000 residents, this town is known for its Byzantine churches, the University of Western Macedonia, its active fur industry, and the raucous Dionysian festival called Ragoutzaria.

The average temperature falls to 5 (41 F) in winter, but temperatures can drop as low as -15 C (5 F). Surrounded by the mountains Grammos and Vitsi and featuring charming pastel-colored homes, this town offers visitors lots of opportunities for magical winter scenes, and skiers will be happy to learn the tiny Vitsi Ski Resort is only 14 miles (22 kilometers away).

What to Do in Kastoria:

If you are visiting during the winter months, time your visit to coincide with the festival of Ragoutzaria from January 6 to 8. Each year, the festival brings musical bands from all over Northern Greece with traditional brass instruments to entertain visitors who are served food, free wine, and the opportunity to dance almost non-stop for three days. The city takes on a raucous aura, and participants are encouraged to indulge and forget their troubles.

A lot of the winter wonderland scenery revolves around Lake Orestiada, so take some time to stroll along the lakeside footpath taking in impressive views of the mountains framing the town. You can also organize a lake tour by boat if you want to get imagery of Kastoria from a different perspective. There are over 60 Byzantine churches in Kastoria which also offer impressive images.

And if you have an active imagination and a taste for caves, head to the Dragon’s Liar on the eastern side of Kastoria, where you will find seven underground lakes and numerous cave rooms with eerie rock formations.  Local legend tells of a fire-breathing dragon that guarded the cave filled with gold.

To the south and west of Kastoria in northern Greece lies Ioannina, the largest city of the Epirus region. Built around Lake Pamvotida (also known as Lake Ioannina), this city of approximately 65,000 inhabitants features the Ioannina Castle and the oldest Byzantine fortress in Greece. The combined effect of the castle, the fortress, the lake, and the mountain views give the city a fairytale feel. From December to February, the average temperature can fall below 32 F (0 C), and it isn’t hard for this picturesque village to become a winter wonderland.

Ioannina is located 255 miles (410 kilometers) from Athens and 162 miles (261 kilometers) from Thessaloniki. It has an international airport (code IOA) with direct flights to Athens, Tel Aviv, Stockholm, and beyond.

What to Do in Ioannina:

To take in the scenery, begin with a stroll along Lake Pamvotida. Depending on the temperature, you might find the lake tranquil and frosty or shrouded in heavy mist. The path is set with the Old Town walls on one side and the lake with a tiny island on the other, offering a magical experience.

Next, head to tiny Ioannina Island, which is easily accessible by ferry with hourly service during the winter months and more frequent service during the summer and holidays. The ten-minute trip alone is worth the €2 fare as the journey offers beautiful views of the lake, city, and surrounding area. The ferry stops at the island’s traditional settlement, where you will find a charming square with cafes, restaurants, and shops. For the very active, you can walk the entire perimeter of Ioannina Island in about an hour, and this gentle hike gives you ample photo opportunities.

If you have time, Ioannina can serve as a base to see the surrounding areas of the Zagori village cluster called Zagorochoria and Metsovo. These villages have a unique charm, and the village of Metsovo, in particular, offers snow-covered scenes during the winter months.

A Peloponnese hotspot during the winter months because of its buzzing ski center, this charming town in southeastern Greece lies at the foot of Mount Chelmos. Beyond skiing, this village with a population of under 2,000 is famous as being the final southern stop for the Odontotos Railway Service. Since 1896, the train has been taking passengers on a scenic tour around the Vouraikos Gorge. Kalavryta itself offers rich history within a setting of small squares and charming alleys featuring stone-built houses and traditional tavernas. The weather in Kalavryta can fluctuate a lot, but weather stations report seasonal snow likely to be deepest around March, especially early in the month.

Kalavryta is located in the northern central part of the Peloponnese, about 188 kilometers east of Athens. There is no airport near Kalavryta, so car or bus travel is the most common way to get there.

What to Do in Kalavryta:

To take in the winter wonderland, a ride on the Odontotos Railway Service is a great place to start. This modern train runs the 14-mile (22-kilometer) route from Diakopto to Kalavryta in just over 60 minutes and mixes a bit of old-fashioned adventure into sightseeing.

The village of Kalavryta has several important sites, and the town has a powerful, tragic history. In 1943, much of the population was killed by Nazi troops in an act of brutal retaliation for the killing of German soldiers. On the spot of the massacre, you’ll find the Holocaust Monument reminding visitors of this tragic event and underscoring Greece’s resilience. You can visit the Holocaust Museum in the village’s main square to learn more.

Sitting above the village lies a medieval castle called Kastro Orias, roughly translated to the Castle of the Beautiful Lady. While not much remains of the castle, you’ll be rewarded for your hike up the 3,668-foot (1,118-meter) hill with a panoramic view of Kalavryta.

These are just a few places in Greece where you can find a winter wonderland. If cold weather travel is your thing, also consider Stemnitsa and Meteora for snow-covered sightseeing.

It is worth noting that the bright Greek sun doesn’t rest in the winter months. Even in cold, snowy conditions, you can expect sunny days in Greece, lifting your mood and sprinkling a bit of fairy dust on the scene.

Cost of Living in Greece with Monthly Breakdown