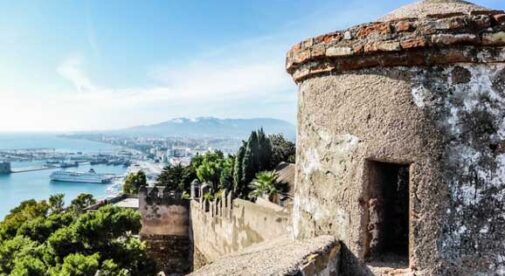 Chip was enchanted by Málaga, Spain, but ended up in Italy. Choices are part of the fun. ©Nazareen Heazle.

The first time I tried retiring, I failed. It’s simple enough: I didn’t have a plan. I didn’t think I would need one.

Retiring may be one of the most significant changes in our lives. I would rank it up there with getting the first job, getting married or divorced, or losing a loved one. Retirement may be the first time we define a significant portion of how, where, and why we want to live. The idea that we just stop working and everything falls into place did not work for me.

Interestingly, failures can give us a future direction that will lead to fun, relaxation, and enjoyment. This failure was no exception. I wanted to retire, but with intention and purpose.

How do you give yourself the space to change your embedded daily work patterns? What forces you to relax, to rethink what you want? The one thing I wanted to do was travel. So, what kind of a trip could I take that would get me entirely away, slow me down, and help me figure it all out?

Nineteen days and a cruise across the Atlantic was my first mini-retirement camp. I would fly to Málaga, Spain, spend four days, and take a cruise from Málaga through the Straits of Gibraltar to St. Maarten. No tours. Lots of free time. I wanted to gauge the cost of living: low-end bars to high-end restaurants; the price of a small, centrally located apartment in the city; the price of utilities, internet, a car, insurance, and healthcare.

Málaga was fabulous! From the Moorish castle in the middle of the city and the Roman ruins just below, to the Christmas parades, the bands, stores, buskers, choral groups, and Pablo Picasso’s home. I was enchanted.

I didn’t have a plan. I didn’t think I would need one.

And my boots-on-the-ground approach answered the practical questions. The cost of living was quite a bit lower than in the U.S. Food was just a bit less, housing was a lot less (my rent in the U.S. was $1,500 a month, in Europe it’s $840, and health insurance was so low it was hard to believe—coverage that cost $1,400 a month in the U.S. costs $907 for a full year here.)

My first day, the temperature was 65 F, it was about 8 p.m., and I was famished. I took a seat in the outside portion of a restaurant so I could “people watch.” A waiter brought me a menu—in English! I asked him how he knew. He smiled, pointed to my golf shirt and sleeveless sweater, and then at the passers-by bundled in heavy coats, hats, scarves, and gloves. The waiter was comfortable with a foreigner, and I was comfortable there. Dinner was excellent.

Generally, I prefer small towns to large cities. I like solitude more than crowds and warmth more than cold. Climate-wise I prefer four seasons to any other choice. That solved a part of the equation, but not what, how, or even where. It was time to think, plan, and contemplate.

I began to scribble notes, thoughts, ideas, places, costs, times, hopes, and dreams. I wanted to think as big as I could.

Why not have everything you desire? Isn’t retirement for fulfilling all your dreams?

I wanted to write. I wanted to learn photography. The small parts of a large picture were falling into place. Maybe what I enjoyed the most was life at my pace. Not at the speed of a job, or a client, or with the demands of tomorrow constantly leaking into my thoughts. The freedom that peace of mind creates is a stressless life, allowing us to be the best parts of who we are.

A year or so later, still trying to retire, I took another cruise, only this time from Portugal.

What did I learn? Portugal is even more affordable than Spain. The healthcare is excellent, with a large expat community to the south in Algarve. It felt slower, which I liked. I was comfortable and happy walking around, day or night. In Lisbon, I hired a driver/ guide and a car, all in one. We went to Sintra castle and north to Porto and Óbidos. By the end of my time in Portugal, I was sure I wanted to move overseas, but where?

Those cruises were the seeds of my future. They were my practice retirement camps. Ultimately, they worked because I gave myself time to think, time to create and ask myself questions in an atmosphere where nothing was expected of me, and there were no distractions. That was my key to creating a new life in retirement. It became the seed of the future.

In October of 2017, my wife, Shonna, our dog Frankie, and I moved to Rieti, Italy, where we live (on about 50% of the cost of living in the U.S.), write, and speak with those who want to learn to lead a purposeful, financially secure life in retirement.

After almost 40 years managing money as a Certified Financial Planner I was ready to shed the pressure, the expectations, and the workload. Today I write, tend to my website (Thelaughingretirement.com), and am on Facebook with the Laughing Retirement Community.

Retirement, planned for properly, can be the best time of your life. I’m a firm believer that mini-retirement adventures can make that possible.