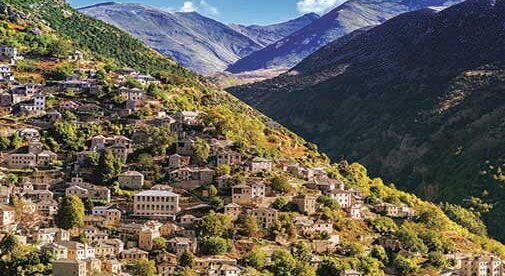 The little village of Syrrako is offically a“traditional” village due to its architecture and layout. ©FTiare/iStock

It all began, 18 years go, with a photo… hanging on the wall of Captain Jim (a retired Greek Navy Commodore) and Lucy’s lovely home on the Greek island of Syros. I was transfixed by this mysterious black and white photo of the mountain village of Syrrako. The picture shows a deep rugged mountain gorge enveloped and shrouded in heavy cloud cover, with the faint outline of stone cottages in an extremely remote and isolated village in Greece’s northwest region of Epirus.

The Captain explained that this was his ancestorial home—his father was a General in the Greek Army in World War 2 and his uncle was Konstantinos Krystallis, a famous late 19th-century poet. The allure of this isolated and remote stone village, perched on the side of a mountain at an altitude of some 3,900 feet close to the Albanian border, never left me.

Over the ensuing two decades, the Captain and I often romanticized, over a glass or three of tsipouro (a traditional Greek strong distilled spirit), about a road trip “up the mountain.” Then finally, we decided to do it.

Before I share how our long-awaited adventure played out, let me first tell you how I came to be in the house of a retired Greek Navy officer looking at photos of “hidden” villages. In my 20s, I had backpacked around the Greek islands. I loved the carefree lifestyle and warm hot summers. The island of Syros in particular appealed to me. It’s conveniently located right in the center of the well-known Cyclades group of islands, which includes the more famous islands of Mykonos, Paros, and Santorini.

The Monks’ Tipple That Inspired This Adventure

Gavin and Captain Jim’s hiking adventure to Syrrako was planned over numerous glasses of tsipouro. Little known outside of Greece, it is a spirit made from grape skins and the leftovers of wine. It is thought that it dates back to the 14th-century monasteries of Mount Athos and up until 1899 you couldn’t buy tsipouro in bottles…it was very much an “underground” drink that people made themselves as a by-product of local wine.

Tsipouro should be drunk slowly. It’s traditionally served with Greek meze (small dishes, similar to tapas) and with an ABV of around 40%, it should be sipped at a leisurely pace…and never taken as a shot. Some tsipouro bars in Greece will give you the option to mix your tsipouro with anise. But connoisseurs say it should be consumed in its pure and original form to best appreciate the flavors. For the best tsipouro experience, it should be served in a wide glass, with ice.

Over the next two decades, I took regular trips to Syros and also subscribed to International Living and read about how fellow expats were enjoying an alternative European lifestyle. In 2018 I finally decided to make a permanent move overseas. Island life is special anywhere, but I think the Greek islands have that unique appeal…the history, the culture, the hot dry summers and mild winters, and most importantly the stunning Aegean Sea.

On Syros, I have a healthy daily routine of walking into the local village for a swim and coffee with friends. This is a big attraction for me, I love swimming in the Aegean, it’s warm and buoyant.

The main town on Syros is Ermoupolis and it has an amazing collection of neo-classical buildings, offering all the modern retail and entertainment facilities, but it’s all within the framework of great historical architecture. It also serves as a major port and ferry hub, serving all the Cycladic islands, which makes island hopping a breeze.

Summer is a busy time on Syros. There are numerous cultural activities, including the Festival of the Aegean. This festival is held over a two-week period every July and offers wonderful outdoor theater and art house movies.

There is a strong and diverse expat community on Syros, so it’s not hard to have a busy social life. And there are many hiking trails on the island, so that spirit of adventure is never far away.

Syrrako is about 280 miles northwest of Athens, and the border with Albania is just over 30 miles away.

Our journey started on a modern highway out of the capital, past the Corinth Canal that runs for nearly four miles and connects the Saronic Gulf in the Aegean Sea with the Gulf of Corinth in the Ionian Sea.

The motorway took us up the west coast of Greece where we stopped for lunch in the charming seaside village of Menidi, on the Ambracian Gulf. Lunch consisted of local fresh grilled seafood, washed down with a carafe (or three) of the local wine. Our enthusiastic waiter Yorgos assured us that we were having the quintessential Greek experience at its best…eating and drinking at a taverna on a warm summer day, just feet from the sea under the shade of an old Tamarisk tree.

Soon after Menidi, the motorway ran out as we headed inland and up, up, up to our planned destination of Syrrako. A steep jig-jagging road took us through dense, Alpine-like forests of pines, conifers and fir trees. So green and lush the likes of which I had never experienced before in Greece.

For someone like myself who had only known Athens and the islands of the Aegean Sea in summer, this part of the country was a revelation. The mountains here are covered in snow in winter and there are plenty of ski fields to choose from. Even in the peak summer of August, I could see distant mountains capped with snow. Wild boar and bears roam these parts and hikers from all over the world traverse the numerous paths.

It was dusk when we rounded the last of what seemed like a never-ending series of bends on the twisting mountain road, to lay eyes on our destination. Syrrako was even better than the Captain’s black and white photo hanging on his wall back home in Syros. The village appeared to hang onto the side of the mountain, as if not manmade at all, but a natural phenomenon.

Meandering the narrow, stone streets of Syrrako, we took in traditional stone buildings, the beautiful churches, and the sense of all-pervading nostalgia, that this village has endured over six centuries in such an isolated and pristine corner of the world. And the locals were incredibly welcoming, if not a little incredulous at these tourists who would journey so far up the mountain to admire their domain.

Anna, the Captain’s daughter, and an avid hiker, planned a day hike the Epirus Trail (see box above) that took us from Syrrako, down to and across the flowing mountain stream at the bottom of the 650-foot-deep valley gorge, to the far side of the mountain.

The air down there was cool, dense and moist with the scent of pure nature. From there, we followed the narrow winding track, along the edge the valley to the neighboring village of Kalarrites.

The path itself (partly man-made and partly a natural track) was vertically challenging and dangerous in parts. It is etched into the side of the steep, rocky mountain at least 300 feet above the valley floor. There were times when we were actually underneath the overhanging mountainside.

The trek back to Syrakko was more physically challenging with a slow zig-zagging climb through dense undergrowth to the main road. Once on the main road that led gradually back down to Syrrako we were able to see the whole mountainside in perspective with the two stone villages acting as bookends to each end of the valley.

We staggered triumphantly back into the village at dusk and enjoyed an icy cold Alpha beer at one of the small local tavernas. From our outside table we were able to look back, down and across the mountain gorge that we had just traversed, with great satisfaction. Another amazing and fulfilling day of adventure in Greece. 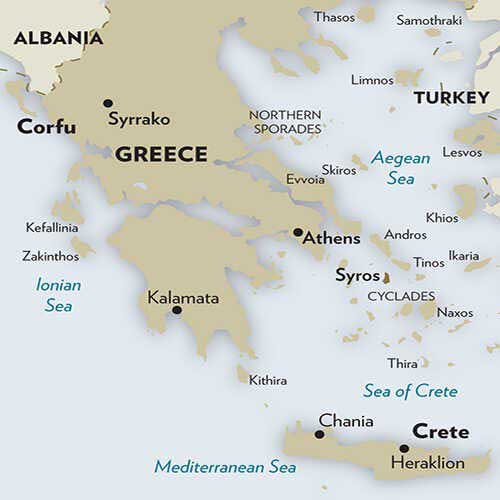 At over 280 miles long, the Epirus Trail is Greece’s single longest hiking trail. Originally designed in 2015, it’s relatively new but is already attracting in-the-know hikers from around the world. It crosses the Epirus region from Mount Gramos down to the Tzoumerka mountain range and is literally a path through history.

The trail itself is based on old roads that locals used for centuries to travel through the region, to other parts of Greece, and abroad. The routes (you can choose from hikes of varying lengths depending on your ability and energy levels) will take you through national parks, protected woodland, past monasteries, over undulating arched bridges, and into pretty, traditional villages, like Syrrako, where you can enjoy a well-deserved beer at the end of the day.

The Epirus Trail is still very much a work-in-progress are there are plans to expand it into other areas of Epirus and beyond into the Macedonia region. For more information on the trail, see: epirustrail.gr.