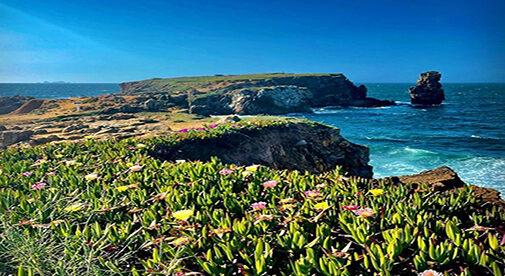 Both the Algarve and the French Riviera boast hot, dry summers and warm winters.

Each week for the past number of months I’ve been handing this e-letter over to my senior researcher, Margaret Summerfield, as she journeys through Europe is search of her ideal base…

She started in the sunny Algarve; taking in Faro, the region’s capital; the wild party town of Albufeira; and the historic town of Lagos, with its incredible golden sand beaches and endless cliff walks.

Then, after a brief stint exploring the grand summer palaces and mansions of Cascais on Portugal’s western coast, she made her way to the French Riviera… To the glitzy towns and pebbly shores of Cannes and Antibes…to Juan-les-Pins, with its Jazz Age allure…and to the chic city of Menton with its ornate palace hotels.

In the coming weeks, Margaret will be sharing the next leg of her journey, on England’s southern coast.

Today, however, I’ve asked her to take a step back and share her final verdict on two of Europe’s biggest heavy-hitter destinations: the Algarve and the French Riviera…

Which has lived up to her expectations, and how do they compare against each other as overseas destinations…

Read her take below…

After three months on Portugal’s Algarve and on the French Riviera, I’ve decided to do a comparison to help those of you trying to narrow down your shortlist for a vacation home or expat destination.

On the Algarve, my fond memories are of wandering around Old Town in Lagos…standing on cliffs watching waves crash up onto the beach far below at Praia do Pinhao…eating Christmas dinner on the balcony in the warm December sunshine.

My French Riviera memories are the Nomade sculpture in Antibes, with its backdrop of the marina, the beach, the Mediterranean, and snow-covered Alps…following the heritage trail around Menton…and picking up warm, crusty bread every day from a bakery.

I’ve whittled the comparison down to six categories, so here they are.

Both the Algarve and the French Riviera boast hot, dry summers and warm winters. It’s one of the major factors in their perennial appeal.

On the Algarve, you can expect average temperatures in Lagos for example to run from 53 F in January to 74 F in August.

In Antibes, average temperatures run from 48 F in January to 76 F in August.
If winter warmth is top of your agenda, you’ll likely prefer the Algarve. But I’ve decided this one is a draw as both locales offer warm, dry, sunny weather almost all year.

Whether you want film festivals or art galleries, beautiful historic buildings or live theater, the French Riviera is the place to go.

If you compare the towns of Lagos in Portugal with Menton in France, both have similar climates and populations (around 35,000). Lagos has an Old Town with some notable buildings and art galleries. But Menton is simply glorious, with a picture-perfect historic district, amazing Belle Epoque buildings, and a Jean Cocteau museum. There’s lots to explore, photograph, and write home about. It’s at a whole other level to Lagos.

The French Riviera has hosted the world’s powerful, wealthy, and well-connected since the 1850s. They brought the finer things in life with them. From the Opera House in Nice to the Picasso museum in Antibes, culture has always played a part in everyday life.

I have to say that the French Riviera wins this one by a mile.

The French Riviera has an excellent road and train network. It’s also served by Nice airport, the third busiest in France. There are flights from Nice across Europe. Internet and cellphone service are good. There are also modern hospitals and clinics.

The Algarve comes with good roads, a rail network (albeit not as developed as that in the French Riviera), and flight access across Europe from Faro airport. Plus, you can drive to Lisbon airport in three or so hours. Again, internet and cellphone service are good. And you’ll find modern hospitals and clinics.

This category is most definitely a draw.

In France, food is almost a religion. There’s a passion for quality, local, specialist produce and ingredients. There are entire shops devoted to truffles, or olives, or citrus…the most amazing cheese…and the bread is to die for.

Pretty much every town has a well-stocked market. There are bakeries and patisseries, stores selling roast chicken, old-school butchers, and fishmongers. On top of which, every area has its own specialty. Even the street food is a must-try. In Menton, there’s barbajuan (a type of fritter stuffed with chard and ricotta). In Nice, it’s socca (a chickpea pancake).

France is also one of the world’s top wine producers, famous for its burgundy, beaujolais, and champagne to name just a few.

Portugal has some fabulous food…from cataplana (a seafood stew) to fresh-grilled sardines to delicate custard-filled pastries…and produces wine and sherry. Produce and seafood in particular are high quality. But it’s simply not in the same league as food-obsessed France.
I’m awarding France the honor here. I ate very well in Portugal’s Algarve. But I ate like a queen in France!

The Algarve’s beaches are beautiful. The coastline is a series of low bluffs and outcrops, wrapped around little coves and long sweeps of sandy beach. Whether you want frosty drinks, a lounger and an attentive waiter, or an empty beach escape, you won’t have to go too far to find it. This is a typical Algarve beach, with soft sand: 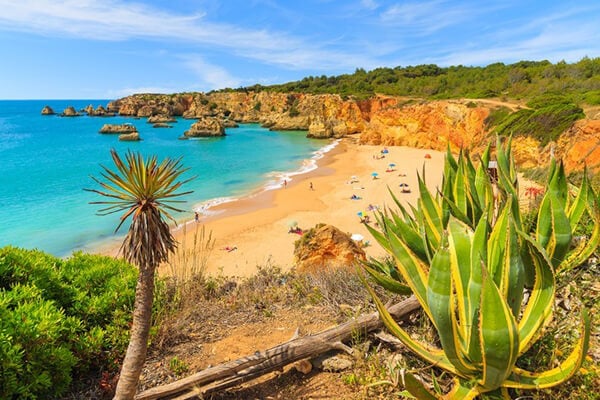 Although the French Riviera has the advantage of a Mediterranean coast, with mountains close by and dramatic views, the beaches failed to wow me. They’re often pebble or coarse sand, small and busy—nothing to write home about. The beach below in Menton is a typical French Riviera in-city beach, with coarse sand: 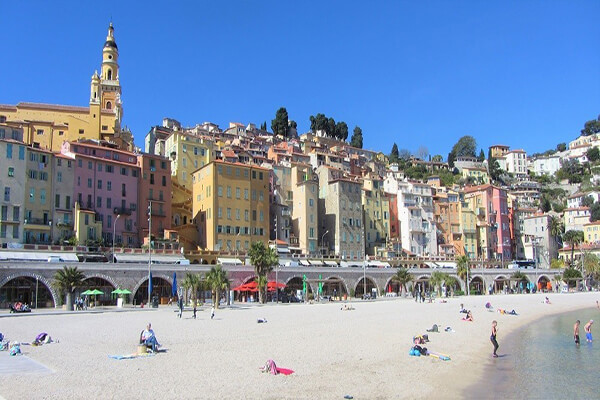 If you’re a beach lover, take note: the Riviera won’t cut it. Portugal romps home on this one.

In short, my monthly overhead costs soared when I hit the Riviera.

This is also the case when buying property. In Lagos, Portugal, a budget of €300,000 ($353,390) will buy you a new, luxury two-bed, two-bath condo. On the French Riviera, that same budget will buy you a new and very tiny studio.

If you’re on a tight budget for your living expenses or want more bang for your real estate buck, you should look to the Algarve. It’s a very clear winner.

A final note on language. You can get by in both locales without learning Portuguese or French. And you can always confine your circle of friends to fellow expats and locals that speak English. But your life will be so much richer (and easier) if you at least learn the basics. No matter how dreadful your pronunciation or grammar, locals will encourage and help you along your learning curve.

Overall, who comes out on top? The French Riviera scores highly on culture and gastronomy. The Algarve wins out for beaches and pricing. I’d happily live in either of the two. If budget is your concern, pick the Algarve. Ditto if you want endless sandy beaches. But if you love food and culture, go with the French Riviera.

Ronan says: As always, when it comes to narrowing in on your ideal overseas base, it’s important figure out your personal criteria—which characteristics are essential to you, and where are you willing to make compromises.

Similarly, if you’re looking for an investment property, you need to figure out what your investment goals are, your tolerance for risk, your financing options, and your level of involvement.

You need to be clear from the start what you want to get out of the property—and how much you are willing to put in.

The best starting point is simply to sit down with a pen and paper and profile yourself. You can use this simple guide to get you started.

For example, if you compare the French Riviera and the Algarve in terms of investment potential, you’ll find one clear winner.

While both are popular tourist destinations, the Algarve’s lower prices means your rental yields are much higher and your risk lower. Plus, as a less mature market than the French Riviera—which was Europe’s original jet-set destination—you have much higher capital appreciation potential.

For instance, in the historic town of Lagos on Portugal’s Algarve, a RETA member bought two condos as investment properties about five years ago for approximately €430,000 each. They rented them both, bringing in an average of about €30,000 (a 7% gross yield) a year each and recently sold one for €650,000. Those are some serious gains…

I’m planning my first trip to Portugal next month to see how I like it and to get the feel for the culture and shoot some photographs on the coast. I’m a professional photographer—I only shoot water. Mostly large seascapes on high gloss metal. I live in South Florida on the ocean and am considering a second small place abroad on the water as a backup plan and investment.

Thus, the trip to check out Portugal. I will be on the Douro River (Uniworld cruise) for the first part of my trip (8/22 to 8/31), then to Lisbon ending at the Corinthian Hotel. Then I have an unstructured week to explore the coast to get some exploring and shooting in.

I’ve considered the Algarve region and Cascais. After reading your article I’m leaning toward the Lagos area. Would you have any recommendations on the best areas to shoot and or to stay for this initial visit (8/31 to 9/6)?

I can rent a car or take public transportation to get there and then rent or hire a driver. I’m traveling solo. Pretty experienced traveler but I only speak English. I’ll come back and spend a month next time. This is just to get a general feel and do some coastal shooting.

Ronan says: Hi Faye, the Algarve coast is certainly photogenic—as you can see from the picture above. I’d highly recommend the coast west of Lagos, which offers dramatic cliffs and stunning golden-sand beaches. I’d suggest just renting a car and exploring it. It’s easy enough to get by without speaking Portuguese. I’d also recommend the Silver Coast, which has scenic Atlantic bluffs that are lush with interesting vegetation. Even an amateur like me can take a good photo there… 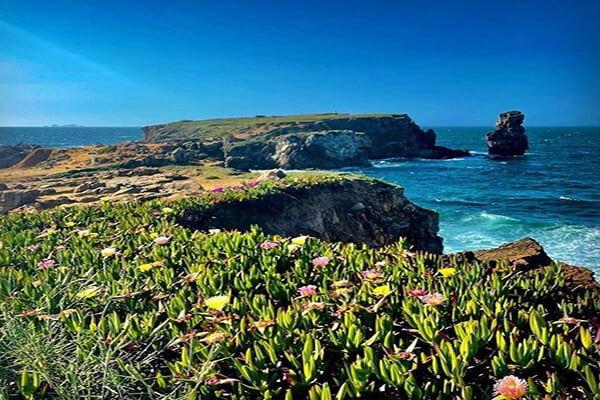 The Chic History of Menton, the Pearl of France