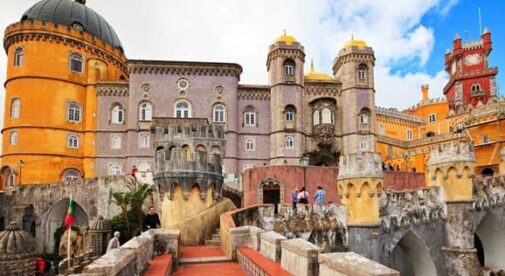 Sintra is a colorful riot of fairytale buildings, like the famous Pena National Palace.

A career as an electrical engineer in the oil industry whisked Rafael Ferreira, age 67, and his wife Claudia, 63, around the world. But when it came time to settle down and find a happy ever after, this adventurous two-some chose Portugal.

“We have been expats for 40 years,” Claudia explains. “We lived in Ecuador, Chile, Brazil, Indonesia, the U.S., Egypt, Dubai, Oman, Argentina, Venezuela, and Kuwait. When it came time to retire, we considered Belize, Spain and Italy but fell in love with Portugal the first time we visited.”

Claudia and Rafael are U.S. citizens, but have their roots in Colombia. Claudia’s father was Portuguese, so she grew up speaking both Portuguese and Spanish.

They knew they’d found their Portuguese home when they set eyes on the fairytale castles and majestic palaces of Sintra. Situated along the Portuguese Riviera, just west of Lisbon, its allure brings day trippers by the thousands.

The Ferreiras’ live just outside of Sintra in a suburb called Colares, where they can escape the crowds. Situated in a neighborhood of mostly vacation homes on large lots, this planned development is within easy reach of mountains, beaches and just a short drive into Lisbon.

“We love the arts, museums, concerts, culture and good food, which is all available in Lisbon, one of the reasons we choose this location,” Claudia says. “And there is a brand-new private hospital just a ten-minute drive away which is important as we get older.”

It was 2014 when the two landed here and a few years later bought their spacious 3,700 square feet, four-bed house. They had extensive renovations done including new floors, a central heating system was installed along with a large garden. The purchase price of the house was €800,000 ($865,000) but is now worth well over a million.

“After living in the Middle East surrounded by sand I needed greenery, plants and flowers,” Claudia explains.

One of the many things that the Ferreiras love about Portugal is its safety. Ranked number four in the world by the Global Peace Index, Claudia says that she feels very safe here. “The people are so peaceful, and they let everyone live as they wish to and never try to change anyone,” she says. Claudia spends hours puttering in her garden and playing tennis or mahjong with friends.

As seasoned expats Claudia and Rafael can offer much advice to others. “Don’t be afraid to step out of your comfort zone,” she says. “In the 1980s I went into a hospital in Cairo, Egypt to have my baby. That was the first time I really felt out of my comfort zone, but I got through it and became a better person because of it,” she adds.

“I’ve learned a lot about people and have come to realize that we are all one humankind, all wanting the same things out of life,” she adds with a smile.

Claudia and Rafael love that Portugal is close to the rest of Europe and not much further from the U.S.

Since they had accumulated quite a stash of collectibles from around the globe, they decided to ship a 40-foot container to Portugal along with a car. “The container included a large Lexus which turned out to be our biggest nightmare,” Claudia says. “It took six months to be able to register the car at a cost of €60,000 ($61,991) in taxes and registration fees. Our lawyer went to talk to a judge and still the only solution was to pay the money or send the car back to the U.S., which is what we did in the end.”

Her advice for future expats would be: “Don’t ship a car. Do your homework, come with an open mind, and realize that things are not going to be like they were in the U.S. Embrace the changes and learn a bit of Portuguese history to have a better understanding of how and why they do what they do here.”

The Best Things To See and Do in Sintra, Portugal

How to Move to Portugal