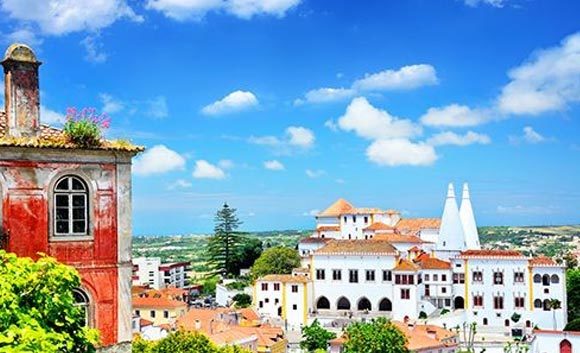 Castles, palaces, fortresses, and elaborate gardens are dotted throughout all of Portugal, but one town is a virtual cornucopia of them. Architecturally fascinating, culturally rich, it’s a magical place for history buffs, foodies, shopaholics, and romantics. It was such a favorite of Lord Byron that he immortalized it in his epic poem, “Childe Harold’s Pilgrimage.”

Sintra is located northwest of Lisbon, perched on a sometimes mist-covered hilltop surrounded by a pine tree-filled national forest. Parking can be tricky, which makes booking a day tour by bus from Lisbon appealing. Or take the train from Lisbon’s Rossio station you can be in Sintra in 45 minutes for a mere $2.60. https://www.cp.pt/StaticFiles/timetables/lisbon-urban-trains.pdf

A glorious example of 19th century Romanesque Revival architecture, the Palace of Pena is recognizable for miles due to its location on one of the highest points in Sintra and its vivid colors. The UNESCO World Heritage site is the creation of King Ferdinand II. Viennese by birth, king by virtue of his marriage to Maria II of Portugal, he didn’t leave his ancestry behind in designing the palace; it’s an ideal setting for a Grimm fairy tale.

Explore the palace’s lovely park, with walking paths, hiking trails, moss-covered rocks, and meandering streams. Visit the farm and stables, where you can arrange for horse, pony, or carriage rides.

A note on visiting hours and ticket prices: Closing times are generally earlier in winter, so please check with the park when visiting. Costs vary. For instance, the Capuchin Monastery is half the price of Pena Palace. In general, children and senior prices are one to two dollars less than full adult ticket prices. If you plan on seeing many places, check out discount passes here: https://www.parquesdesintra.pt/en/commercial-area/ticket-office-2/.

Tour the National Palace of Sintra

The National Palace has its origins in the 8th century at the beginning of the Moorish occupation. Its look today, however, is the result of extensive building during the 15th and early 16th centuries. In fact, it’s the best-preserved medieval royal residence in all of Portugal, inhabited almost continuously from the early 15th through the late 19th centuries. Stroll the interior courtyards and hear legends of the past, like the intriguing story of how the Magpie Room received its name.

Note: If you’re thinking about spending more than a day in town, walk three minutes from the palace to the ideally located four-star Sintra Boutique Hotel and check availability. A room with free wi-fi and breakfast for two runs $138 and up.

Climb the Ramparts of the Moorish Castle

During the 8th and 9th centuries, the Moors built a fortification in Sintra. It was surrendered to Christian forces in 1147, and over the centuries was remodeled and expanded. Today it offers tourists panoramic views of Sintra; on a clear day you can see Mafra, site of another major national palace.

Peek Into a Royal Hideaway

Monserrate Palace is an exotic villa dating from 1858. A former summer resort of the Portuguese court, the mansion exhibits Anglo-Saxon, Moorish, and Indian influences. Another UNESCO World Heritage site, the palace is remarkable for its eclectic gardens featuring plant species from five continents as well as lakes and waterfalls.

Plumb the Depths of Mystery at Quinta da Regaleira

The Regaleira family were wealthy merchants from Porto, who sold the almost 10 acres of property where the quinta now exists in 1892 to Carvalho Monteiro. The architecture reflects Roman, Gothic, Renaissance, and Manueline styles, while the décor showcases Monteiro’s predilections for alchemy, Masonry, the Knights Templar, and the Rosicrucian. Of special note are the extensive gardens, an underground lake, secret passageways, and an inverted tower, known as the “initiation well.”

Take a Trip to the Cork Monastery

One attraction many visitors overlook, but well worth the time, is the Capuchin Monastery. Known as “the cork monastery” (its only decoration), it’s set amid pine trees and boulders, isolated and austere, with living quarters and kitchens connected by narrow stone passages. A fascinating look at the life of Franciscan monks who made it their home, so close to—and in contrast to—the opulent way of royalty in nearby palaces.

Another less well-known attraction is the Cottage of Countess Edla. After the death of his wife Dona Maria II, King Fernando II married the Countess of Edla. Unlike the imposing Pena Palace, this time he built a charming and romantic two-story Alpine chalet, a fashionable trend in late 19th century Europe. Features include stone walls designed to look like wood, murals, glazed tiles, and extensive use of cork on bays, eaves, and balconies. The setting includes lakes and a garden featuring both local vegetation and species from around the world.

Pastelaria Gregório is one of Sintra’s oldest pastry shops. Try a queijada (like a small cheesecake) or one of their famous honey cakes.

For a quick bite between castle visits, skip the tourist restaurants and stop into a local bar. Located on a side street near the tourist office, Bar Estrada Velha is inexpensive and cozy, with a few tables for outside seating. We like the ham and cheese crêpes served with a side salad of tomato, lettuce, and fresh onions.

One of our favorite dinner spots is family-owned Cantinho de São Pedro. One of the oldest restaurants in Sintra, it offers not only Portuguese cuisine, but items like moussaka ($10) and cannelloni ($8.50). Top off your dinner with profiteroles ($4). 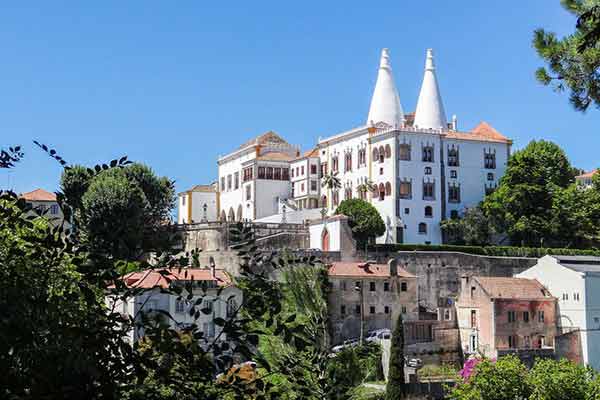 In addition to Sintra Boutique Hotel mentioned above:

Finally, before you leave Sintra, head to the Sabuga Fountain on Rua Marechal Saldanha. Legend has it that drinking from it will ensure your return someday.

I Love Castles, But Why Are They Always So High Up?

Portugal is dotted with medieval castles that sit high on mountain tops, overlooking the village below that they once served to protect. In our travels, my husband, Clyde, and I love to explore castles and wonder what it was like to live in them, so long ago. Perhaps for me, the wonderment of these magical places held a bit more fantasy…until reality slapped me in the face.

Every little girl wants to grow up to be a princess. Hollywood movies fill our heads with grandeur and the illusion of how splendid life could be in a castle. Servants, of the male persuasion, with hard bodies and rippled abs, would carry me in a hand- held palanquin up to my abode. Inside, my boudoir would be a bounty of silk dresses that would sparkle with embedded jewels. Diamonds would adorn my neck and fingers, while sparkly glass slippers would be worn on my dainty feet.

I could stand on the terrace and wave to my adoring fans below who all wished they were me.

The life of a princess is not what I once thought.

But as we explore castles here in Portugal and elsewhere, I have come to realize that the life of a princess is not what I once thought. Almost always built on a steep incline, access to castles involves walking up a rocky, often treacherous, road.

Did they not realize, thousands of years ago while constructing these edifices, that someday lazy tourists would want to visit? Could they not have built them in a more convenient place or at least installed some sort of lift system?

Clyde and I are both fit and healthy. But unfortunately for this modern-day princess, there is no entourage of servants to carry me up to the castle.

So, I put on my hiking shoes, stash some bottled water into my husband’s backpack, and trudge on up the hill.

One of our most memorable castle excursions was to the town of Sintra. Located just 20 minutes by car from Lisbon, Sintra is bursting with tourists during the summer. But since we live here, we can visit anytime.

The first time we visited Sintra was in the winter with few tourists around. The National Palace glowed, with twinkling white lights and a Christmas tree in front of its double cone-shaped towers. As I looked up from the town center, I caught a glimpse of several castles above.

The bright yellow round towers of Pena Palace flickered in the sunlight, a stark contrast to the rugged walls of the Castle of the Moors nearby. The lengthy outer walls of the Moorish fortress are topped with ramparts, and the landscape is laden with massive boulders.

Apparently, someone was listening to my plea, since Sintra has buses to bring tourists up to the castles. Pena Palace was constructed in the 19th-century Romantic style of architecture.

Outside, it offers a mix of boldly painted terraces and mythological statues, set against the backdrop of a national forest. The inside of the castle is restored to look like it did in 1910 when Portuguese nobility escaped to Brazil during the country’s revolution.

The Castle of the Moors is mostly in ruin now but once served to protect the entire region from the 8th to the 12th century. The mighty fortress was built on an exposed outcrop, which gave the inhabitants a better vantage point over the coastline and surrounding area.

But our day of castle hopping was not over yet. We saved the most exhausting for last as we trudged on over to the Quinta da Regaleira. Even though we had a car and parked close, this next estate was bigger again than the previous two. Where are my servants now?

Just to enter the estate we had to walk up a seemingly unending steep hill, leaving us gasping before we were even inside. Once inside, the estate covered nearly 10 acres, making us tired before we began.

An eccentric man known as Monteiro the Millionaire purchased the Quinta in 1892 and hired a team of professionals to create a wonderland. The five-story palace, although magnificent, pales in comparison to the gardens that surround it. A mystical wonderland of grottoes, waterfalls, lakes, fountains, stone towers, and secret tunnels gave us plenty to see. Not to mention the exotic plants, flowers, and shrubs (since, after all, this is still a garden).

There is even something called an Initiation Well with stairs that plummet nine floors, or 88 feet, underground, opening to a secret tunnel. This elaborate structure was never intended to be used for water, but instead, was constructed for the sole purpose of secret rituals. The quirky owner was fascinated with religious rituals of the Knights Templar and Freemasons and perhaps some were practiced there? Creepier and creepier.

So as our day came to an end, I was tired but grateful. This modern-day princess has her own prince charming who chauffeurs her around in their car and brought her to this magical world of Portugal that we now happily call home.

Although I wouldn’t say no to a nice pair of sparkly slippers.