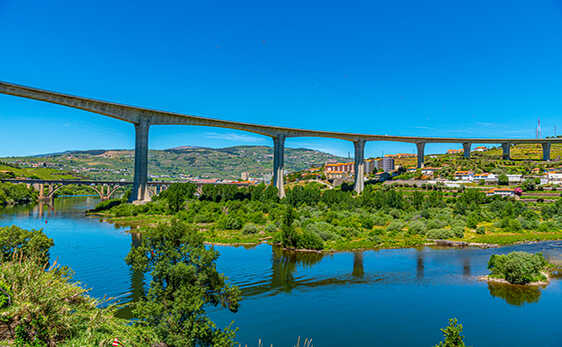 Sumptuous, green terraced vineyards extend upwards brushing against the sapphire sky. The azure-colored Douro River snakes through the alluring landscape that endlessly delights the senses. This is the Alto Douro region of Portugal, the oldest demarcated and regulated wine region in the world. For more than 2,000 years this region has been producing port, a type of wine fortified with brandy.

Nestled along the banks of the Douro River sits the city of Peso da Régua, a charming, northern Portuguese gem. With a population of 17,500, the area receives far fewer tourists than Porto, the tourist hub on the other side of the river. In 2001 UNESCO declared 64,000 acres of the Alto Douro region of Portugal a cultural, evolving, and living landscape of importance. Those fortunate enough to call the area home are blessed with impressive views on a daily basis.

Things to Do in Peso da Régua 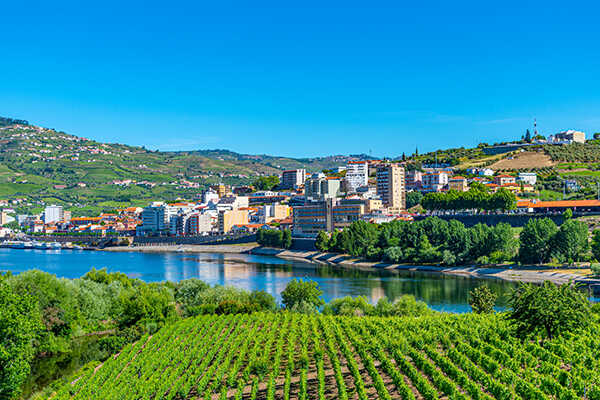 One of the best ways to experience the Douro region is to embark on a cruise. Options include half-day or full-day trips and often lunch is served on board. Some offer round-trip excursions while others leave passengers in Porto who later come back to Peso da Régua by train.

Another option is to ride the rails of the historic steam locomotive that treats passengers to Portuguese entertainment and a glass of famous port wine. Step back in time and relax in one of five adorable carriages for a traditional look at life along the river.

The most famous royal residence in the area is the Palacio do Mateus, used as a holiday home for the Portuguese royal family during the 6th and 7th centuries. Access to the palace is by guided tour only and some are offered in English. Built in 1745, a photo of the home is proudly displayed on every bottle of its famous Mateus Rosé wine. The entire area once flourished as a port and wine producer before it was moved to Porto. Despite the magnificence of this estate, Mateus Rosé sells for just a few dollars per bottle depending on size. It is light, refreshing, and delicious.

While in the area be sure to sample some sweet treats called rebuçados da Régua, a classical recipe of water, honey, sugar, and port wine. These candies are wrapped in paper to resemble tiny bows and sold in bags for one euro. Look for the ladies dressed in traditional white coats with headscarves holding wicker baskets full of these delightful gems.

To learn more about the region visit the Douro Museum, dedicated to the culture and history of the region’s specialty which is, of course, wine. Relax in one of the many restaurants to sample what the Douro is really known for by savoring a glass or bottle of wine. 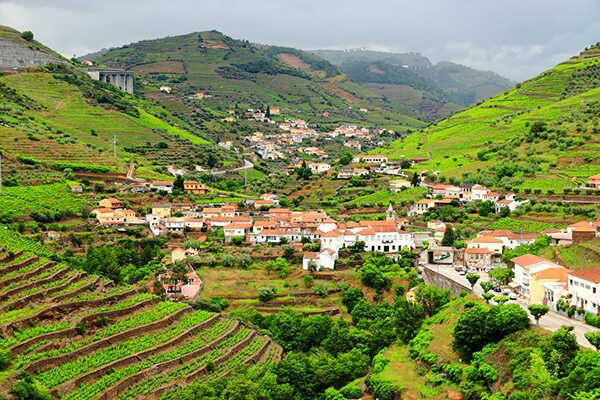 For expats looking to immerse themselves in a real Portuguese town, that offers impressive views overlooking the Douro River, cooler weather, and affordable living, this area might appeal to you.

Although the area does receive its share of tourists, most are from other parts of the country, so English is not widely spoken here. Expats who choose to live here should learn Portuguese to make their daily lives easier. The Portuguese government offers language lessons FREE to foreigners for all levels of study. Classes are held at local high schools and run alongside the school year. Other options include online private or group lessons, free websites, videos, and more.

When searching for a property to rent or buy in the area nearby towns will be included. Expect to pay about $750 for a two-bedroom apartment, another $120 for utilities (electric, water, trash), $65 for an internet/cell phone package, $100 for health insurance for two, $400 for groceries, and $200 for dining out. The town seems lacking in public transport so purchasing a car might be a good idea. A couple could live nicely on $1,600 in the area depending on lifestyle.

The city offers residents access to both public and private hospitals along with clinics. Hospital da Luz, a well-known private facility with branches throughout Portugal, can be found in the neighboring town of Vila Real. It offers a variety of specialized care, some of the finest in the country. Residents of Portugal also have access to the low-cost public healthcare system, free to join with small copays to see a doctor. In the public system the cost to see a doctor begins at $5.75 but varies with treatment.

Even in the private system throughout the country, medical costs are far less than what you would expect to pay in the U.S. To see an English-speaking general practitioner of your choice, the cost is around $41 or $70 to see a specialist. As for medications, most of the drugs available in the U.S. can be found in Portugal, often without a prescription and for less money.

Peso da Régua has an assortment of shops, restaurants, and stores that line the riverfront, while larger grocery stores can be found nearby. For more shopping options head to Nosso Shopping in the next town. This large shopping mall features a cinema with movies shown in their original language, often English with Portuguese subtitles. The cost to see a movie is less than $8. Deals can also be found that combine dinner with a movie for one low price.

For those seeking to live a Portuguese lifestyle, fully immersed in the culture and language, along with cooler temperatures and affordable living, this area might be for you.