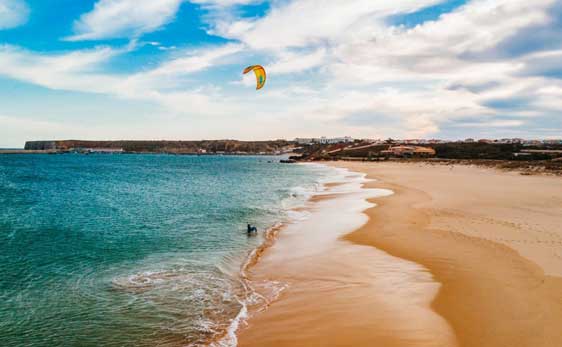 A red and white lighthouse sits on the edge of the rocky outpost, in the most south-westerly point of Europe. The wind blows fiercely over the jagged peninsula which juts out into the lively waves of the Atlantic Ocean. This precarious destination is not visited by most tourists who come to see southern Portugal’s stunning beaches, but only by those who dare to be different. This vacant landscape that feels like the edge of the earth is the sleepy fishing village of Sagres, Portugal.

The name Sagres is derived from sagrado, meaning holy, a term coined by ancient civilizations who visited. Phoenicians, Greeks, Carthaginians, and Romans believed this was the ideal gathering place for their gods, due to the absence of humans. The Romans called Sagres the promontorium sacrum, or the end of the world, because in ancient times it was the last explored point before heading out to sea.

Today the town, with a population of just over 2,000 residents, caters to surfers and thrill-seekers who pass through to experience its delightful charms. The more adventurous can hike along the precarious cliffside trails or rent a bike to cycle along trails that go for thousands of miles.

The landscape along the coast is dramatic with immense cliffs carved by nature’s raging sea. Surrounding the water’s edge, the grounds are covered with rocky boulders, so wearing good footwear is essential to traverse the craggy terrain.

Things to Do in Sagres, Portugal

Although this is primarily a surfing destination, others come to chill out on the pristine, sheltered beaches or just enjoy the funky vibe of the town. A well-paved path leads out to the Cabo de São Vicente lighthouse, a remote headland with breathtaking views.

The Fortaleza de Sagres is not constructed like most other forts since it’s basically one large wall that divides the mainland from the headland. The other three sides of the fort are protected by the massive 196-foot-high cliffs.

An important piece of maritime history was discovered here in 1928. Henry the Navigator’s mariners wind compass, called Rosa dos Ventos, is marked in stone on the ground. The large compass helped change history in the 15th and 16th centuries, and this location is where he established his School of Navigation. It was from here that he began his expeditions that took him to unchartered seas along the western side of Africa, considered to be the golden era of Portuguese exploration.

Since this is the Algarve, it’s no surprise that surrounding Sagres are numerous golden-sand beaches to suit every taste. Praia da Mareta, the closest beach to the town, is framed with limestone cliffs along its extensive sandy beach. With calmer waters than some areas, it’s the perfect spot to launch a canoe or head out to explore the submerged underwater caves.

The nearby town of Vila do Bispo has a peaceful town center with a handful of shops and restaurants and a church. Igreja Matriz de Nossa Senhora da Conceição is the main church of the community and dates back to the 16th century. With its carved, golden ceilings, blue and white tiled walls, chandeliers, and magnificent altar it’s worth a peek at this tiny gem.

Just a 20-minute drive from Sagres is the picturesque fishing village of Burgau. Fisherman can be spotted hauling in their catch from the town beach using traditional artisanal methods with buckets, gillnets, and hooks. After relaxing on the beach pick up some fresh fish to take home for dinner. Or let someone else do the cooking in one of the many beachfront bars or restaurants all ready to serve.

Another village with a sleepy beach vibe is Praia da Luz, just a ten-minute drive from Burgau. Meander the cobbled streets, sip wine at a cafe, or pull up a lounger on the beach. More of a popular tourist town, it can be busy in peak season but worth checking out.

Like most anywhere in the Algarve, English is widely spoken among the locals but learning a bit of Portuguese can surely make your daily life easier. To help foreigners learn the local language, the Portuguese government offers free lessons. These are held at local schools and run alongside the school year. Other options include private lessons or joining a study group.

Residents in Portugal will have access to the public healthcare system which is free to join. Many expats also prefer to carry private health insurance since it’s affordable and allows easy access to English-speaking doctors and dentists with no wait times. The area between Sagres and Lagos is dotted with both public and private hospitals, clinics, and health centers.

The area has several large grocery stores, Chinese department stores, and more options in nearby Lagos.

Cost of Living in Sagres, Portugal

Because Sagres is so tiny, property searches will take you to the nearby towns of Vila do Bispo, Burgau, and Praia da Luz. A one-bedroom, furnished, small village house in Vila do Bispo can be had for $600 a month. Add a bit more if you long to live closer to the beach in Burgau, where a one-bedroom, furnished apartment will run about $1,000 a month. Utilities run around $150 (electric, water, gas—depending on usage), internet/cell phone package, $65, private health insurance, $150 (per couple depending on age and health condition), transportation pass, $60, groceries, $400, dining out and miscellaneous, $300. Many expats buy a car to get around the Algarve since driving is carefree. This could be an additional cost to your monthly expenses but will also make your daily life easier. A gym membership is another option and costs run from $60 to $70 per couple. Plan on a budget of $2,500 per couple to live comfortably in this part of Portugal.